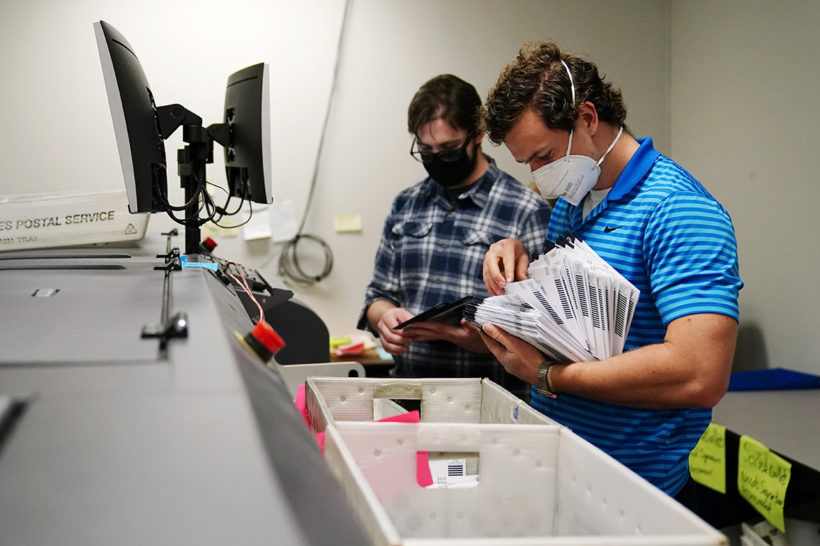 Workers at Chester County Voter Services organize mail-in ballots to be sorted for the 2020 General Election in the United States on Oct. 23, 2020, in West Chester, Pa.

(by Janita Kan, The Epoch Times) — Officials from a county in Pennsylvania said they would delay counting ballots received after Election Day that have postmarks by 8 p.m. Tuesday, citing difficulties due to pending litigation.

Vice-Chairman Ray D’Agostino with the Board of Commissioners in Lancaster County said in a statement on Monday that mail-in ballots received on Monday and Tuesday will be processed, but ballots received after 8 p.m. Tuesday to 5 p.m. Friday will be set aside until “a decision by the U.S. Supreme Court or some other direction.”

“The provisions of the Federal (U.S.) Constitution conferring on state legislatures, not state courts, the authority to make rules governing federal elections would be meaningless if a state court could override the rules adopted by the legislature simply by claiming that a state constitutional provision gave the courts the authority to make whatever rules it thought appropriate for the conduct of a fair election,” Justice Samuel Alito wrote in his statement. He was joined by Justices Clarence Thomas and Neil Gorsuch.

Although the top court rejected an application to put the state court’s decision on hold and a request to expeditiously consider a request to review the case, some members of the court said that the issues presented in the case is of “national importance, and there is a strong likelihood that the Pennsylvania State Supreme Court decision violates the Federal (U.S.) Constitution.”

But Alito added that “there is simply not enough time at this late date to decide the question before the election.”

D’Agostino told CBS 21 News that it was best to wait until the Supreme Court decides on whether to take up and case and rule on the issue before the ballots are counted. He said that once ballots are scanned in “there’s no good way to get those election ballots, the votes, out of the system.”

He said that the county was prepared to follow the Pennsylvania Supreme Court ruling but believes that they have sufficient time to wait for the top court ruling.

“The fairest and easiest thing to do is just to set them aside and make sure that if we have a ruling that we can obey the ruling to the best of our ability,” D’Agostino said.

The Pennsylvania Supreme Court ruled on Sept. 17 that election officials can accept mail-in and absentee ballots up to three days after the Nov. 3 election, granting a request from the state’s Democratic Party.

Republicans, including Trump’s campaign, have opposed such an extension, arguing that it violates federal law that sets Election Day as the first Tuesday after the first Monday in November, and that such a decision constitutionally belongs to lawmakers, not the courts.

Mimi Nguyen-Ly and the Associated Press contributed to this report.

1. What ruling did the Pennsylvania Supreme Court make about mail in ballots received after 8 p.m. on Election Day?

3. How did Justice Samuel Alito explain the reason for the court later granting a request to review the Pennsylvania Supreme Court’s decision? (What did he say about a state legislature’s authority vs. that of judges to rule on federal elections?)

4. What did the Lancaster County Board of Commissioners Ray D’Agostino decide to do with the mail in ballots received after 8pm. on Election Day?

6. What arguments have Republicans made when appealing state extensions on accepting mail in ballots days after Election Day?

7. Donald Trump won Pennsylvania by 44,000 votes in 2016 (out of almost 5,900,000 ballots cast) – a very slim margin. He was the first Republican presidential candidate to win the state since 1988. Pennsylvania will be close again this year. Judges in Pennsylvania and several other states have ruled that ballots received days after the election (3-10 days after, depending on the state) must be counted, delaying the final results possibly for a week or more.

Democrats argue that voters need extra time to get mail in ballots in due to covid and the large number of people using mail-in ballots instead of voting in-person. What do you think? Should the deadline for receiving ballots be extended well past Election Day? Explain your answer.