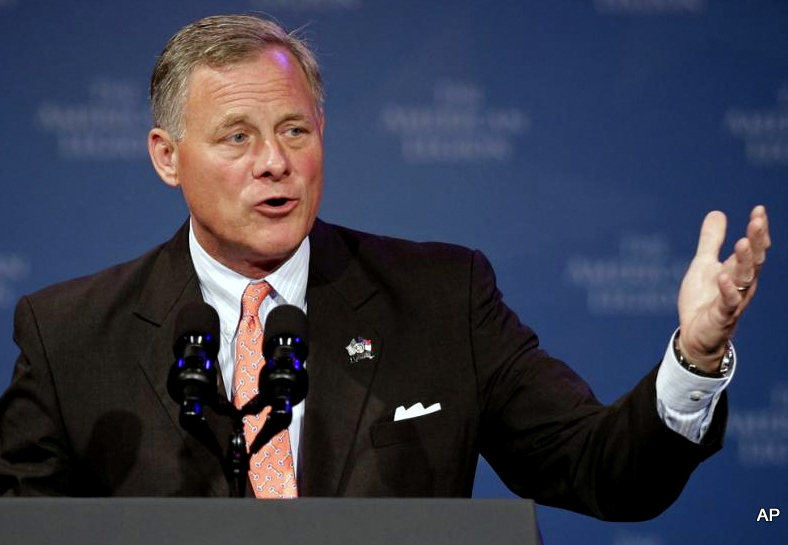 (by Damian Paletta and Siobhan Hughes, The Wall Street Journal) WASHINGTON—A growing belief among intelligence officials that the terrorists behind Friday’s Paris attacks used encrypted* communications is prompting a far-ranging re-examination of U.S. policy on data collection and surveillance. [*encrypt – to change (information) from one form to another especially to hide its meaning]

Sen. Richard Burr (R-NC), chairman of the Senate Intelligence Committee, said Tuesday his panel will launch a review of encryption use. Sen. Tom Cotton (R-Ark.) introduced a bill to extend a sweeping telephone data-collection program due to expire at month’s end.

“It is likely that end-to-end encryption was used to communicate in Belgium and France and Syria,” Sen. Burr said. He said encryption was likely because no direct communication among the terrorists was detected.

U.S. counterterrorism officials haven’t yet found evidence that the Paris suspects—who are believed linked to Islamic State—used encrypted communications to plan or carry out the attacks. But they expect that as the investigation advances they will find some communications among them were encrypted, according to multiple officials.

Since the attacks of Sept. 11, 2001, the public and policymakers have swung between emphasizing the need for security agencies to have access to data, and protecting personal privacy. That pendulum has arguably shifted more toward privacy in recent years—a position promoted by technology companies that sell products based on the promise that corporate data will be secure from hackers and government surveillance.

But initial signs suggest the Paris attacks have the potential to push it back toward security, a move opposed by many public-interest groups, especially since the 2013 revelations by Edward Snowden about government data-collection practices.

A renewed push to give law enforcement and intelligence investigators more power to decrypt commercially sold technology could set Washington on a collision course with Silicon Valley. Many technology companies have rejected law enforcement requests for “back door” coding that would give investigators access to secure communications. Software products are being marketed with a promise that they can’t be decoded, Sen. Burr said, and that might have to change. Sen. Cotton’s bill would pause the expiration of a broad phone data-collection program run by the National Security Agency (NSA), which is set to end Nov. 29, until the president certifies that a planned replacement is equally effective. [See “Background” below the questions.]

The NSA program sweeps up data on millions of calls, such as who called whom, though not the content of the conversations. Under the new version that Sen. Cotton’s legislation would put a hold on, the NSA could get the information from phone companies only if it obtains a court order. “If we take anything from the Paris attacks, it should be that vigilance and safety go hand-in-hand,” Mr. Cotton said. …

Still, the concerns about government intrusiveness that have risen on the right and left (with conservatives and liberals) in recent years, especially since the NSA program was revealed by Mr. Snowden, won’t suddenly disappear.

Rep. Michael McCaul (R-TX), chairman of the House Committee on Homeland Security, warned Tuesday against a thoughtless reaction to the attacks, and suggested a commission be set up to make recommendations to Congress.

“I don’t want us to do a knee-jerk response in legislation and make an unintended consequence,” Congressman McCaul said.

For years, intelligence and law enforcement officials, pushing for greater access to personal information, have squared off against privacy advocates and technology firms who fear government overreach. The question is whether the Paris attacks could change that dynamic.

On Monday, CIA Director John Brennan blasted “a lot of handwringing over the government’s role,” saying the resulting curbs on investigators have made efforts to track terrorists “much more challenging.” He added, “I do hope that this is going to be a wake-up call.” …

The attacks have already renewed a sharp debate over whether technology companies should install “back doors” to encrypted data [so intelligence agencies can access it]. The White House has sought the cooperation of technology companies in this area, but concluded recently that forcing the issue would only stir up resistance. That issue may now be revisited.

Sen. Dick Durbin (D-Ill.), the second-ranking Democrat in the Senate, said the U.S. needs to be sure it has the tools to fight the kind of terrorism that unfolded in Paris. “We know that we need to change the approach when it comes to the encryption of data in communications,” Sen. Durbin said. Privacy advocates argue that back doors would build vulnerabilities into programs that could be exploited by terrorists as well as overzealous government officials.

Rep. McCaul, speaking at an event organized by the Software and Information Industry Association, waved his own phone and declared, “You don’t want to put a backdoor in this device, because then you open it up to hackers, and also people think the government is in their iPhones or Androids.”

Rep. Will Hurd (R-TX), a former CIA officer, also warned against overreaction. “Our civil liberties are what make our country great, and they’re not burdens,” he said. “Encryption is good and we shouldn’t do anything to weaken it.”

—Devlin Barrett contributed to this article.

We need your support!
Student News Daily is a non-profit website. We are not affiliated with any group or parent organization. Donate through paypal, or show your support in other ways...

2. What did senators learn from a briefing by senior intelligence officials this week?

3. What do U.S. counterterrorism officials expect to find as their investigation moves forward?

4. a) Since 2001, what two positions have the government and the public had on government accessing telephone data on all phones?
b) Why might the pendulum swing back in the other direction again?

5. Senator Cotton is a strong conservative. Conservatives generally do not support this type of government intrusion.
a) What legislation did Sen. Cotton propose? Be specific.
b) What reasons did he give for why he believes it is necessary?

7. What did each of the following say about government surveillance in fighting terrorism?
-Rep. Michael McCaul (R-Texas), chairman of the House Committee on Homeland Security -CIA Director John Brennan
-Sen. Dick Durbin (D-Ill)
-Rep. Will Hurd (R-TX) b) For each, do you agree or disagree? Explain your answers.

8. What do you think:
-Should Americans give up the idea of personal privacy for safety/security to combat terrorism?
-Should Congress enact different laws to thwart the terrorist plots while allowing Americans to keep their privacy? If so, what?
-How should the 4th Amendment be considered in this debate? (Write out the words to the 4th Amendment before answering this one)
-Does it matter if the government has all of your personal information since Google and Facebook already know everything there is to know about you already? Explain your answer.
b) Ask a parent the same questions. Discuss your answers.
c) Ask a grandparent the same questions. Discuss your answers.

Limits on the bulk collection of Americans’ phone data would be delayed under a bill by U.S. Sen. Tom Cotton, R-Ark.

Cotton said Tuesday he was introducing the Liberty Through Strength Act, which would delay limitations on the National Security Agency’s bulk telecommunications data collection that is set to become effective Dec. 1 under the USA Freedom Act.

The Freedom Act was introduced after classified memos leaked by Edward Snowden exposed the NSA’s extensive data collection program. Under the law, the NSA will be able to access only targeted phone data with judicial approval.

Cotton is the only member of Arkansas’ congressional delegation who voted against the Freedom Act.

Under Cotton’s bill, the new limitations on data collection would not take effect until after Jan. 31, 2017, and upon certification by the president that the changes will have no operational impacts. The bill also would make permanent the roving wiretap provisions of the Patriot Act.

“The terrorist attacks in Paris last week are a terrible reminder of the threats we face every day,” Cotton said in a statement. “And it made clear that the president’s empty policy of tough talk and little action isn’t working against ISIS. Regrettably, these policy follies also extend to the intelligence community, whose hands were tied by the passage of the USA Freedom Act.”

Cotton said the Freedom Act “takes us from a constitutional, legal, and proven NSA collection architecture to an untested, hypothetical one that will be less effective.”

“If we take anything from the Paris attacks, it should be that vigilance and safety go hand in hand,” he said. “Now is not the time to sacrifice our national security for political talking points. We should allow the intelligence community to do their job and provide them with the tools they need to keep us safe.”

The United States Senate Select Committee on Intelligence (sometimes referred to as the Intelligence Committee or SSCI) is dedicated to overseeing the United States Intelligence Community—the agencies and bureaus of the federal government of the United States who provide information and analysis for leaders of the executive and legislative branches. The Committee was established in 1976 by the 94th Congress. The Committee is “select” in that membership is temporary and rotated among members of the chamber. The committee comprises 15 members. Eight of those seats are reserved for one majority and one minority member of each of the following committees: Appropriations, Armed Services, Foreign Relations, and Judiciary. Of the remaining seven, four are members of the majority, and three are members of the minority. In addition, the Majority Leader and Minority Leader are non-voting ex officio members of the committee.