(by Matthew Campbell, London’s timesonline.co.uk) – Just when Denmark thought the worst was over, Islamic fury has come back to haunt it with an assassination attempt on the artist whose cartoon of the prophet Muhammad as a suicide bomber had an explosive impact four years ago on the Muslim world. 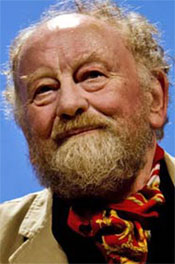 An axe-wielding Somali extremist broke into the home of Kurt Westergaard on Friday night as the 75-year-old cartoonist was looking after Stephanie, his five-year-old granddaughter.

Westergaard, whose little ink drawing of Muhammad with a bomb in his turban sparked riots throughout the Middle East in 2006, has received numerous death threats. He pressed an alarm button to summon police when the attacker entered the house in Aarhus, Denmark’s second city, by breaking a window.

He did not have time to collect the child from the living room before locking himself into a “panic room”, a specially fortified bathroom. He said the assailant had shouted “swear words, really crude words” and shrieked about “blood” and “revenge”, as he smashed the axe in vain against the bathroom door.

“I feared for my grandchild,” he told Jyllands-Posten, the newspaper that had commissioned the cartoon. “But she did great. I knew that he wouldn’t do anything to her.” He went on: “It was close, really close. But we did it.”

The attacker, who was also carrying a knife, shouted, “I’ll be back”, before going outside to confront police. He smashed a police car window with the axe and was shot in the hand and a knee when he threw the axe at an officer. He appeared in court on a stretcher yesterday to be charged with the attempted murder of Westergaard and the policeman.

Jakob Scharf, head of Danish intelligence, said yesterday the assailant had close relations to Al-Shabaab, a Somali terror group, as well as to Al-Qaeda leaders in eastern Africa. He had been under surveillance by intelligence, although not in connection with any plot against Westergaard.

The attack, Scharf said, “confirms the terror threat directed at Denmark and against Westergaard in particular”.

Angry protesters in Muslim countries in 2006 burnt embassies and stormed several European buildings in a wave of rioting and flag-burning in which more than 100 people were killed. The reaction had come after a dozen “Muhammad cartoons”, including the famous one by Westergaard, were published in several newspapers.

The drawings, which first appeared in 2005, had been intended to contribute to the debate about criticism of Islam and self-censorship. This followed the brutal murder in Holland the previous year of Theo van Gogh, the film maker, by a fanatic who resented his depiction of Islam and slit his throat on a street.

Muslims called the cartoons an insult to their religion and, as well as promoting a boycott of Danish goods, some Islamic leaders issued death threats against Westergaard and his publishers.

An affable figure with a wry sense of humour, he has been the intended victim of at least two plots foiled by police. In one, two Tunisians planned to decapitate him in his home.

Two other would-be attackers from Chicago were charged in October with planning to kill Westergaard and Flemming Rose, the cultural editor of Jyllands-Posten who has called the bomb cartoon “a great cultural icon of the 21st century”.

The threats, reminiscent of the fatwa declared against Salman Rushdie, the author whose 1988 novel, The Satanic Verses, was considered blasphemous, have made life miserable for Westergaard and his wife, a retired nursery school teacher. Like Rushdie, they have been obliged to spend long periods away from their home in various “safe houses” whenever the threat against them is considered to be high.

The cartoonist’s telephone went unanswered yesterday: he is expected, for a while at least, to go to ground under police protection.

He puts a brave face on his plight. “At my age you are not so much afraid any more,” he told The Sunday Times last year.

He has no regrets about the cartoon, whose original is locked in a bank vault, defending Denmark’s tradition of democracy and freedom of speech. He seems resigned to a life on the run. “This will go on for the rest of my life. There is no way out,” he said.

1. Who is Kurt Westergaard?

2. What was the Jyllands-Posten editor’s intent in publishing the Mohammed cartoons?

3. Islam prohibits making any images of Mohammed. How did the Muslim world react to the cartoons depicting Mohammed? Be specific.

4. How did Mr. Westergaard survive the attack against him on Friday?

The Jyllands-Posten Muhammad cartoons controversy began after twelve editorial cartoons, most of which depicted the Islamic prophet Muhammad, were published in the Danish newspaper Jyllands-Posten in September 2005. The newspaper announced that this publication was an attempt to contribute to the debate regarding criticism of Islam and self-censorship.  Jyllands-Posten published the 12 drawings after a local author said he was unable to find any artist willing to depict Mohammed for his upcoming illustrated book. The publication of the images in Jyllands-Posten has been condemned around the Islamic world, and has led to the burning of embassies and a boycott of Denmark by Muslim nations.

View Mr. Westergaard’s cartoon (2nd cartoon from the top), and an explanation of the Mohammed cartoon controversy that began in 2006, at zombietime.com/mohammed_image_archive/jyllands-posten_cartoons.

“We must learn to live together as brothers or perish together as fools.” Rev. Martin Luther King, Jr.

The U.S. is making a final pitch to Britain ahead of a UK decision on whether to upgrade its telecoms network with Huawei equipment, amid threats to cut intelligence-sharing ties

Seventeen of the expelled Saudis were found to have possessed online terrorist material; none were charged with any crime in the U.S.