(by Justin Juozapavicius, SignOnSanDiego.com) [AP] COYLE, Okla. – In most years, the dark clouds over western Oklahoma in the spring would be bringing rain. This year, they’re more likely to be smoke from wildfires that have burned thousands of acres in the past month as the state and its farmers struggle with a severe drought.

Oklahoma was drier in the four months following Thanksgiving than it has been in any similar period since 1921. That’s saying a lot in the state known for the 1930s Dust Bowl, when drought and high winds generated severe dust storms that stripped the land of its topsoil.

Neighboring states are in similar shape as the drought stretches from the Louisiana Gulf coast to Colorado, and conditions are getting worse, according to the U.S. Drought Monitor. The area in Texas covered by an extreme drought has tripled in the past month to 40 percent, and in Oklahoma it nearly doubled in one week to 16 percent, according to the monitor’s March 29 update.

An extreme drought is declared when there’s major damage to crops or pasture and widespread water shortages or restrictions.

While dozens of people in Kansas, Oklahoma and Texas have lost homes to the hundreds of grassfires that have torn through the parched landscape in the past month, Oklahoma officials said more fires caused more damage as recently as 2009. This year, the biggest losses are likely to come from the drought’s effect on the wheat farmers planted last fall and hoped to harvest in June, they said.

Almost all of Oklahoma is covered in some degree of drought. Only the far northeastern corner has escaped, thanks to a few big winter snowstorms. 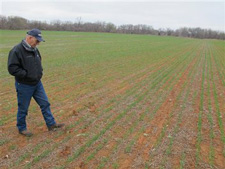 On Jim Freudenberger’s 1,500-acre farm in Coyle, only puny tufts of green poke through much of the topsoil. Freudenberger, 73, said he’s weathered several droughts and floods in his decades of farming, and he’s still hoping for enough rain in the next two months to save his crop. But even if it comes, he said, the results are likely to be a [gamble]: One of his fields was covered in foot-tall wheat and could be saved, but the plants in another field about 3 miles away had barely emerged late last month.

“If it doesn’t do anything else, it’ll make some hay,” he said.

[Photo:  March 14, 2011 – Mr. Freudenberger surveying his wheat crop in Coyle, Okla. Freudenberger is among thousands of farmers in the South dealing with a severe drought that has choked back crops, forcing some to plow up what won’t grow months before harvest.]

Mike Spradling, the president of the Oklahoma Farm Bureau, said many wheat farmers have considered just plowing under their fields and switching to another crop.

“Some places have already lost their wheat crop farther south and in the Panhandle,” he said. “In the driest parts of the state, the rainfall they have gotten, it’s not enough to make them rest easy with their crops. It’s just a bad situation.”

Paul Fruendt said he’s been farming for 25 years and he’s never seen such bad growing conditions. His farm in Guthrie in central Oklahoma got a little rain, but he said his crops will still probably run out of water within a few weeks.

“For us already, we’re going to suffer,” said Fruendt, who invested about $100,000 in his wheat. “Probably two-thirds of our gross income has been wiped out for the next six months.”

Ranchers in western Oklahoma are worried about their land too. Monte Tucker, 36, a volunteer firefighter and cattle rancher who lives in Sweetwater near the Texas border, said the grass and brush on his property are like tinder. He saw 1,500 of his 5,000 acres burn a few years ago, and without rain, it could easily happen again this year.

“Right now, it’s like gasoline,” he said of his land.

1. What is significant about the current drought in Oklahoma?

2. What other locations in the U.S. are experiencing a drought?

3. How are farmers affected by the drought?

4. How have others been negatively affected by the drought in Oklahoma?

5. Why do you think most farmers are probably reacting with resolve to the drought?

CHALLENGE QUESTION: Why do you think farmers in Oklahoma don’t have irrigation systems to water their crops when there is a drought?

Visit the U.S. Drought Monitor website for information current drought conditions in parts of the U.S. at drought.unl.edu/dm/current.html.