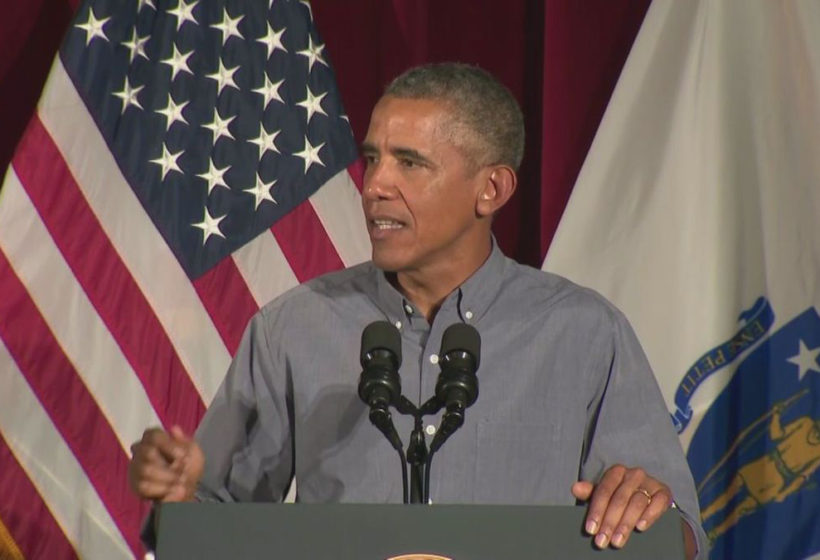 (by Jeff Mason and Lucia Mutikani, Reuters) BOSTON/WASHINGTON – President Barack Obama on Monday ordered government contractors to give their employees seven days of paid sick leave a year and, without naming them, knocked Republican presidential candidates for advocating what he said were anti-union policies.

Obama signed an executive order on sick leave, which the White House said would affect some 300,000 people, during a flight to Boston, where he spoke at a union event. “Unfortunately, only Congress has the power to give this security to all Americans,” the president said. “But where I can act, I will. And by the way, I just did.”

Starting in 2017, workers on government contracts will earn a minimum of one hour of paid sick leave for every 30 hours worked. Contractors can offer more at their discretion but must provide at least the 7 days per year of paid sick leave.

Speaking to a friendly crowd without a tie or jacket, Obama said such policies were beneficial to employers and said more worker-friendly measures, such as paid maternity leave, were needed.

“Right now, we are the only advanced nation on Earth that does not guarantee paid maternity leave,” he said.

“Now, for the men in the audience in particular, think about that. We wouldn’t even go to work if we had to carry around somebody for nine months. The human race would evaporate,” he said, drawing laughter and applause from the crowd.

Unions and organized labor are a key constituent for the Democratic Party, and their support will be critical in the 2016 presidential election.

Obama, who joked that he was glad not to be on the ballot next year, made thinly veiled references to Wisconsin Governor Scott Walker and New Jersey Governor Chris Christie for anti-union remarks and policies. He did not name them by name.

“It’s clear [President Obama] stands with the big government union bosses while we stand with the people,” Gov. Walker, during a campaign stop in New Hampshire, said in response to the president.

The executive order follows a series of measures by the White House to [mandate] paid leave. In January, Obama issued a presidential memorandum directing the government to advance up to six weeks of paid sick leave for the birth or adoption of a child, or for other sick leave-eligible uses. [An Associated Presss report explained: Unable to push much of his agenda through a Republican-controlled Congress, Obama has in recent years used executive orders with frequency to apply policies to federal contractors that he lacks the authority to enact nationwide. His aim is to lay the groundwork for those policies to be expanded to all Americans.]

Obama is also pressing Congress to pass legislation giving government employees six additional weeks of paid parental leave. Labor Secretary Thomas Perez said he could not say what the cost of implementing the seven-day paid leave rule would be to contractors. [According to a Sept. 7 Associated Press report, the White House wouldn’t specify the cost to federal contractors to implement the executive order.

The Labor Department said any costs would be offset by savings that contractors would see as a result of lower attrition rates and increased worker loyalty, but produced nothing to back that up.]

Obama also used the trip to Boston to renew his call for Congress to pass the Healthy Families Act, which would require all businesses with 15 or more employees to offer up to seven paid sick days each year.

Reprinted here for educational purposes only. May not be reproduced on other websites without permission from Thomson Reuters. Visit the website at Reuters .com. (Note: The article above was published on Sept. 7)

2. What executive order did President Obama sign on Monday? Be specific.

3. In addition to sick leave for government contractors, what employee benefits would President Obama like to mandate?

4. What will the mandated (required by law) paid sick leave cost contractors who work for the federal government?

5. Readers responded to this Reuters article with similar comments:

a) Do you agree with these assertions? Explain your answer.
b) Ask a parent the same question.

6. a) Do you think Congress should pass laws requiring (mandating) all business owners to give their employees a certain amount of paid sick leave and paid family/maternity leave, as well as require employers to increase the minimum wage they pay employees? Explain your answer.
b) Ask a parent the same question.
c) Generally Democrats believe the government should make such laws. Some argue that even conservatives in Europe support these types of measures. Do you support the argument that the U.S. should model our laws on European laws? Explain your answer.

As a former small-business owner, I can safely say that each of these policies (mandatory paid family leave, paid sick leave, an increase in mandatory minimum wage), while well-intentioned, ultimately drives up costs for small businesses, which can harm employees and endanger a business’ existence.

So why does it exist? Simple: Small businesses don’t have the same profit margins as multinational corporations. Most are constantly teetering on the edge of profitability – and 80 percent fail in their first 18 months. Given this reality, small businesses can’t always offer the most generous benefits.

What do you think of this explanation?

“America does not stand still, and neither will I,” President Obama has said. “So wherever and whenever I can take steps without legislation to expand opportunity for more American families, that’s what I’m going to do.”

Various news reports state that President Obama signed executive orders; others refer to them as executive actions.  The difference is:

…How far-reaching have President Obama’s orders and actions been and how do they compare to what other presidents have done?