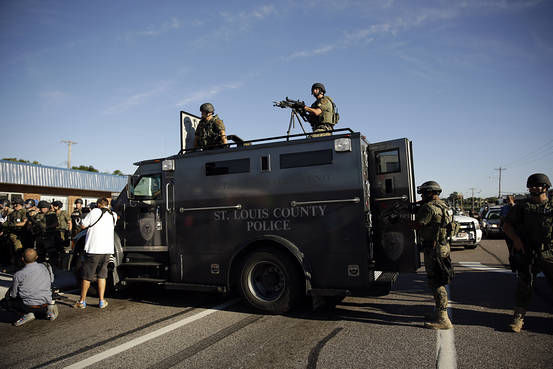 (by Colleen McCain Nelson, The Wall Street Journal) – President Barack Obama said Monday that he would ban federal transfers of certain military-style equipment to police departments as part of a broader administration effort to build trust between law enforcement and communities.

With tensions still simmering after several police killings of unarmed African-American men, the White House released a blueprint detailing dozens of recommendations for improving policing and announced that an executive order* would halt the federal provision of some military gear to local law-enforcement agencies. Prohibited equipment will include tracked armored vehicles, weaponized aircraft, bayonets, grenade launchers, large-caliber firearms and some camouflage uniforms. [*A presidential executive order is a directive issued to federal agencies, department heads, or other federal employees by the President under his statutory or constitutional powers.]

The administration announced more stringent (strict) controls for other equipment, including unmanned aerial vehicles (drones), some specialized firearms, explosives and riot gear. Law-enforcement agencies requesting such gear will be required to seek the consent of local government and ensure that personnel are trained to use the equipment.

The White House called for a review of the equipment programs last year after street protests in Ferguson, Mo., over the shooting death of an 18-year-old black man by a police officer. Images of police wielding military-style rifles and using armored vehicles to control the protests sparked concerns about the militarization of local law-enforcement agencies.

President Obama said police use of such equipment can send the wrong message by intimidating and alienating local residents.

“We’ve seen how militarized gear can sometimes give people a feeling like there’s an occupying force, as opposed to a force that’s part of the community that’s protecting them and serving them,” the president said Monday in Camden, N.J. “We’re going to prohibit some equipment made for the battlefield that is not appropriate for local police departments.”

The president last fall defended the program created by Congress in the 1990s to allow law-enforcement agencies to obtain excess Defense Department supplies, but said his administration would develop new rules and improve oversight.

A working group created by the White House conducted a months-long review and found a lack of coordination among federal agencies and no consistent standards for police departments seeking equipment.

Richard Beary, president of the International Association of Chiefs of Police, said the administration admirably tried to strike a balance between police departments’ needs and community concerns. Still unanswered, he said, is how the new standards will affect the way law-enforcement agencies get essential equipment.

“What is it going to take for officers to obtain that equipment?” he asked. “The real question is: How slow is this going to be?”

Jim Bueermann, president of the Police Foundation, a nonpartisan nonprofit, described the administration’s approach as thoughtful. The decision to ban federal transfers of certain equipment won’t preclude police departments from purchasing that gear from private vendors Mr. Bueermann noted, adding the limited list of prohibited items wasn’t likely to impede policing. “I don’t have any comprehension about why you would need a bayonet in domestic policing,” he said. …

Mr. Obama’s response to Ferguson also included creating the Task Force on 21st Century Policing. The panel’s final report, also released Monday, said law enforcement should “embrace a guardian – rather than a warrior – mindset to build trust and legitimacy.” The task force also offered recommendations for improving police policies and oversight and for strengthening training and education for law enforcement. It included a call for expanded efforts to connect police officers with neighborhoods and outlined strategies for boosting the use of body cameras and other technology.

Most of the proposals aren’t expected to be controversial, and some have been discussed by law enforcement for years. On Monday, the administration announced a grant program to provide funds to some local law-enforcement agencies that commit to implementing the task force’s recommendations.

2. What equipment is President Obama going to ban federal agencies from transferring to local police departments?

3. What equipment will be under more stringent controls? What will police departments now need to do to obtain this equipment?

4. The president last fall defended the program created by Congress in the 1990s to allow law-enforcement agencies to obtain excess Defense Department supplies, but said his administration would develop new rules and improve oversight. What caused him to roll out the changes so quickly? Be specific.

5. President Obama said police use of such equipment can send the wrong message by intimidating and alienating local residents.
a) Do you agree with his assertion? Explain your answer.
b) Ask a parent the same question.

6. Do you think there are reasons police departments need the military equipment President Obama is banning the federal government from transferring to them? Explain your answer.

7. Consider the following:
-If there is a specific reason/instance that local police would need military equipment, should the national guard be called in if that instance occurred?
-If local police need such equipment to deal with terrorists, is our military and/or FBI better trained to handle that scenario, or do the police as first responders need the equipment?
-If the equipment was needed to deal with violent gangs/drug cartels, would the police be justified in their request for such equipment?
Explain your answers.