New trend: Busloads of migrants dropped off in Mexico walk across border into U.S. 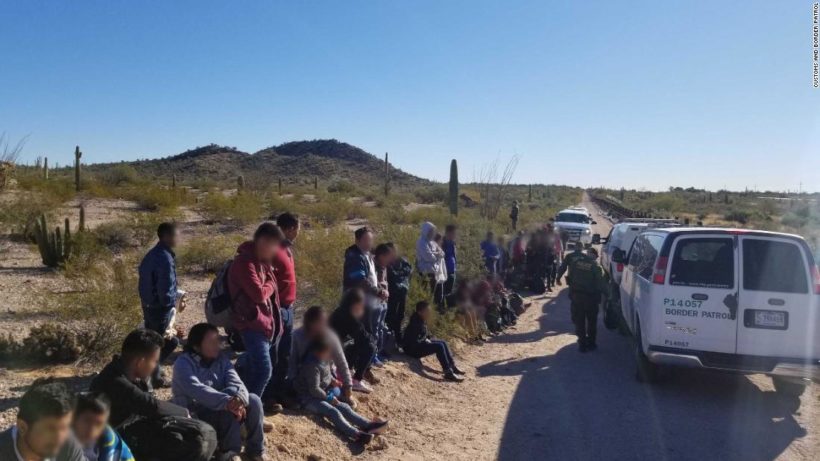 (by Geneva Sands, CNN) – In the early morning hours Thursday, several busloads of migrants were dropped off on Highway 2 in Mexico, just south of the Arizona border.

“They walked about 100 yards, climbed under and over the vehicle barrier that is the only infrastructure in that area and agents were called in to make the arrest,” said acting Tucson Border Patrol Chief Jeffrey Self.

In total, 242 people — mostly families from Guatemala — were arrested when Border Patrol agents arrived at the scene after the migrants were detected by a mobile surveillance system.

This was one of the largest single groups crossing the Arizona border over the last year, according to Border Patrol, and comes on the heels of other large groups illegally crossing at other parts of the border.

Similar to other groups of families, these migrants willingly surrendered to Border Patrol with no attempts to evade or hide from authorities.

Earlier this month, Border Patrol agents stationed in the Yuma, Arizona, sector took around 375 migrants into custody after they [crossed] into the United States. Last week, a group of 306 migrants were taken into custody in a remote part of New Mexico near the border.

In Arizona earlier this month, agents encountered a group of 85 Central Americans after they arrived by bus and illegally entered the country in the same general area of Thursday’s crossing.

In December, Customs and Border Protection Commissioner Kevin McAleenan raised concerns that a new trend was emerging of very large groups of migrants arriving at the southern border by bus and unloading in remote areas.

“So far in this fiscal year, and this has been a brand-new phenomenon this fiscal year, we have started to see extremely large groups arrive together several times, usually once or twice a week since about mid-October,” said McAleenan in December.

The trend appears to be continuing into the new year.

It was unclear exactly how the migrants on Thursday had made the journey from Guatemala to Arizona.

Of that group, 130 were children and 11 of those children arrived unaccompanied, without legal guardians.

Coast Guard medical staff, including a physician, were flown on a helicopter to the Ajo Border Patrol station to screen every child in the group and more than a dozen adults complaining of medical issues. Two children were sent to the hospital with high fevers and were later re-released to Border Patrol custody.

The “positive” impact of the Coast Guard medical assistance, which frees agents for other work and prevented overwhelming the local hospitals, can’t be “overstated,” said Self.

Echoing comments made by other Border Patrol officials, Self pointed out that the Border Patrol facilities had been designed for single men, not children.

“Basically, you just turned an adult short-term detention center into … basically, a day care center. There’s nothing for them to do there. You’ve got to watch them, you have to separate them from non-family members, you only have so much detention space,” he said.

Self told CNN that the increase in large group apprehensions is taking resources away from other border security missions, like narcotics interdiction.

The Arizona region has not seen a notable uptick in narcotics seizures, but the concern is that the large groups distract from agents’ ability to prevent smuggling, according to Border Patrol.

“The manpower that is dedicated to having to deal with the children and the families really creates a situation where it makes us vulnerable in other areas of the border because we are having to collapse in on this one incident with additional resources that were out patrolling other parts of the border,” which opens up other regions to exploitation, said Self.

Like other regions across the border, Arizona has also seen an increase in illegal crossing by families.

In fiscal year 2019 to date, Tucson Sector, which extends from the New Mexico state line to the Yuma County line, has seen more than a 231% increase in family apprehensions compared with the same period in fiscal year 2018, according to Customs and Border Protection. Border Patrol uses apprehensions as a measure of illegal crossings.

“Our agents, they embrace the humanitarian effort, but it impacts our ability to do border security versus having to do this humanitarian mission. And I would also add that most of our agents aren’t trained to do a medical evaluation,” said Self. …

Published at CNN .com on January 29. Reprinted here for educational purposes only. May not be reproduced on other websites without permission from CNN.

NOTE TO STUDENTS: This is not an issue of LEGAL immigration. Americans welcome immigrants who come here legally. The issue is ILLEGAL immigration, which is a controversial topic. Remember that most of the people who come here do so to have the opportunity for a better life and the freedom to make it happen. This is not an issue of being “unkind,” but an issue of enforcing the law. Also, in this age of terrorism, it is crucial that we know who is coming into the U.S., and for what purpose. The large number of violent drug cartels and human traffickers operating on our southern border is also of great concern. It is important to secure our borders. Those who enforce U.S. laws should not be accused of being unkind – they are being responsible. Those who want all who come to be allowed in believe that is the compassionate thing to do. Speak courteously to one another on this topic.

1. What new trend in illegal crossings into the U.S. did CBP Commissioner Kevin McAleenan warn about in December? Be specific.

2. List the locations/numbers/country of origin of the people who recently came by bus to the southern border as described in this article.

3. a) How far is it approximately from Guatemala City, Guatemala to the U.S. border in Arizona?
b) What isn’t known about the migrants who were dropped off on the Mexico-Arizona border and walked across on Thursday?

4. a) How many of last week’s group of 242 people were children?
b) How many of the children were traveling without a legal guardian?
c) Why is it so dangerous to send children alone?

5. What additional problems must Border Patrol address with huge groups of families (men, women and children) illegally crossing into the U.S.? (see para. 13-19, 21, 24)

6. a) By how much has the number of family apprehensions increased in 2019 compared to the same period in 2018?
b) List the populations of Guatemala, Honduras and El Salvador.
c) What is the population of the U.S.? How many people from other countries do you think the U.S. can reasonably absorb per year (from these 3 countries and other countries)? (schools, housing, hospitals, medical care, law enforcement, government assistance…)

7. Even before President Trump said we need to build a wall on the border to prevent people crossing into the U.S. illegally, Democratic Presidents Bill Clinton and Barack Obama said the same. Hatred for Trump prevents many Democratic politicians and many in the media from agreeing with him now.
a) Write the text of Article 4 Section 4 of the Constitution.
b) Who is the president and Congress’ first responsibility to, according to the Constitution?
c) What reasons do Democrats give for opposing a border wall? What reasons do conservatives give for wanting to secure our borders with a wall?