New Strategy Paying Off in Afghanistan 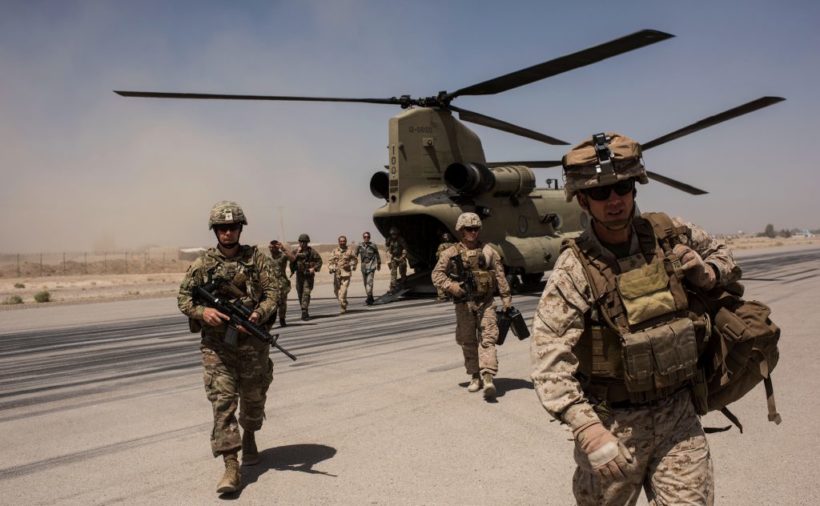 U.S. service members walk off a helicopter on the runway at Camp Bost on Sept. 11, 2017, in Helmand Province, Afghanistan. (Andrew Renneisen/Getty Images)

(by Chris Jasurek, NTD.tv with excerpts from an article by Dan Lamothe, The Washington Post, Nov. 20) – U.S. and Afghan Air Forces struck ten different poppy-processing facilities in Southern Afghanistan on Sunday, Nov. 19, according to the top U.S. general in the region.

The strikes are a result of a plan by President Donald Trump to cut off the Taliban’s drug revenue.

“Our combined operations over the last 24 hours are a demonstration of our will to defeat terrorists and those who support them, especially the narcotics networks,” said Gen. John Nicholson, the commander of U.S. Forces Afghanistan and the NATO-led Resolute Support Mission, (told reporters via satellite from his headquarters in Kabul).

“We hit the labs where they turn poppy into heroin,” Nicholson continued. “We hit their storage facilities where they keep their final product, where they stockpile their money and their command and control.”

According to Gen. Nicholson, the strikes are going to continue. He told reporters from the Pentagon press corps that there are 400–500 such processing plants in Afghanistan. “These operations will continue on in the coming days. We are not going to let up.”

Afghanistan is the world’s largest producer of opium, according to the U.N. Office on Drugs and Crime (UNODC). According to a report by the office, in 2007, Afghanistan produced 93 percent of the non-prescription opiates sold around the world.

Gen. Nicholson said at a Pentagon briefing on Dec. 2, 2016, that the United States believes the drug trade “provides about 60 percent of the Taliban funding.”

According to UNODC, 50 percent of Afghanistan’s opium crop comes from Helmand Province, where the airstrikes were.

The military calls the current strategic initiative “Operation Jagged Knife.” The aim is to cut off the Taliban’s income, much like the way the military struck at the oil fields and other income sources used by ISIS in Iraq and Syria.

Gen. Nicholson made similar remarks. Past policy focused on combat strikes used only when there was a direct threat to U.S. or allied forces. President Trump’s new policy gives the military the freedom to act more strategically, by cutting off the cash the Taliban needs to continue its terrorism.

“The new authorities [the Trump administration] allow me to go after the revenue streams of the enemy,” Nicholson said, according to CNN.

Nicholson emphasized that the military would strike only drug processing facilities, not the opium fields, where Afghan citizens are often forced to farm poppies for the Taliban. “We are not going after the farmers that are growing the poppy,” he said. [Rather, it will target Taliban drug processing hubs, with the hope that if the Afghan government can expand the area it controls, it can encourage the growth of other legal crops.] …

Asked why the strikes were not carried out until now, nearly three months after President Trump approved his new strategy, Nicholson said the operation required extensive preparation and observation by surveillance aircraft. The Drug Enforcement Administration (DEA) estimates there are 400 to 500 opium laboratories across Afghanistan, he said, and about 10 of them have been bombed so far.

Hundreds of intelligence analysts have been involved, along with hundreds of hours of aerial surveillance, he added. He indicated that the tempo of airstrikes in coming days will be roughly the same.

The strikes are not expected to have a a significant effect on the supply of U.S. heroin or other illegal opium-based products, the majority of which comes Mexico. Nicholson said that about 4 percent of heroin in the United States comes from Afghanistan.

From NTD.tv, Nov. 20, 2017. (With excerpts from an article by Dan Lamothe, The Washington Post). Reprinted here for educational purposes only. May not be reproduced on other websites without permission from NTD.tv.

2. What is the aim of the strikes? Be specific.

3. How will the U.S. and Afghan forces achieve their aim?

4. a) What percentage of the Taliban’s funding comes from the drug trade?
b) Why hasn’t the U.S. targeted the Taliban’s main source of funding until now?

5. a) Why isn’t the military targeting the opium fields?
b) The Washington Post wanted to know why it took three whole months to begin the operation. How did Gen. Nicholson answer the query as to why the airstrikes did not begin immediately? Be specific.

6. Commentator John P. Walters writes in Foreign Policy magazine, “By tolerating the opium market, the U.S. and Afghanistan made it impossible to achieve American interests and impossible for Afghans to build something other than a state in the grip of narcoterrorists.”

(After President Obama began the withdrawal of U.S. troops in 2012), “our forces fell to only 8,000 in 2015, the stage was set for runaway opium production. By November of 2016, the government reportedly controlled only 57 percent of Afghanistan. On Aug. 21, President Donald Trump announced that U.S. policy in Afghanistan will now serve American interests without pre-established time or troop limits. ‘Conditions on the ground — not arbitrary timetables — will guide our strategy from now on…. We will fight to win,’ he said. However, he also noted: ‘Military power alone will not bring peace to Afghanistan or stop the terrorist threat arising in that country. But strategically applied force aims to create the conditions for a political process to achieve a lasting peace.’”

Not only does the opium trade fund the Taliban, it also harms people around the world (producing 93 percent of the non-prescription opiates sold around the world – although the U.S. gets most of its heroin from Mexico).

What do you think about President Trump’s new strategy for fighting the Taliban?

Air Force B-52 Stratofortress bombers have delivered a record-setting load of ordnance on Taliban opium factories in Afghanistan, an Air Force general announced on Dec. 12, 2017.

Air Force Brig. Gen. Lance Bunch held a video teleconference from Kabul, Afghanistan, on Dec. 12 in which he discussed the success the United States has had with its new Afghanistan strategy, which includes attacking the Taliban’s drug labs:

New Strategy for an Old War

After 16 years of stalemate, President Trump announced a new direction in Afghanistan on Aug. 21.

The military’s new Afghanistan strategy is more active than reactive and focuses on cutting off the Taliban from funds.

“Using air power, we have been able to target the Taliban in their so-called safe zones, command and control nodes, illicit revenue-generating ventures, and their logistical networks,” Bunch explained.

Bunch explained that the Taliban’s annual budget was “between $300 million and $500 million a year.” Two hundred million of that comes from the drug trade, and the vast majority of the drug labs are in northern Helmand Province, he said.

“We targeted there to disrupt their revenue, to prevent their ability to reset or refit over the winter,” he stated.

“We will continue to target them and disrupt them wherever we find them,” he said.

Another emphasis is on arming and enabling the Afghan army and air force to take on more of the combat.

“Our number one priority here is to continue to build the capacity of the Afghan defense forces,” Bunch told a reporter.

“With the air interdiction campaign, we are able to go after the Taliban’s support structure, whereas before we could only strike essentially in defense of the ANDSF (Afghan National Defense and Security Forces ) forces that were in contact with the enemy,” Bunch continued.

“Now we’re able to go after their weapons cache sites, their revenue generation, their C2 nodes. All the areas where they thought they were safe and they are no longer so. That is our new strategy going forward and it’s definitely been a game-changer and the Taliban is definitely feeling it,” he said.