New Starship is designed to fly to the Moon and Mars 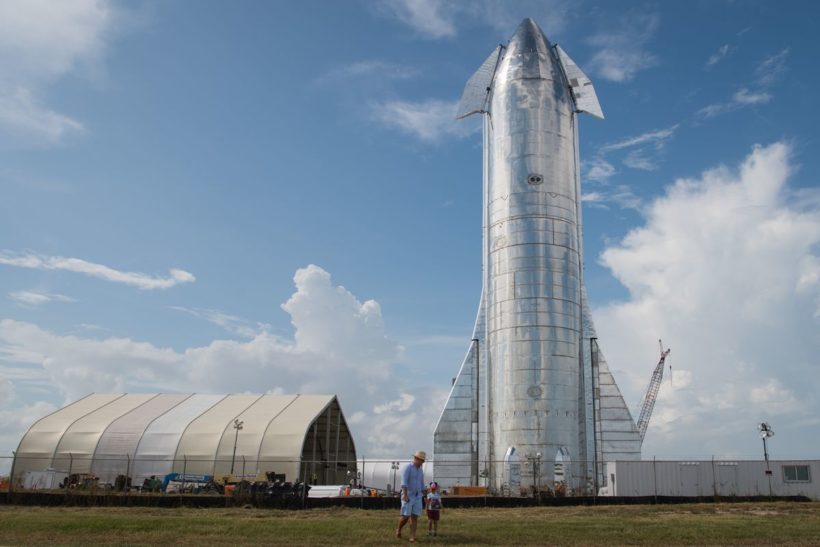 A prototype of SpaceX's Starship spacecraft is seen before SpaceX's Elon Musk gives an update on the company's Mars rocket Starship in Boca Chica, Texas, September 28, 2019.

Musk spoke in front of a 50-meter, 200-ton Starship prototype, calling it “the most inspiring thing that I’ve ever seen.”

He described unique design features of the vehicle and outlined plans to fast-track production of a Starship fleet. His hope, Musk said, is “to reach orbit in less than six months.”

Since its founding in 2002, SpaceX has been working toward the goal of making space travel cheaper and accessible to would-be space travelers.

The Starship is the company’s next foray: a large vehicle that could theoretically carry people into space, land safely back on Earth and be fit to turn around and fly again. Being able to return to space multiple times with “a rapidly reusable orbital rocket,” Musk explained, is key to the company’s plans.

“The critical breakthrough that’s needed for us to become a space-faring civilization is to make space travel like air travel. With air travel, when you fly a plane, you fly it many times,” he said.

Musk noted that Sept. 28 is the 11th anniversary of the commercial space travel giant’s first big victory, when it reached orbit for the first time with one of its rockets, the Falcon 1. The company hit another milestone in March 2017 when it successfully relaunched its Falcon 9 rocket, after that small rocket had previously launched and relanded in 2016.

The goal now, Musk said, is to get the larger Starship, a vehicle that could carry people, to achieve the same feat.

Musk said the company is aggressively working to build the next iterations of the Starship prototype over the next five to six months.

“The rate at which we will be building ships is going to be quite, quite crazy by space standards,” he said.

To do this, he said, the company is ramping up production of the rocket’s engines to reach a production target of building one new engine a day by early next year. If all goes to plan, he said, “we could potentially see people flying next year.”

Musk made a point of thanking one of his investors, Japanese billionaire Yusaku Maezawa, who announced last year that he’d booked a trip as a private passenger with SpaceX for a voyage to the moon.

The reaction from NASA to Saturday’s announcement was to bring attention to another less dramatic goal of SpaceX. The company has a partnership with NASA on the Commercial Crew Program, an enterprise intended to develop safe and affordable transportation of astronauts to and from the International Space Station. NASA Administrator Jim Bridenstine tweeted Friday, in advance of the Starship announcement, that he’d like to see “the same level of enthusiasm focused on the investments of the American taxpayer,” noting that the Commercial Crew Program is years behind schedule.

Musk’s Saturday speech was indeed filled with enthusiasm about space travel. He alluded to his ultimate goal of creating “a self-sustaining city on Mars.” He said that while many problems on Earth need solving, “we also need things that make us excited to be alive and fired up about the future.”

“Becoming a space-faring civilization, being out there among the stars, is one of the things that makes me glad to be alive,” Musk said.

Published at NPR .com on September 29, 2019. Reprinted here for educational purposes only. May not be reproduced on other websites without permission from National Public Radio.

1. What is the Starship prototype? (What does SpaceX aim to do with it?)

2. What goal has SpaceX been working toward since its founding 17 years ago?

3. What was SpaceX’s first accomplishment 11 years ago?

4. What has been the goal for the Starship following the Falco 9 rocket’s success in launching and re-landing in 2016?

5. SpaceX is going to increase production in order to reach a target of building one new engine a day by early 2020. What is Elon Musk’s ultimate goal for space travel?

6. Watch the videos under “Resources” below.
a) What is your reaction to Elon Musk’s introduction of the prototype of the Starship? (surprise, enthusiasm, skepticism, apathy…) Explain your answer.
b) Do you think he will succeed in his short term and long term goals for space travel? Explain your answer.

Musk said that SpaceX is spending only 5 percent of its overall resources on Starship. “Our resources are overwhelmingly on Falcon and Dragon,” he said.

On Saturday, Musk described the use of stainless steel as the skin of the vehicle. “Stainless steel is by far the best design decision we have made,” he said.

Although steel is heavier than carbon composite or aluminum-based materials used in most spacecraft,i t has exceptional thermal properties. Stainless steel 301 does not turn brittle at extremely cold temperatures and it does not melt until reaching 1500 degrees Centigrade. Because of this, Starship requires only a modest heat shield of glass-like thermal tiles.

“Steel is easy to weld, and weather resistant,” Musk told the reporters. “The evidence being that we welded this outdoors, without a factory. Honestly, I’m in love with steel.”

They key in cost-saving is being able to reuse the spacecraft and rockets.

“In almost any motor transport — whether it’s a plane or car, a horse, or bicycle — it’s reusable,” Musk told CNN on Saturday in an interview. “If you could use a car only once, very few people could afford to drive a car. So the critical breakthrough that’s necessary is a rapidly reusable orbital rocket.

“That is the Holy Grail of space.”