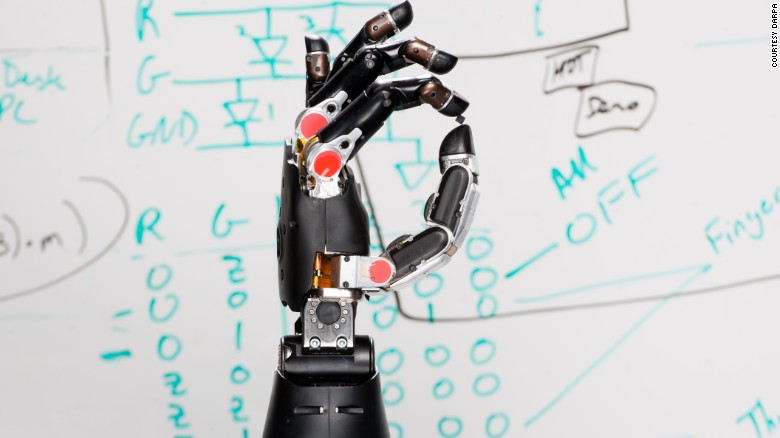 (by Michelle Starr, CNET) — Mind-controlled robotic prosthetics are marvellous inventions, restoring mobility and independence to amputees. But they do have their limitations. One of these is the sense of touch. Without touch, it’s hard to gauge temperature, pain and pressure; the latter of which helps us from crushing soft or delicate objects, such as eggs and fruit.

The USA’s Defense Advanced Research Projects Agency (DARPA) has helped fill this gap, designing a prosthetic hand that has allowed a 28-year-old man to feel physical sensations. As the result of a spinal cord injury, the man has been paralyzed for over a decade, but while wearing the prosthetic hand he was able not just to “feel” when the hand was being touched, but which finger.

The hand operates by being wired directly into the brain’s motor cortex region. This allows electrical signals from the brain to be translated into movement by the hand. To develop a sense of touch in the hand, this concept was extrapolated further — electrode arrays, typically used to measure voltage and current, were implanted into the patient’s sensory cortex, the part of the brain responsible for identifying touch sensations.

“Prosthetic limbs that can be controlled by thoughts are showing great promise, but without feedback from signals travelling back to the brain, it can be difficult to achieve the level of control needed to perform precise movements. By wiring a sense of touch from a mechanical hand directly into the brain, this work shows the potential for seamless bio-technological restoration of near-natural function.”

The electrode arrays in the patient’s motor and sensory cortices were connected to a mechanical hand developed by researchers at Johns Hopkins University’s Applied Physics Laboratory, fitted with torque sensors that can detect pressure on the fingers. These pressure inputs are then converted into electrical signals and transmitted to the electrode array on the patient’s sensory cortex.

The array is similar to a system revealed in 2013, developed jointly by researchers at Cleveland Veterans Affairs Medical Center and Case Western Reserve University and led by Dustin Tyler. Tyler’s hand was able to feel physical sensation through an electrode array that was placed around nerve bundles in the patient’s arm….

The DARPA system was tested a little differently. The patient was blindfolded, and researchers gently touched the fingers of the prosthetic hand, one at a time. He was able to report with nearly 100 percent accuracy which finger was being touched, describing the feeling like being touched on a real hand.

“At one point, instead of pressing one finger, the team decided to press two without telling him,” Sanchez said. “He responded in jest asking whether somebody was trying to play a trick on him. That is when we knew that the feelings he was perceiving through the robotic hand were near-natural.”

The research was presented last week at DARPA’s Wait, What? A Future Technology Forum, held in St Louis.  [The research came out of DARPA’s Revolutionizing Prosthetics project — an interdisciplinary initiative founded in 2006 with the goal of creating a new generation of prosthetics that would give users near-natural dexterity and sensation.] [More than 1,600 US service members have undergone major limb amputations due to battle injuries in America’s post-9/11 military operations. In the future, they and millions of amputees around the world could benefit from technology that would allow them to feel sensations through prosthetics wired to their brains.]

Reprinted here for educational purposes only. May not be reproduced on other websites without permission from C-NET. Visit the website at cnet .com.

1. a) What do robotic prosthetics currently allow amputees to do?
b) What are their limitations?

3. Read the “Background” below the questions. How does this new prosthetic hand work?

4. How does feedback from the brain help with the control of prosthetic limbs?

5. What potential does this new technology have, according to DARPA program manager Justin Sanchez?

6. How does this article inspire you?

A prosthetic hand that is connected directly to the brain successfully enabled a paralyzed man to “feel” again, according to researchers at the Defense Advanced Research Projects Agency (DARPA).

The 28-year-old male, who suffered a spinal cord injury and has been paralyzed for more than a decade, was able to control a robotic hand with his brain and reported being able to sense physical sensations.

DARPA researchers attached electrodes to the man’s sensory cortex — the area of the brain responsible for identifying tactile sensations, such as pressure. Electrodes were also placed on the patient’s motor cortex, the part of the brain that directs body movements.

Wires were run directly from the electrodes to the mechanical hand, which was developed by the Johns Hopkins University Applied Physics Laboratory (APL) in Laurel, Maryland. Using this connection, the man could control the robotic hand’s movements using the same types of thoughts, or neural connections, that the brain uses to move a hand normally. In addition, because the prosthetic hand was connected to the sensory cortex, the patient could sense when the hand was being touched, even when he was blindfolded.

The research is part of DARPA’s Revolutionizing Prosthetics program, which aims to develop a prosthetic that can not only be controlled by sending signals for the brain, but can also sense precisely what those devices are touching.