(by Conor Dougherty, The Wall Street Journal, WSJ.com) HUGO, Minn. – In this suburb of St. Paul, the new library branch has no librarians, no card catalog and no comfortable chairs in which to curl up and read. 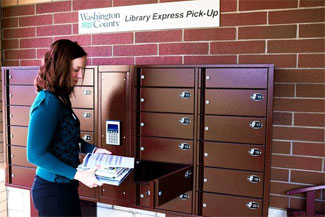 Instead, the Library Express is a stack of metal lockers outside city hall. When patrons want a book or DVD, they order it online and pick it up from a digitally locked, glove-compartment- sized cubby a few days later. It’s a library as conceived by the Amazon.com generation.  [PHOTO AT RIGHT: A library worker shows how to check out books from a digitally locked cubby, in Hugo, Minn.]

Faced with layoffs and budget cuts, or simply looking for ways to expand their reach, libraries around the country are replacing traditional, full-service institutions with devices and approaches that may be redefining what it means to have a library.

Later this year Mesa, Ariz., plans to open a new “express” library in a strip-mall, open three days a week, with outdoor kiosks to dispense books and DVDs at all hours of the day. Palm Harbor, Fla., meanwhile, has offset the impact of reduced hours by installing glass-front vending machines that dispense DVDs and popular books.

The wave of innovation is aided by companies that have created new machines designed to help libraries save on labor. For instance, Evanced Solutions, an Indianapolis company that makes library software, this month is starting test trials of a new vending machine it plans to start selling early next year.

“It’s real, and the book lockers are great,” said Audra Caplan, president of the Public Library Association. “Many of us are having to reduce hours as government budgets get cut, and this enables people to get to us after hours.”

Some library directors worry that such machines are the first step toward a future in which the physical library-along with its reference staffs and children’s programs-fades from existence. James Lund, director of the Red Wing Public Library in Red Wing, Minn., recently wrote skeptically about the “vending library” in Library Journal, a trade publication.

Public libraries are an American creation. The first was introduced by Benjamin Franklin, who created a co-operative library funded by people who used it. The first tax-supported library was founded in Peterborough, N.H., in 1833, according to Larry Nix, a retired librarian and library historian. Today there are about 16,700 public library buildings in the country.

Robo-libraries are still a relatively rare sight. Public Information Kiosk Inc., a company in Germantown, Md. that sells kiosks and vending machines to libraries, has had 25 orders for a book-and-DVD-dispensing machine that the company introduced last year. Fred Goodman, the company’s chief executive, estimated that, overall, there are no more than a few dozen vending machines now in operation. Still, he expects to sell at least twice as many units in 2011.

Hugo is a town of 13,700 people on the northern fringes of the Minneapolis-St. Paul metropolitan area that has seen its population double in the last decade. But surrounding Washington County is struggling to build the infrastructure to support the newcomers: Over the past year, the county’s nine-branch library system has cut the equivalent of two full-time workers to trim costs.

The combination of greater demand and leaner resources is visible in the wait list for some popular books. The system has 32 copies of “Freedom,” the new Jonathan Franzen novel set in nearby St. Paul, but 321 people on the waiting list-a 10 to 1 ratio. In flusher times, the wait-list ratio was usually closer to 5 to 1 for popular titles.

The 20 lockers of Library Express won’t solve that problem, but they have made the library more convenient. The county is adding 20 more lockers next month.

Melody Baker, 47, recently used the lockers to check out the best seller “Eat, Pray, Love,”-“I had to see what the fuss was about,” she said.

1. For what reasons are libraries around the country replacing traditional, full-service libraries with other approaches for providing books, etc. to residents?

2. Describe some of the alternatives to full service libraries that are being implemented around the country.

3. How have budget cuts in libraries led to the startup of a new industry? (How have entrepreneurs seen a need and created a solution? How are jobs and income being created as library jobs are being cut?)

4. How does the president of the Public Library Association view the library cuts and alternative methods for dispensing materials?

7. Ask a parent, and a grandparent the same questions (from #6).

8. Do you think libraries will ever become obsolete? Explain your answer.  (If so, would this be bad, or just part of our changing world?)

LEID Products makes the book lockers used by some libraries.  Visit the website at leidproducts.com.