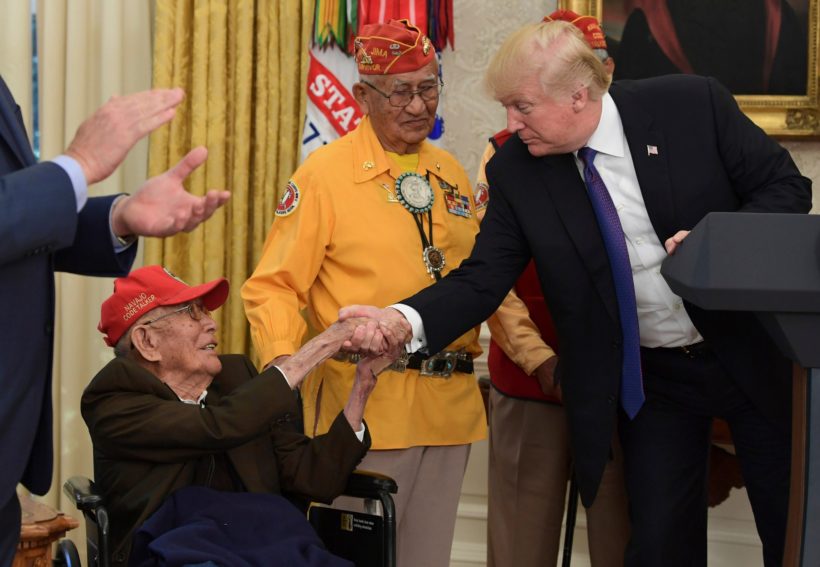 Fleming Begaye Sr., left, a code talker in World War II, was honored by President Trump at a White House ceremony in November 2017

“The Navajo Nation has lost another brave and selfless Diné warrior, who sacrificed more than we’ll ever know to defend our country,” Nez wrote in the statement. “We offer our heartfelt appreciation to the family for sharing his life with us. May the Creator bless you and your family with strength and comfort.”

Begaye died in Chinle, Apache County, Arizona.  He became interested in joining the Marine Corps when someone from the military spoke to him and other Navajo men at their high school in Fort Wingate near Gallup, New Mexico. Begaye told his granddaughter how he dropped out of high school to enlist, where he and other Code Talkers attended classes to develop a code that referred to ships as various kinds of animals in the Navajo tongue over the radio and telephone.

The Japanese were never able to break it.

Begaye served in the Marines from 1943 to 1945.  He was one of three Code Talkers honored at the White House in 2017 for their service in World War II.

Former Navajo Code Talker Peter MacDonald was with Begaye at the White House and recalled Begaye surviving the Battle of Tarawa, swimming to the beach after his landing craft was destroyed.

He also spoke of how Begaye was badly shot in another battle and had to be hospitalized at a naval hospital for a year.

After returning to the United States, Mr. Begaye owned and operated a trading post in Chinle, where he lived with his wife, Helen M. Begaye, and three children. He later added a car repair shop, a cafe and a small grocery store and then went into farming, growing apple, cherry and plum trees and raising cattle and sheep.

The Navajo Code Talkers were successful because they provided a fast, secure and error-free line of communication by telephone and radio during World War II in the Pacific. The 29 initial recruits developed an unbreakable code, and they were successfully trained to transmit the code under intense conditions.

Half of the 29 were shipped overseas to join the first division of the U.S. Marines because they were prepping their first offensive move in the Pacific arena, which was on Guadalcanal.

Once the Navajo Code Talkers proved to be successful in the field, more were recruited. It is estimated that more than 400 Navajo men served as Code Talkers during World War II. This graphic shows the Navajo code names used for ships during World War II by the Navajo Code Talkers. (Photo: The Republic)

2. How many Navajo Code Talkers were there during WWII?

3. How did the Code Talkers use the Navajo language during WWII?

6. Read the “Background” and check out some of the links. Then watch the videos under “Resources.” How do you think Americans can/should honor these brave men today?

How were the Code Talkers honored?