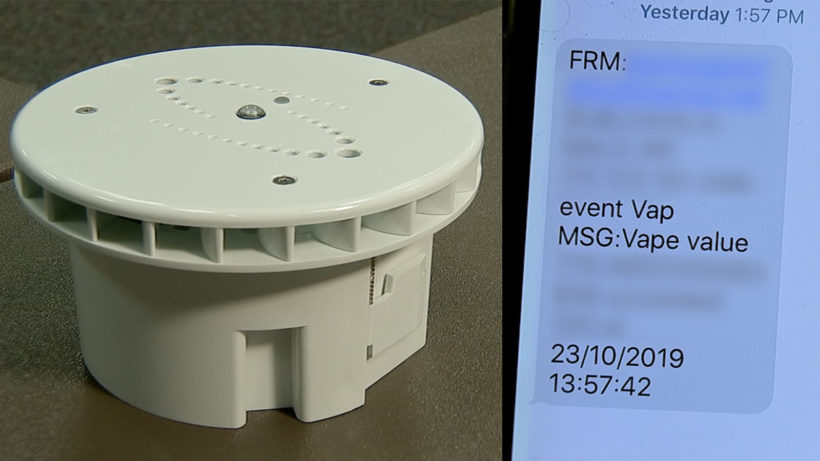 (by Brianna Kudisch, NJ Advance Media for NJ.com) – In the latest effort to stop students from [vaping] between classes, some New Jersey high schools are turning to a new form of security to act as a deterrent: vaping detectors.

South Plainfield High School installed “several” detectors in the bathrooms and other locations on Friday, Jan. 24, according to interim principal Robert Diehl. He declined to say exactly how many detectors are being installed or the specific locations, but said the bathrooms are a priority.

“What we’re doing is we’re trying to create a comfortable environment and a safe environment for all students,” Diehl told NJ Advance Media. “This maximizes our efforts to keep our students healthy and safe.”

The HALO vape sensors are highly sensitive and pick up different elements in the air, including humidity, temperature, and several chemicals, Diehl said. He said they wanted to keep the specifics of the detectors confidential, but essentially, they pick up chemicals in the air and send notifications to multiple administrators.

The detectors—which cost $1,000 each and were bought from A+ Technology & Security Solutions—are also tamper-resistant, according to Diehl. If someone attempts to tamper with them, a sound alert goes off and a notification goes out.

“They’re hard to tamper with,” he said. “If you touch them, there’s an alert that goes out immediately and the location is specific.”

The money for the detectors came from the district’s security budget, he said.

Both Diehl and Noreen Lishak, the district’s superintendent, emphasized South Plainfield doesn’t have a specific problem, but is looking at solutions for the general problem of vaping.

“Although only a handful of students have received consequences for vaping in school, we believe even a few is too many,” Lishak wrote in an email to NJ Advance Media. “Our intention is for the vape detectors to serve as a deterrent so that we can continue to foster good health and wellness in our student body.”

Other districts are doing the same. Sparta High School installed detectors earlier this year in two of its bathrooms, and plans to add more, principal Ronnie Spring said.

Spring echoed Lishak’s view that the detectors are meant as deterrents, and he said they’ve been “extremely effective” in reducing the amount of vaping in bathrooms.

Glen Rock High School is also planning to install the detectors later this spring, but more as a pilot program, with the option to add more detectors if proved effective. The district plans to buy the FlySense detectors from Soter Technologies, the other major company that sells vaping detectors, principal John Arlotta said.

The school district in Cranford started installing the detectors in the high school the first week of January and anticipates finishing installation by late February, Superintendent Scott Rubin said.

“The hope is that if they’re successful in stopping /deterring vaping,” Rubin wrote in an email. “The Cranford Board of Education will look to budget for additional detectors throughout the District.”

Published at NJ .com by NJ Advance Media. Reprinted here for educational purposes only. May not be reproduced on other websites without permission from NJ .com.

2. What is the purpose of the detectors?

3. How do the detectors work?

4. How do school officials say they can prevent students from tampering with the detectors?

5. How effective are the detectors, according to Sparta High School principal Ronnie Spring?

6. Some schools say they’re a useful deterrent. Others said not so much: Consider the following:

From the NJ article above: “Kevin Schroth, an associate professor in health behavior at Rutgers University…questioned the use of vaping detectors. He said that even if they are effective, students can recognize them and decide to vape in places that lack the detectors.

From a Wired report: “By the time we get there the kids are gone,” says Kimm Dever, an administrator at Hinsdale Central High School near Chicago. Dever says the devices also went off randomly, and administrators couldn’t tell which kids were vaping and which just happened to be in the bathroom when the devices alerted.

Also from Wired: Revere Schools in Bath, Ohio, reported similar problems. Administrators rarely made it to the bathroom in time to catch the vapers. In theory, school officials could consult footage from hallway cameras to triangulate which students were in the bathroom when the detectors went off. “That also takes up time, and we don’t always have that type of time” Reece says.

a) How could/should administrators solve these problems? Explain your answer.
b) How important is it for schools to prevent students from vaping in school (and ultimately to educate students about the dangers associated with vaping)?

7. Some students are concerned that it is an invasion of their privacy. Administrators point out there are not cameras or audio feed – the detectors just sense elements in the air.
Other students have said they don’t like using restrooms which are used as vaping rooms.
What do you think?

Watch an Aug. 22 report from a school district near Boston:

Watch a Sept. 6 report from Revere Schools in Ohio: