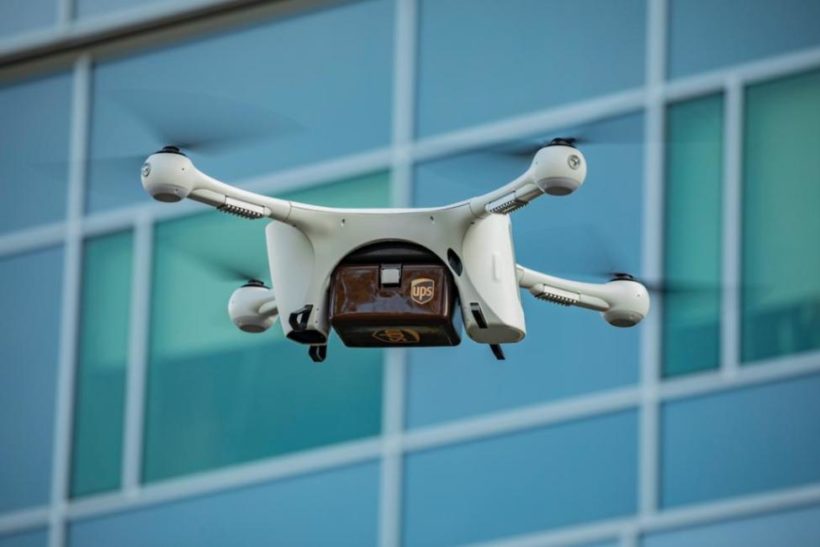 (by Daniel Uria, UPI) — The first-ever medical drone delivery program to be approved by the Federal Aviation Administration (FAA) has taken flight at a North Carolina hospital in a pioneering use of the devices in the healthcare field.

A small, white drone last month began delivering samples, including blood, between Raleigh’s WakeMed Hospital surgical center and the primary testing lab at its main campus. In the following weeks, the supplies made daily flights that professionals hope will eventually transport life-saving products like blood to more rural locations.

The flights are conducted through a collaboration with United Parcel Service (UPS) and California-based drone manufacturer Matternet and is overseen by the North Carolina Department of Transportation (NCDOT) and the FAA’s Unmanned Aircraft System Integration Pilot Program. …

The three-year pilot program seeks to safely test the integration of drones into commercial airspace. …

The flights use Matternet’s M2 quadcopter drone, which can carry medical payloads of up to about 5 pounds for more than 12 miles. Each flight begins with a medical professional loading a secure drone container with a medical sample or specimen. In about 3 minutes, it flies a path to and from a landing pad at WakeMed’s main hospital. …

Collaborators eventually want to take advantage of the drone’s full range and ship samples to campuses around Wake County.

Dr. Stuart Ginn, a WakeMed ENT surgeon and director of innovations for the hospital, said his team first considered implementing drone technology after realizing the existing process for transporting blood samples was inefficient. He said lab samples accounted for 70 percent of what the hospital was shipping through couriers.

“That’s a fine solution in some cases, but we’ve kind of been thinking about how theoretically, if drone technology is deployable, it could change the way we move things around in our system,” he said.

“The beauty about the drone network is it really cleans up that intracity congestion,” he said. “It really ends up being a very efficient solution.”

The pilot program is the first of its kind in the United States, but UPS and Matternet have launched similar programs overseas — including thousands of delivery flights in Rwanda and Switzerland.

“Rwanda was a more rural application, and so while we did have some experience before this project came about, what we didn’t have is a good, solid urban solution … for the United States,” Gagnon said.

James Pearce, communications officer at NCDOT said the department is examining what obstacles medical drone deliveries may pose and how to overcome them.

“We’re figuring out things, like the safety of the drone as it flies over people,” he said. “As well as how does a blood sample do when it’s being flown by a drone at 200-300 feet?”

The FAA said it has looked at some of those potential obstacles. In an emailed statement, the agency said it granted the required waiver after reviewing safety practices at the transportation department, Matternet and WakeMed. …

If the pilot program is successful and the FAA grants more drone freedom, the collaborators plan to use the devices for more tasks. The next planned step is food delivery in Holly Springs, N.C., and then medical deliveries to rural hospitals.

“We’ve got these systems of hospitals that are hundreds of miles apart, and it can take hours to get supplies and equipment from place to place,” Pearce said.

Published at UPI .com on April 24. Reprinted here for educational purposes only. May not be reproduced on other websites without permission from United Press International.

1. Define the following as used in the article:
-pioneering
-oversee/oversight
-pilot program

3. a) What do those involved in the program hope to accomplish through it?
b) What is the goal for UPS, Matternet and the FAA for the three-year pilot program?

4. a) Who is running the pilot program?
b) What two government agencies are overseeing the program?

5. What capability does the M2 quadcopter drone have?

6. How does Dan Gangon of UPS explain the benefits of drone deliveries?

7. What aspects of medical drone deliveries is the NC DOT studying?

8. From paragraph 16: “If the pilot program is successful and the FAA grants more drone freedom, the collaborators plan to use the devices for more tasks. The next planned step is food delivery in Holly Springs, N.C., and then medical deliveries to rural hospitals.”
Do you think there could be a point where there were too many drones in operation across the U.S.? (medical deliveries; food deliveries (Walmart, other grocery stores, restaurants, Amazon deliveries…) Explain your answer.