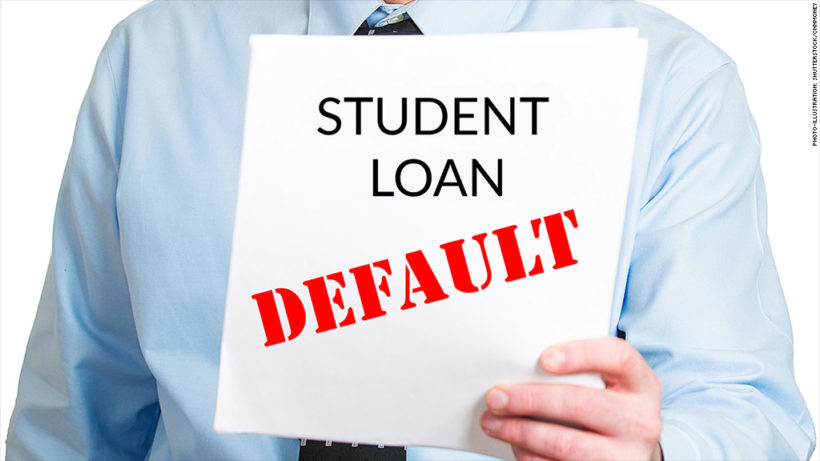 (by Tom Anderson, CNBC) – On average, more than 3,000 borrowers default on their federal student loans every day.

The number of people who have defaulted on their federal student loans increased 17 percent from 2015 to 2016, according to a Consumer Federation of America analysis of U.S. Department of Education data.

Last year, 42.4 million Americans owed $1.3 trillion in federal student loans. More than 4.2 million borrowers were in default as of the end of 2016, up from 3.6 million in 2015. In all, 1.1 million more borrowers went into or re-entered default last year.

People who have defaulted on their student loans “are going to have a tougher time passing an employment verification check, saving for retirement or ever buying a home,” Chopra said. Borrowers in default can also have their wages garnished and their tax refunds seized. …

You can avoid defaulting by borrowing an appropriate amount for you or your children’s college education. Mark Kantrowitz, vice president of strategy for college and scholarship search site Cappex .com recommends that students generally take out no more debt than their expected first year’s salary out of college.

One drawback to income-based repayment plans is that you have to re-apply every year to qualify for lower payments. To make matters worse, the IRS data retrieval tool that helps borrowers apply for these repayment plans will be down for several weeks, the agency said.

Lawmakers from both parties have supported a bill that would require federal student loan borrowers in distress to be automatically enrolled in income-based repayment plans and to make it easier for people to stay enrolled in those plans, said Pauline Abernathy, executive vice president of the Institute for College Access & Success.

People with private student loans face limited options. Some private lenders offer forbearance if borrowers can’t make their payments. Those benefits aren’t as robust as those with federal loans and typically last no more than 12 months. And unlike most other debt, you usually can’t get rid of student loans through bankruptcy.

First published at CNBC on March 8, 2017. Reprinted here for educational purposes only. May not be reproduced on other websites without permission from CNBC. For the original article, visit CNBC .com.

1. Define default as used in the article.

3. What percent/number of Americans with student loans are in default?

4. List the consequences of defaulting on a student loan.

5. What is a good way to avoid defaulting on your student loan, according to Mark Kantrowitz?

6. How do lawmakers propose helping students who are having trouble paying back their student loans?

7. Many people make the incorrect assumption that they do not have to repay their student loans if they declare bankruptcy. Unlike most other debt, you cannot get rid of your student loan debt by declaring bankruptcy. What is the maximum student loan you think you can afford to repay based on your career choice? List several ways a student could avoid graduating college with a huge student loan debt.

CHALLENGE: It is important to make a plan before you start college. The Income-Driven Repayment Plans will help you out should you find yourself in trouble, but not getting into a huge amount of debt is the best plan. Starting out life with a 20 year debt is not the way to go. Ask a few adults you know if they are in a student loan debt and how they view taking out a student loan that is difficult to repay.