Mojave Cross Can Stay on Display in California 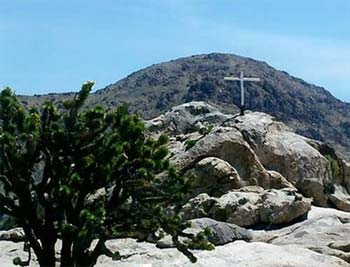 (by Valerie Richardson, WashingtonTimes.com) – An 8-foot cross honoring fallen soldiers in the remote Mojave National Preserve in California can stay where it is, because the Supreme Court said Wednesday that the Constitution nowhere requires the “eradication of all religious symbols in the public realm.”

Justice Anthony M. Kennedy, writing the lead opinion in a 5-4 decision in which several justices wrote separate concurrences and dissents, compared the Mojave Cross to a hypothetical highway memorial marking the death of a state trooper to make the point that such displays “need not be taken as a statement of governmental support for sectarian beliefs.”

“The Constitution does not oblige government to avoid any public acknowledgment of religion’s role in society,” Justice Kennedy said in his opinion. “Rather, it leaves room to accommodate divergent values within a constitutionally permissible framework.”

Leading the dissenters was Justice John Paul Stevens, who called the war memorial “unprecedented” in its starkly religious tone.

“Congressional action, taken after due deliberation, that honors our fallen soldiers merits our highest respect,” said Justice Stevens, who recently announced his plan to retire. “As far as I can tell, however, it is unprecedented in the nation’s history to designate a bare, unadorned cross as the national war memorial for a particular group of veterans.”

The justices didn’t rule technically on the constitutional issue of whether the cross constitutes an establishment of religion. However, they declined to rule that the cross was a First Amendment violation, as asked, and the majority justices’ language indicate a more benign view of religious expression on public lands.

Instead, the justices sent the case, Salazar v. Buono, back to a lower federal court and told the judge to look again at how the constitutional issues are affected by a congressional plan to transfer the federal land beneath the 8-foot cross to a veterans group. Lower federal courts had said the transfer was insufficient, a finding the justices implicitly rebuked.

The American Civil Liberties Union filed the lawsuit on behalf of Frank Buono, a former assistant superintendent at Mojave National Preserve, who said that the memorial offended him [and was a violation of the First Amendment ban on a government “establishment of religion”]. The original cross was erected atop an outcropping known as Sunrise Rock in 1934 by World War I veterans.

A federal court ruled in Mr. Buono’s favor and ordered the removal of the cross, but Rep. Jerry Lewis, California Republican, inserted language into a defense appropriations bill declaring the cross site a national memorial.

Mr. Lewis also arranged to transfer the acre of land surrounding the Mojave Cross to the Barstow Veterans of Foreign Wars, thus placing the cross on private land.

The ACLU argued that the land transfer was a calculated effort to circumvent the court ruling, and the 9th U.S. Circuit Court of Appeals agreed, saying the land transfer “would leave a little donut hole of land with a cross in the midst of a vast federal preserve.”

But the lower court “did not acknowledge the statute’s significance,” Justice Kennedy said in his opinion.

“In belittling the government’s efforts as an attempt to ‘evade’ the injunction, the District Court had things backwards,” said Justice Kennedy. “Congress’s prerogative to balance opposing interests and its institutional competence to do so provide one of the principal reasons for deference to its policy determinations.”

The case was sent back to the lower court.

Peter Eliasberg, managing attorney for the ACLU of Southern California, said the organization would continue to argue that the land transfer failed to address concerns over the separation of church and state.

“Although we’re disappointed by today’s decision, we’re encouraged that the case is not over,” Mr. Eliasberg said. “The cross is unquestionably a sectarian symbol, and it is wrong for the government to make such a deliberate effort to maintain it as a national memorial.”

The Mojave Cross is now encased in a plywood box, hidden from view while litigation is ongoing. The original wooden cross has been replaced several times, and the current version is constructed of white metal.

“Congress has repeatedly voted overwhelmingly to protect the Mojave Cross as a memorial to veterans and those who have died to defend our nation, never intending it to be preserved as a religious symbol,” said Mr. Lewis, whose district includes the desert area where the cross is located.

“I am gratified that the Supreme Court has upheld the right and authority of Congress to seek these solutions in memory of our veterans,” he said.

The decision came as a victory for religious-freedom groups fighting efforts to eliminate religious symbols and references from the public square.

“A passive monument acknowledging our nation’s religious heritage cannot be interpreted as an establishment of religion,” said Joseph Infranco, senior counsel of the Alliance Defense Fund, which filed a friend-of-the-court brief defending the cross. “To make that accusation, one must harbor both a hostility to the nation’s history and a deep misunderstanding of the First Amendment.”

Eric Rassbach, national litigation director of the Becket Fund for Religious Liberty, which also filed a brief in the case, applauded the ruling as “simple common sense.”

“The First Amendment guarantees the right to speak and believe freely; it does not give busybodies the right to cut down religious symbols they don’t like,” Mr. Rassbach said.

At the same time, the ruling leaves unanswered several questions, such as what legal standard should be applied to religious displays on public property, according to the Becket Fund.

The cross supporters had feared that an unfavorable ruling would have jeopardized the nation’s hundreds of cross-bearing roadside memorials, as well as other war memorials.

At least two other cross cases are in federal courts. One concerns a 29-foot cross at a war memorial on Mount Soledad near San Diego and the other the 12-foot roadside crosses that Utah uses to memorialize highway patrol troopers killed in the line of duty.

Copyright 2010 News World Communications, Inc.  Reprinted with permission of the Washington Times.  For educational purposes only.  This reprint does not constitute or imply any endorsement or sponsorship of any product, service, company or organization.  Visit the website at washingtontimes.com.

3. What happened after a California Congressman arranged to sell the acre of land surrounding the Mojave Cross to the VFW, thus placing the cross on private land, after a federal court ruled in Mr. Buono’s favor and ordered the removal of the cross?

4. Joseph Infranco, senior counsel of the Alliance Defense Fund, which filed a friend-of-the-court brief defending the cross said “A passive monument acknowledging our nation’s religious heritage cannot be interpreted as an establishment of religion. To make that accusation, one must harbor both a hostility to the nation’s history and a deep misunderstanding of the First Amendment.” Do you agree with Mr. Infranco? Explain your answer.

5. Justice Anthony Kennedy writing for the majority, said “The goal of avoiding governmental endorsement does not require eradication of all religious symbols in the public realm.” He wrote further that World War I veterans first erected the cross as a memorial to fallen comrades, and more than religion alone, “it evokes thousands of small crosses in foreign fields marking the graves of Americans who fell in battles, battles whose tragedies are compounded if the fallen are forgotten.”

Justice Stevens wrote for the dissent “Congressional action, taken after due deliberation, that honors our fallen soldiers merits our highest respect. As far as I can tell, however, it is unprecedented in the nation’s history to designate a bare, unadorned cross as the national war memorial for a particular group of veterans.”

The Wall Street Journal reports that veterans, some of whom had moved to the region for health reasons, first erected a cross at the site in 1934 and it was often used for Easter services.

Do you think the Supreme Court made the appropriate decision? Explain your answer.

Salazar v. Buono was a legal case argued before the United States Supreme Court regarding the establishment clause of the First Amendment to the United States Constitution. The case concerned the legality of the Mojave cross, a Latin cross which was placed atop a prominent rock outcropping in 1934 to honor war dead. The location is known as “Sunrise Rock” in the Mojave National Preserve in San Bernardino County in southeastern California. (from wikipedia.org)

Watch a video about the cross:

Read the Salazar v. Buono decision at supremecourt.gov/opinions/09pdf/08-472.pdf. (NOTE: This document is in PDF format.)

Read general information about the Supreme Court at bensguide.gpo.gov/9-12/government/national/scourt.html.

Read about the Salazar v. Buono case at pewforum.org/Church-State-Law/In-Brief–Salazar-v-Buono.aspx.