Miracle boy: ‘I smiled because I was alive’

Brave 7-year-old Kiki Joachin spoke to the British paper The Sun from the Israeli field hospital where he and his 10-year-old sister, Sabrina, were taken after their weeklong ordeal trapped under their collapsed six-story apartment building.

Miraculously, they suffered only cuts and bruises — and were reunited with their mother and aunt after being treated for severe dehydration. 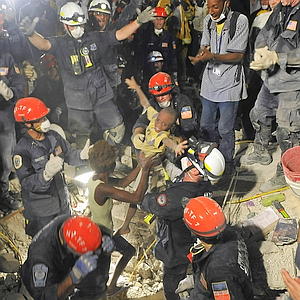 But while Kiki and Sabrina got out alive on Tuesday, three of their siblings — Yeye, 9; Titite, 3; and 18-month-old Didine — didn’t make it.

“I am sad for my brothers and sisters but happy with my mama,” Kiki told the paper.

Kiki’s mother, Odinel, 38, is stunned that they survived.  “When I saw them, I collapsed in tears and hugged them,” she said.  “We were all laughing and crying at the same time.”

She said she had been making supper when the vicious quake began shaking their home on Jan. 12 and bricks and plaster suddenly came raining down on them.

“I was preparing rice and beans for dinner when the whole six-story [apartment building] fell flat in seconds,” she told The Sun.

“We were on the ground floor and when I came to I was lying under a pile of rubble.  I was screaming out for the children as I threw pieces of concrete off me but heard nothing.  I could see layers of concrete lying on the spot where Kiki had been doing homework with his sister.  I was sure they were dead,” she said.

Her sixth child, David, 4, survived because he had been playing outside at the time.

As the days passed, the devastated family gave up hope.  It was only when the children’s aunt, Denival Orana, came back to the ruined house a week later to look for some belongings that optimism emerged.  “I pulled at some of the wreckage when I heard a voice under the concrete below me,” Orana said.  “I heard, ‘Mama! Help us, Mama! Water!’ It was Kiki! Then I heard his sister calling out as well and ran to fetch help.”

She found a crew of New York City cops and firefighters nearby and told them there were survivors.  After hours of digging, they finally punched a hole in the debris that covered the pair.

At first, Kiki recoiled in fear as he looked out at strange faces.  His aunt then coaxed him out by calling his name.

“When he saw my face, he grinned and knew he was safe,” she said.

As rescuers pulled him into the open, The Post’s Matthew McDermott snapped the photo of the little boy’s overjoyed face and outstretched arms.

Kiki and his sister are overjoyed to be reunited with their family, although they can’t be certain about what the future holds.

With their home destroyed, they are currently living in a camp run by an Israeli charity.

Write to Lukas Alpert at lukas.alpert@nypost.com.

1. How long were Kiki Joachin and his sister Sabrina trapped in the rubble of their collapsed apartment building?

2. What types of injuries did the children have after their six-story apartment building collapsed on top of them?

3. Why did it take rescuers so long to look for Kiki and his sister?

4. How did Kiki react when he saw his aunt as he was being pulled out of the rubble?

5. How does this article encourage you?