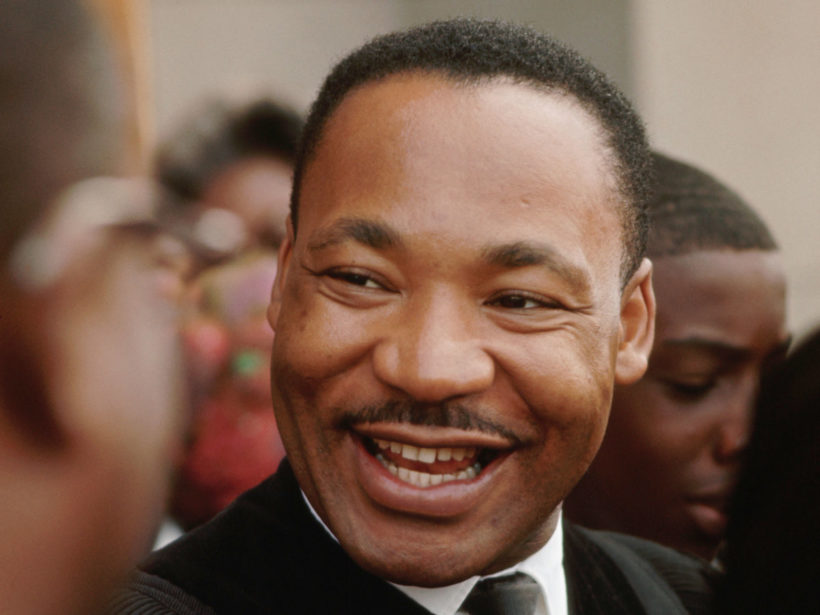 On August 28, 1963 Martin Luther King, Jr. delivered his “I HAVE A DREAM” speech at the Lincoln Memorial, Washington D.C.

I am happy to join with you today in what will go down in history as the greatest demonstration for freedom in the history of our nation.

Five score years ago, a great American, in whose symbolic shadow we stand today, signed the Emancipation Proclamation. This momentous decree came as a great beacon light of hope to millions of Negro slaves, who had been seared in the flames of withering injustice. It came as a joyous daybreak to end the long night of their captivity. 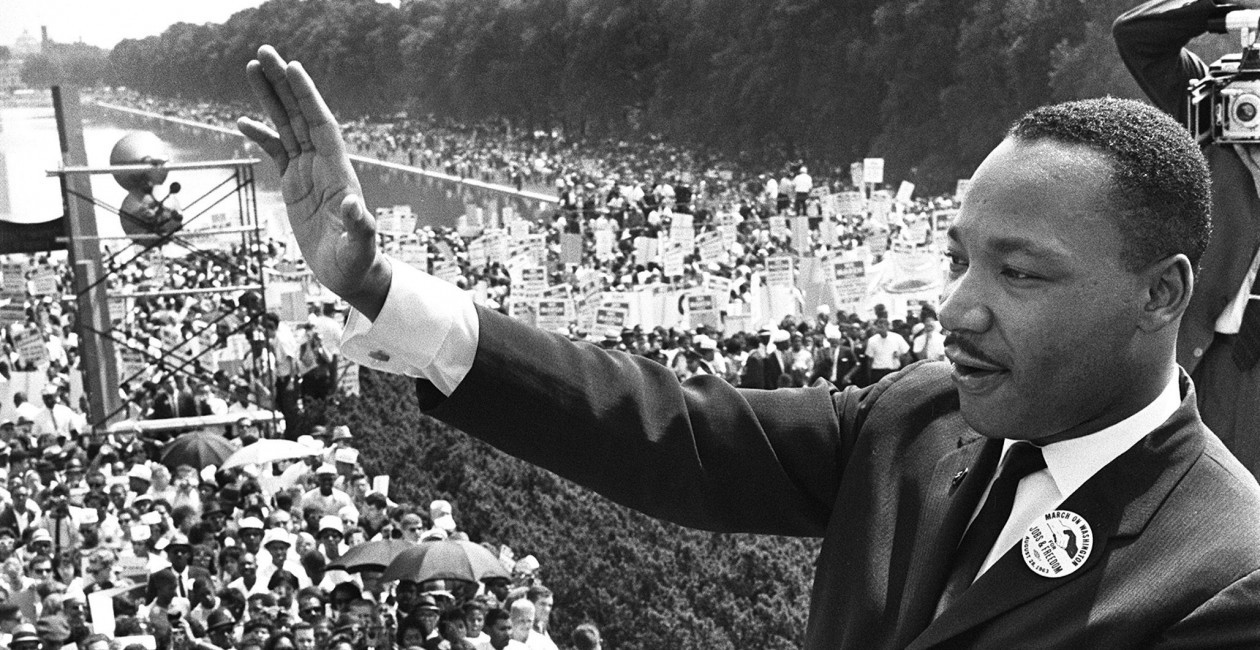 In a sense we have come to our nation’s capital to cash a check. When the architects of our republic wrote the magnificent words of the Constitution and the Declaration of Independence, they were signing a promissory note to which every American was to fall heir. This note was a promise that all men, yes, black men as well as white men, would be guaranteed the unalienable rights of life, liberty, and the pursuit of happiness. It is obvious today that America has defaulted on this promissory note, insofar as her citizens of color are concerned. Instead of honoring this sacred obligation, America has given the Negro people a bad check, a check which has come back marked “insufficient funds.”

It would be fatal for the nation to overlook the urgency of the moment. This sweltering summer of the Negro’s legitimate discontent will not pass until there is an invigorating autumn of freedom and equality. Nineteen sixty-three is not an end but a beginning. Those who hope that the Negro needed to blow off steam and will now be content will have a rude awakening if the nation returns to business as usual. There will be neither rest nor tranquility in America until the Negro is granted his citizenship rights. The whirlwinds of revolt will continue to shake the foundations of our nation until the bright day of justice emerges.

But there is something that I must say to my people who stand on the warm threshold which leads into the palace of justice. In the process of gaining our rightful place we must not be guilty of wrongful deeds. Let us not seek to satisfy our thirst for freedom by drinking from the cup of bitterness and hatred. We must ever conduct our struggle on the high plane of dignity and discipline. We must not allow our creative protest to degenerate into physical violence. Again and again we must rise to the majestic heights of meeting physical force with soul force. The marvelous new militancy which has engulfed the Negro community must not lead us to a distrust of all white people, for many of our white brothers, as evidenced by their presence here today, have come to realize that their destiny is tied up with our destiny. And they have come to realize that their freedom is inextricably bound to our freedom. We cannot walk alone.

I am not unmindful that some of you have come here out of great trials and tribulations. Some of you have come fresh from narrow jail cells. Some of you have come from areas where your quest for freedom left you battered by the storms of persecutions and staggered by the winds of police brutality. You have been the veterans of creative suffering. Continue to work with the faith that unearned suffering is redemptive. Go back to Mississippi, go back to Alabama, go back to South Carolina, go back to Georgia, go back to Louisiana, go back to the slums and ghettos of our northern cities, knowing that somehow this situation can and will be changed. Let us not wallow in the valley of despair, I say to you today, my friends. And so even though we face the difficulties of today and tomorrow, I still have a dream. It is a dream deeply rooted in the American dream.

I have a dream that one day this nation will rise up and live out the true meaning of its creed: We hold these truths to be self-evident that all men are created equal.

I have a dream that my four little children will one day live in a nation where they will not be judged by the color of their skin but by the content of their character. I have a dream today!

And so let freedom ring – from the prodigious hilltops of New Hampshire.

Let freedom ring – from the mighty mountains of New York.

Let freedom ring – from the heightening Alleghenies of Pennsylvania.

Let freedom ring – from the snow-capped Rockies of Colorado.

Let freedom ring – from the curvaceous slopes of California.

But not only that.

And when this happens, when we allow freedom to ring, when we let it ring from every village and every hamlet, from every state and every city, we will be able to speed up that day when all of God’s children, black men and white men, Jews and Gentiles, Protestants and Catholics, will be able to join hands and sing in the words of the old Negro spiritual,

Thank God Almighty, we are free at last.”

PLEASE NOTE: For holiday postings including MLK Jr. Day, we do not provide “Answers by Email,” as the questions typically vary by a student’s own experience or are opinion questions.

DIRECTIONS: Read Dr. Martin Luther King, Jr.’s “I Have a Dream” speech above. (Listen to the speech under “Resources” below.) Then answer the following questions:

2. You have probably read all or parts of Dr. King’s speech before. His ideas continue to inspire. What inspires you most about this speech? Explain your answer.

3. In his speech about the need for equality, Dr. King made the following appeal:

“But there is something that I must say to my people who stand on the warm threshold which leads into the palace of justice. In the process of gaining our rightful place we must not be guilty of wrongful deeds. Let us not seek to satisfy our thirst for freedom by drinking from the cup of bitterness and hatred. We must ever conduct our struggle on the high plane of dignity and discipline. We must not allow our creative protest to degenerate into physical violence. Again and again we must rise to the majestic heights of meeting physical force with soul force.”

a) Does this surprise you? Why or why not?
b) Is Dr. King’s appeal still as important today as it was 50 years ago? Explain your answer.

4. Toward the end of his speech, Dr. King said:

What bible passage was Dr. King quoting? (Answer found at the bottom of “Resources”)

At the White House Rose Garden on November 2, 1983, President Ronald Reagan signed a bill creating a federal holiday to honor Dr. King. Observed for the first time on January 20, 1986, it is called Martin Luther King, Jr. Day. Following President George H. W. Bush’s 1992 proclamation, the holiday is observed on the third Monday of January each year, near the time of King’s birthday. On January 17, 2000, for the first time, Martin Luther King Jr. Day was officially observed in all fifty U.S. states. (from wikipedia.org)

NOTE: 2015 marked the 50th anniversary of the march in Selma, Alabama.

Watch a video of Dr. King’s “I have a dream” speech:

“The voice of one crying in the wilderness: “Prepare the way of the Lord; make straight in the desert a highway for our God.
Every valley shall be exalted and every mountain and hill brought low; the crooked places shall be made straight and the rough places smooth;  The glory of the Lord shall be revealed, and all flesh shall see it together; for the mouth of the Lord has spoken.”