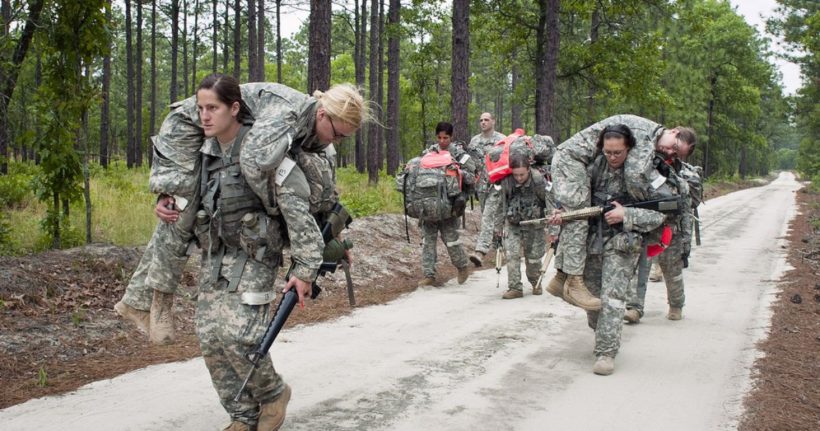 (by Jim Michaels, USA Today) WASHINGTON — A Marine Corps study that found all-male ground combat units more effective than teams that included women has raised new concerns about the Pentagon’s push to open all jobs to women next year.

A summary of results released Thursday from the unprecedented study showed that all-male ground combat squads were faster, stronger and more lethal in most cases than units that included women. The women also suffered higher injury rates during physically demanding training.

The Marine Corps and other branches of the military face a deadline the Pentagon has set for requiring military branches to open all specialties to women, including infantry and special operations forces, beginning January 1.

Each branch has until the end of this month to request an exception to the order for some occupations.

The Marine Corps has not yet said whether it will request a waiver, but the study’s results are likely to fuel a growing debate over including women in ground combat jobs. …

Obama administration officials have said their intent is to open all jobs to women and have set the bar high for waivers. “The department’s policy is that all ground combat positions will be open to women, unless rigorous analysis of factual data shows that the positions must remain closed,” Defense Secretary Ashton Carter said last month.

Navy Secretary Ray Mabus, who oversees the Marine Corps, said the study would not change his mind about opening all career fields to women.

The Army also has not said if it will seek waivers. The Navy and Air Force, which have fewer jobs that now bar women, have not announced their plans.

…Last month, after having opened its elite Ranger school to women, the Army graduated the first two female officers from the program, an arduous two-month course where students hike long distances with heavy packs and operate with little sleep or food. While Ranger units remain closed to women, Army Secretary John McHugh has since announced that the school will remain open to all qualified women.

The services have also launched efforts to determine the physical requirements for all military jobs and create tests to screen servicemembers for specific fields. The Marine Corps study (the Marines’ Ground Combat Element Integrated Task Force), in which a a task force was created that allowed commanders to compare all-male with gender-integrated units allowed the service to compare not just individual performance, but also how a team with women performs as a unit. The task force consisted of about 300 men and 100 women who trained together for nearly a year.

The all-male units outperformed gender-integrated units on 69% of the 134 tasks that were evaluated, according to the summary. The integrated teams performed better in two machine-gun related tasks than the all-male teams. There was no difference on the remaining tasks.

Despite advances in technology, the wars in Afghanistan and Iraq have been largely traditional infantry fights with foot soldiers battling each other on deserts and mountains.

Marine infantry units are required to walk long distances carrying equipment weighing more than 100 pounds and be prepared to fight once they arrive at their destination.

The study concluded that all-male squads moved faster than integrated units, particularly when carrying heavy weapons, such as machine guns and mortars.

“Anytime we did movement under load, all-male groups outperformed integrated groups,” said Paul Johnson, a Marine civilian official who helped develop and oversee the experiment. “The true basis of this was to gather some hard qualitative metrics on what we would expect to see in combat effectiveness. Is every member of the group contributing equally to the outcome? That’s important to know.”

On marksmanship, men who had not been through infantry school hit targets 44% of the time with M4 rifles, besting infantry-trained women, who hit targets 28% of the time.

Women also struggled with obstacles designed to test upper body strength in simulated combat. For example, in scaling an 8-foot wall obstacle, researchers wrote, male Marines would throw their packs to the top of the wall, while female Marines “required regular assistance” to do the same. During simulated casualty evacuations involving a 200-pound dummy, mixed-gender groups were notably slower at the task, except in cases when a single Marine would move the dummy using a fireman’s carry. And in those cases, “it was most often a male Marine who ‘evacuated’ the casualty,” according to the findings analysis. …Women make up about 7% of the Marine Corps, the most male-dominated service. The Marine Corps is organized around the infantry, which is designed to be an expeditionary force capable of spending months in the field, often living in primitive conditions. It is physically demanding work.

The Marine Corps opened its infantry officer course to women, but none of 29 female volunteers completed it, though women have completed the infantry course for enlisted personnel. …

Despite the ban on infantry jobs, women have been exposed to combat after 14 years of war in Iraq and Afghanistan, where more than 280,000 women have deployed, according to the Pentagon.

The Pentagon has steadily increased the number of jobs and occupations open to women. During the past two years, 111,000 women can hold positions that previously were closed to them.

About 220,000 positions remain closed to women out of about 2 million positions in the active duty, guard and reserves.

It remains unclear how all these data findings will affect the ultimate gender-integration process for the Marine Corps. Even if Commandant of the Marine Corps Gen. Joseph Dunford does request that certain infantry jobs remain closed to women for reasons tied to combat effectiveness, his request may be overridden by Navy Secretary Mabus or Defense Secretary Ash Carter, who will govern implementation of the Jan. 1 integration order.

1. Define the following as used in the article:
unprecedented
exception
waiver

2. What were the results of a recent Marine Corps study on integrating women into combat units? Be specific.

3. Why has this study raised concerns?

4. What have Obama administration officials said their intent is for women in the military?

5. How will the findings from this study affect the decisions military brass make on women in combat?

6. a) How were the wars in Afghanistan and Iraq fought?
b) Should this be considered when opening infantry positions to female soldiers? Explain your answer.
c) What problems do you think might occur with this type of warfare?

7. The summary of the Marine study quotes a 1992 report from the Presidential Commission on the Assignment of Women in the Armed Forces. That was the last time the government studied the effect of gender integration on ground combat units. According to that commission, winning a war is sometimes “only a matter of inches.” Back then, that commission concluded:

“… unnecessary distraction or any dilution of the combat effectiveness puts the mission and lives in jeopardy. Risking the lives of a military unit in combat to provide career opportunities or accommodate the personal desires or interests of an individual, or group of individuals, is more than bad military judgment. It is morally wrong.”

What do you think? Explain your answer.

(from San Diego’s KPBS):  The Pentagon lifted a ban prohibiting women from serving in combat in January 2013. The question since then has been whether the military could open up those jobs without lowering standards.

From the summary of the study, here are some key findings:

Speed: All-male squads, regardless of infantry MOS, were faster than the gender-integrated squads in each tactical movement. The differences were more pronounced in infantry crew-served weapons specialties that carried the assault load plus the additional weight of crew-served weapons and ammunition.

Lethality: All-male 0311 (rifleman) infantry squads had better accuracy compared to gender-integrated squads. There was a notable difference between genders for every individual weapons system (i.e. M4, M27, and M203) within the 0311 squads, except for the probability of hit & near miss with the M4.

Injuries: In addition to performance, evidence of higher injury rates for females when compared to males performing the same tactical tasks was noted. The well documented comparative disadvantage in upper and lower-body strength resulted in higher fatigue levels of most women, which contributed to greater incidents of overuse injuries such as stress fractures. Research from various U.S. and allied military studies reveal that the two primary factors associated with success in the task of movement under load are 1) lean body mass and 2) absolute VO2 Max.

And here are some raw numbers that help explain the different physiologies:

•Within the research at the Infantry Training Battalion, females undergoing that entry-level training were injured at more than six-times the rate of their male counterparts

-27% of female injuries were attributed to the task of movement under load, compared to 13% for their male counterparts, carrying a similar load

• During the GCEITF assessment, musculoskeletal injury rates were 40.5% for females, compared to 18.8% for males

-Of the 21 time-loss injuries incurred by female Marines, 19 were lower extremity injuries and 16 occurred during a movement under load task

Of course, this news comes just days after two female soldiers graduated from the U.S. Army’s Ranger School at Fort Benning, Ga. As we reported it’s a grueling course that “puts a premium on physical strength and endurance.”

The summary of the study quotes a 1992 report from the Presidential Commission on the Assignment of Women in the Armed Forces. That was the last time the government studied the effect of gender integration on ground combat units.

According to that commission, winning a war is sometimes “only a matter of inches.”

Back then, that commission concluded: “… unnecessary distraction or any dilution of the combat effectiveness puts the mission and lives in jeopardy. Risking the lives of a military unit in combat to provide career opportunities or accommodate the personal desires or interests of an individual, or group of individuals, is more than bad military judgment. It is morally wrong.”