Man gets 50 years for stealing $1.2M worth of fajitas 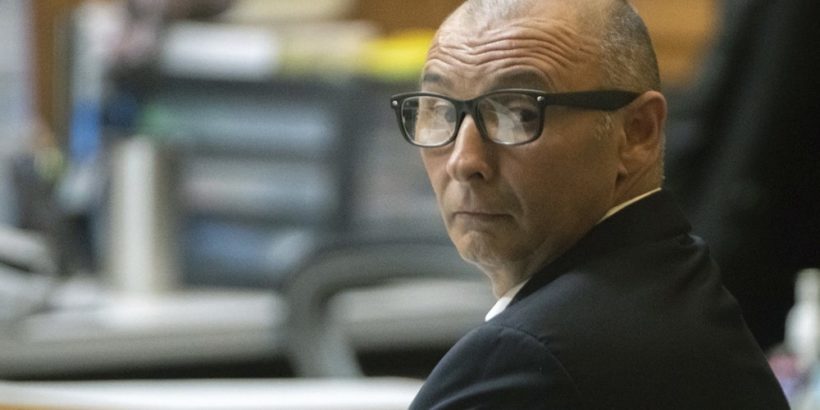 Defendant Gilberto Escamilla looks back before the start of a sentencing hearing Friday, April 20, 2018, in the 107th state District Courtroom in Brownsville, Texas. Escamilla entered two pleas of guilty for charges related to the theft of over 1-million dollars of meats he stole and resold over two years through his position with Cameron County. (Jason Hoekema/The Brownsville Herald)

(Compiled from UPI, NBC News and the Brownsville Herald) – A former Texas juvenile center employee who stole $1.2 million worth of fajitas was sentenced to 50 years in prison for theft by a public servant.

Visiting State District Judge J. Manuel Banales on Friday ordered the 50-year sentence for Gilberto Escamilla, 53, who admitted to using taxpayer money to buy fajita meat and sell it for profit while working as a purchaser for Darrel B. Hester Juvenile Detention Center.

“I feel horrible. I wish I could take this back. It was selfish. It started small and got bigger and out of control,” Escamilla said in his testimony. “It got to the point where I couldn’t control it anymore.”

Escamilla was arrested in 2017 after $800 worth of fajitas, which the facility doesn’t serve, were delivered while he was away from work at a doctor’s appointment.

After being fired and arrested, Escamilla’s house was searched by police, who found packages of the fajitas in his refrigerator.

“He would literally, on the day he ordered them, deliver them to customers he already had lined up,” Cameron County District Attorney Luis Saenz told The Brownsville Herald. “We’ve been able to uncover two of his purchasers, and they are cooperating with the investigation.”

Because Escamilla stole more than $200,000 worth of goods, Texas law considers the crime to be a first degree felony and allows for a sentencing of up to 99 years in prison. It also allows for a more severe punishment if the defendant commits a crime while acting as a public servant.

“We feel a strong message should be sent,” Gilman said.

Escamilla was allowed a brief moment to say goodbye to his family before being escorted away to begin his sentence.

Compiled from news reports at UPI, NBC News and the Brownsville Herald.

2. a) What did Gilberto Escamilla admit to doing?
b) For how long had he gotten away with the theft?

3. How was Mr. Escamilla caught?

4. What did Mr. Escamilla do with the fajitas he had delivered to (and paid for by) the detention facility?

5. a) What two provisions in Texas laws allowed for a 50 year prison sentence?
b) For what reason did Assistant DA Peter Gilman say the state asked for such a lengthy sentence?
c) Do you agree with the sentence and the reason for it? Explain your answer.

6. One reader commented that others should be held accountable as well, saying “how could no one else know this was going on for so long?” What do you think? Should anyone (in accounting, ordering, management) be held accountable in any way? Explain your answer.

7. During the trial, Mr. Escamilla said, ”I feel horrible. I wish I could take this back. It was selfish. It started small and got bigger and out of control,” Escamilla said in his testimony. “It got to the point where I couldn’t control it anymore.” What is your reaction to his assertions?