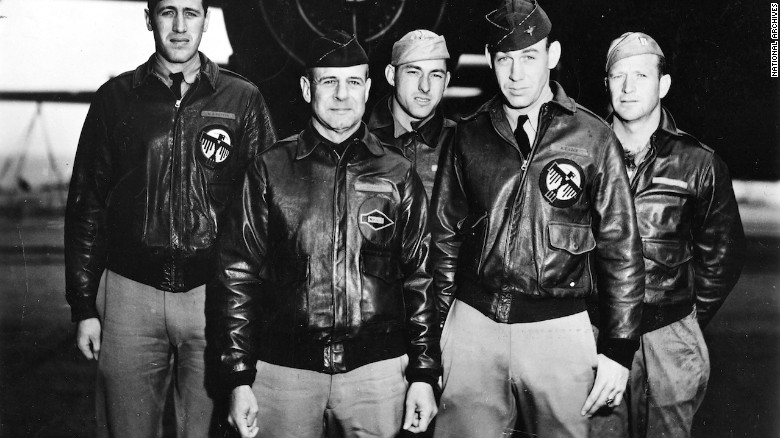 (by Andrew V. Pestano, UPI) — Richard Cole, the last surviving U.S. servicemember who participated in the Doolittle Raid against Japan following the Pearl Harbor attack, took part in a 75th anniversary ceremony at the National Museum of the U.S. Air Force in Dayton, Ohio, on Tuesday.

In retaliation for the surprise attack on Pearl Harbor, 16 U.S. bombers carrying 80 men took off from the USS Hornet aircraft carrier to bomb Tokyo, Yokohama, Yokosuka, Nagoya, Kobe and Nagoya on April 18, 1942.

In the attack, dubbed the Doolittle Raid after the group’s leader, renowned aviator Lt. Col. James Doolittle, all but three of the 80 U.S. servicemembers survived the mission. Most returned to the United States. One of the B-25 Mitchell medium bombers survived. Most crashed in Chinese territory or were ditched at sea.

To commemorate the mission that followed the United States’ entry into World War II, Cole, who is 101 years old, will complete a decades-long tradition of drinking a toast to a deceased Raider and of turning over a goblet belonging to the late fellow member. This year, Cole will toast to David Thatcher, a fellow Raider who died on June 22, and he will turn over Thatcher’s goblet.

“It’s kind of lonely because I’m the last one,” Cole told CNN.

When asked what the 75th anniversary of the attack means to him, Cole, with a twinkle in his eye, said, “It means I’m getting to be an old man.”

In the commemoration event, 17 B-25 bombers were on display and there was a B-1 flyover at the conclusion of the memorial service, in which a wreath was laid.

The last year the ceremony was held was in 2013 because of the Raiders’ ages and increasing difficulty traveling. Four Raiders were still living at that event.

“I propose a toast to those who were lost on the mission and to those who have passed away since,” Cole said. “May they rest in peace.”

The U.S. Air Force Museum said…the Doolittle Raid “…forced the Japanese to recall combat forces for home defense, raised fears among the Japanese civilians and boosted morale among Americans and our allies abroad.”

Tokyo radio broadcast that “enemy bombers appeared over Tokyo for the first time since the outbreak of the current war of Greater East Asia.” …

[CNN reporter Richard Roth interviewed Mr. Cole this week. He wrote: “I asked Cole his secret to living past 101. He simply said, ‘Keep moving.’ He said he would like to be remembered along ‘with the rest of the people that had an impact on winning the war.’ I asked Cole if he felt he was a hero. A quick response. No.’]

From United Press International (UPI). Reprinted here for educational purposes only. May not be reproduced on other websites without permission from UPI .com.

3. All but 3 of the 80 men who participated survived the mission. What tradition did they follow for years?

4. a) Watch the video under “Resources” below the questions. How does Richard Cole, the last surviving member, view the commemoration and the fact that it is the 75th anniversary?
b) How did he say he would he like to be remembered when asked by CNN’s Richard Roth?

5. What positive effects did the Doolittle Raid have on U.S. war efforts?

6. Read the “Background” below. Visit some of the links under “Resources” to read more about the Doolittle Raid. How do the servicemen involved in this mission inspire you? Be specific.

The 80 pilots, navigators, engineers, bombardiers and gunners took off in B-25 Mitchell bombers from the USS Hornet in the Pacific Ocean bound for Japan. A bomber takeoff from the deck of an aircraft carrier had never been done. The crew found themselves scrambling to make a hasty takeoff, 12 hours ahead of schedule, after they were spotted by Japanese fishing boats. The early departure also meant the planes would likely run out of gas before landing in friendly China. Cole was the co-pilot in the lead plane alongside the commander of the mission, Jimmy Doolittle. (read more at CNN)

The Doolittle Raid, on Saturday, April 18, 1942, was an air raid by the United States of America on the Japanese capital Tokyo and other places on the island of Honshu during World War II, the first air strike to strike the Japanese Home Islands.

It demonstrated that Japan itself was vulnerable to American air attack, served as retaliation for the Japanese attack on Pearl Harbor on Sunday, December 7, 1941, and provided an important boost to American morale. The raid was planned and led by Lieutenant Colonel James “Jimmy” Doolittle of the United States Army Air Forces.

The raid had its start in a desire by President Franklin D. Roosevelt, expressed to the Joint Chiefs of Staff in a meeting at the White House on 21 December 1941, that Japan be bombed as soon as possible to boost public morale after the disaster at Pearl Harbor.

Doolittle later recounted in his autobiography that the raid was intended to bolster American morale and to cause the Japanese to begin doubting their leadership, at which it succeeded:

The Japanese people had been told they were invulnerable … An attack on the Japanese homeland would cause confusion in the minds of the Japanese people and sow doubt about the reliability of their leaders. There was a second, and equally important, psychological reason for this attack … Americans badly needed a morale boost.

The concept for the attack came from Navy Captain Francis Low, Assistant Chief of Staff for anti-submarine warfare, who reported to Admiral Ernest J. King on 10 January 1942 that he thought twin-engine Army bombers could be launched from an aircraft carrier, after observing several at a naval airfield in Norfolk, Virginia, where the runway was painted with the outline of a carrier deck for landing practice. The attack was planned and led by Doolittle, a famous military test pilot, civilian aviator and aeronautical engineer before the war. (read more at the wikipedia entry for Doolittle Raid)