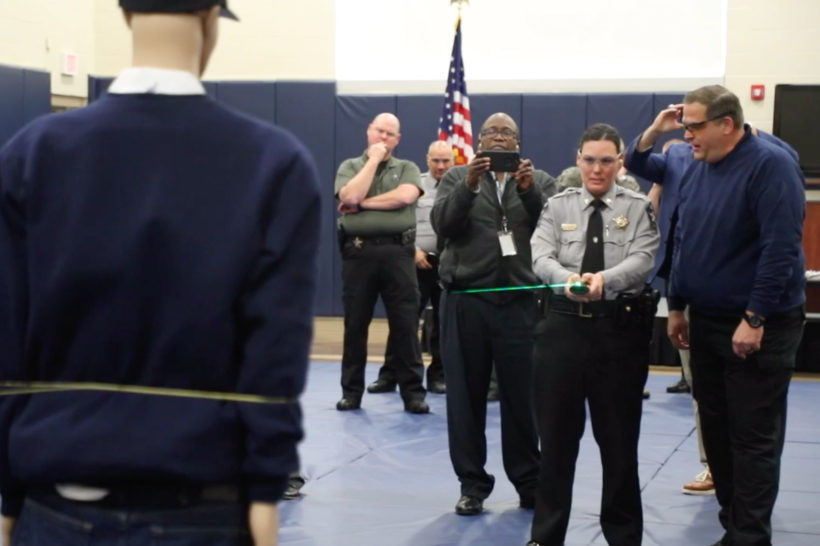 Officials from Wrap Technologies demonstrated the BolaWrap 100, a tool that shoots out an 8-ft kevlar cord that wraps around a suspect, to law enforcement officials at the Wake County Law Enforcement Training Center in Raleigh, NC, Dec. 3, 2019.

(by Mike Puente, Los Angeles Times) – A new device resembling a gadget on Batman’s utility belt will soon be in the hands of several hundred Los Angeles police officers to help detain individuals without using force.

The tool, called the BolaWrap 100, fires a Kevlar cord that ensnares an individual’s body to restrict mobility, giving officers seconds to swarm the person without using more drastic measures such as a Taser or gun.

The handheld device, made by Las Vegas-based Wrap Technologies, sounds like a gun when it deploys a tether to entangle someone between 10 and 25 feet away. Barbs attached to the end of the tether grab hold of the person as it wraps around their arms or legs.

Top LAPD leaders told the Los Angeles Board of Police Commissioners, the civilian panel that oversees the department, last week that officers will start testing the tool for free for 90 days in January. The 200 devices will be given to officers across the city once they are trained, Deputy Chief Martin Baeza, head of the personnel and training bureau, said during a discussion about next year’s budget.

“We are very excited to be piloting the BolaWrap,” Baeza said, to determine if “it meets the needs and standards that the LAPD is looking for.”

…The BolaWrap is not something officers would use to counter suspects with firearms, but it could be used against knives or other objects, numerous police officials told The Times.

Tom Smith, president of Wrap Technologies, co-founded Taser International, now Axon Enterprises, in 1993 and served as president until October 2006. He told Reuters in September that he saw the success of the Taser as proof there was an appetite for less-lethal tools in policing.

Mike Rothans, chief operating officer at Wrap Technologies and retired assistant sheriff with the Los Angeles Sheriff’s Department, said the barbs create a “very small puncture” when the tether wraps around a person and could cause more pain if a suspect tries to pull the cords off.

“This is a restraint device,” Rothans said. “This is meant to put time and distance between the officer.”

In October, Fresno officers responded to a man armed with a knife who had just stabbed several people. In video recording of the incident, an officer repeatedly yells, “Bola, Bola, Bola,” before firing the device. The Kevlar cord did not wrap around the man’s legs.

Lt. Mark Hudson, a police spokesman, said the BolaWrap was effective in that it distracted the man, who was later shocked with a stun gun before being handcuffed. The department bought several BolaWraps and has been testing them this year on the street.

Police across the country are under intense scrutiny for their use of force in situations where a person is unarmed or suffers from mental illness.

Dozens of departments in the United States are either testing the devices or have purchased them this year. The Fresno Police Department started training officers in January. Officers in Hendersonville, N.C., starting using the devices last week on the street.

Hendersonville Police Chief Herbert Blake said he wanted officers to have another option to help protect citizens when force might be needed in situations involving individuals with mental issues. When officers have to use extreme force in those encounters, it sometimes damages the department’s standing in communities, Blake said, adding: It “often can’t be repaired relationship wise. We’re just trying to protect and serve with empathy.”

Bell (California) Police Chief Carlos Islas, a former LAPD captain, said his department is training officers and plans to deploy three devices on the street in January. He expects the tool to be mostly used on those suffering mental crises or others suspected of being under the influence who refuse to comply with officers. He cautioned the device is one of many tools that officers could use, but it may not work in every situation.

“If you deploy a wrap tool, it buys time for officers to deploy a secondary option,” Islas said. “It will inevitably restrain someone. It’s a tool that’s been a long time coming.”

Before training officers, Islas said he volunteered to be tethered to determine the device’s impact. The barbs stung some when they attached to his clothes, but the device was barely felt, he said. “I wouldn’t put anything in the field without trying it myself.”

Last month, the Santa Cruz County Sheriff’s Office in Northern California spent $25,000 on 20 BolaWraps and extra cartridges to equip 20 patrol deputies with the devices. The agency wanted another tool that wouldn’t injure uncooperative people, said spokeswoman Ashley Keehn. The department could equip all deputies with BolaWraps if they prove useful, she added.

“We’re always looking for new tools to help de-escalate situations,” she said. “Mental health is something that law enforcement has to deal with. If it can save lives, it’s better.”

The Fort Worth Police Department in Texas was the first police agency in the country in April to use the weapon on the street when it encountered an armed suspect who barricaded himself in a home. The man came outside after officers fired tear gas into the home. SWAT Officer Donald McCreery fired the BolaWrap to prevent the man from running.

The BolaWrap allowed take-down officers to gain control of the suspect without injuring anybody, McCreedy said. So far, the SWAT team has eight devices, but they have not been expanded to patrol officers, he said. For the SWAT operators, the BolaWrap is another tool in the team’s arsenal, he said.

“It’s one of the devices that has to fit the situation,” McCreedy said. “It’s a close-proximity weapon. If the situation is right, we will use it.”

Published at latimes .com. Reprinted here for educational purposes only. May not be reproduced on other websites without permission from the Los Angeles Times.

1. What is the purpose of the BolaWrap?

2. How does the BolaWrap work?

3. In what types of situations would police officers utilize the Bola?

4. What do each of the following officers/police departments say about the purpose or use of such a device?
a) Hendersonville Police Chief Herbert Blake
b) Bell (California) Police Chief Carlos Islas
c) Santa Cruz County Sheriff’s Office spokeswoman Ashley Keehn
d) SWAT Officer Donald McCreery Fort Worth, TX Police Department

5. What do you think? Does this non-lethal method make sense for law enforcement officers to use as an alternative to a stun gun etc.? Explain your answer.

Watch a December 3 report from The News & Observer, Raleigh, NC: