Kansas will allow concealed carry of guns without a permit 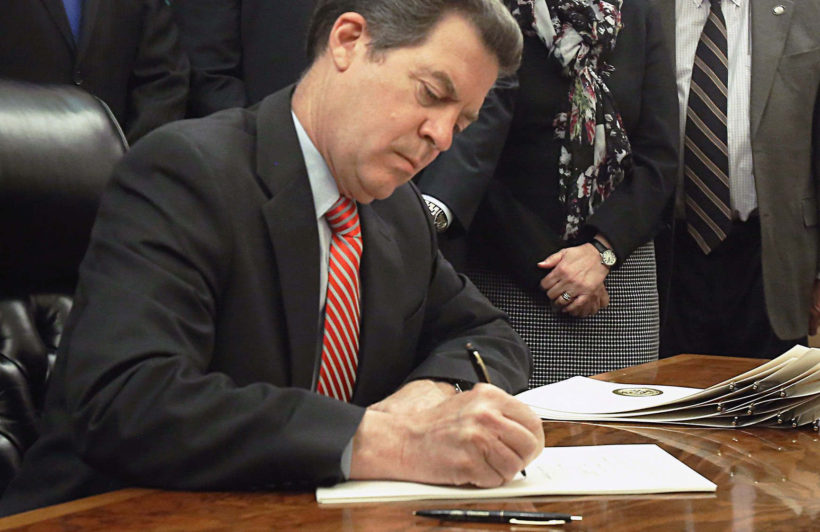 (by Kevin Murphy, Reuters) Kansas City, KS – Kansas residents will be allowed to carry concealed weapons in the state without training or a permit starting in July under a bill signed into law on April 2 by Governor Sam Brownback.

Brownback, a Republican, said the new law will protect the rights of gun owners, while opponents said the measure poses safety risks.

“Responsible gun ownership – for protection and sport – is a right inherent in our Constitution,” Brownback said in a statement.

Alaska, Arizona, Vermont, Arkansas and Wyoming have similar laws and nine other states are considering them, according to the governor’s office. The measure passed with strong support from both chambers of the Republican-controlled Kansas legislature.

Kansas will retain a permitting process for residents who want to carry a concealed weapon in states that require them, Brownback said. Businesses can still post signs that say concealed weapons are not allowed on their property, he said.

Loren Stanton, president of the Kansas chapter of the Brady Campaign to Prevent Gun Violence, questioned the wisdom of making training voluntary for carrying a concealed weapon.

“There is no way that taking away training can make guns safer,” Stanton said. 2. How does Republican Gov. Sam Brownback explain his support for the new law?

3. Why do opponents object to the new law?

4. Which states have similar laws? How many others are considering them?

5. What will businesses still be allowed to do under the new law?

6. Do you think requiring residents to take a basic gun safety course is unreasonable and/or infringes on their constitutional right under the 2nd amendment? Explain your answer.

7. Do you think most gun owners are responsible? Explain your answer.

8. a) Do you think allowing residents to carry concealed weapons would reduce or increase crime in your state? Explain your answer.
b) Ask a parent the same question.

Carrying a concealed handgun in public is permitted in all 50 states as of 2013, when Illinois became the last state to enact concealed carry legislation. Some states require gun owners to obtain permits while others have “unrestricted carry” and do not require permits.

Proponents of concealed carry say that criminals are less likely to attack someone they believe to be armed. They cite the 2nd Amendment’s “right of the people to keep and bear arms,” and argue that most adults who legally carry a concealed gun are law-abiding and do not misuse their firearms.

Opponents of concealed carry argue that increased gun ownership leads to more gun crime and unintended gun injuries. They contend that concealed handguns increase the chances of arguments becoming lethal, and that society would be safer with fewer guns on the street, not more. (from procon.org)