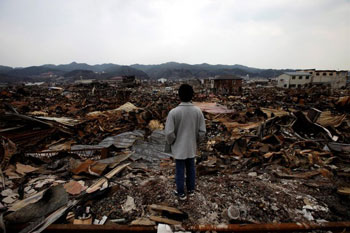 (by Christopher Johnson, WashingtonTimes.com) Special to the Washington Times:  KESENNUMA, Japan – Hideto Miura, 37, never thought he would become a scavenger.

He was working at a fish-processing plant by the ocean in his hometown of 70,000 when the March 11 tsunami forced him to flee for his life.

Like many other survivors who lost everything, he has been returning here almost daily to search for his car and anything else of value left in one of the most devastated cities in northeastern Japan.

“I have no job and nothing else to do, so I might as well look for things,” he said.

[Photo on the right: A man looks at the devastation, which was partially caused by fire after the earthquake and tsunami that struck Kesennuma.]

Unlike the homeless…of Tokyo and Osaka, [these]…temporary scavengers include parents who were working as fishermen, teachers, mechanics and clothing makers less than a month ago.

At first, most were too scared of the sea to come back from evacuation shelters in schools and town halls perched on bluffs above the disaster zone.

But nearly three weeks of desperation and depravation have given them the courage to brave the nightmarish area they used to call home.

Though accustomed to blood and fish guts at work, Mr. Miura said it took time to get over the fear barrier in the 5-mile-wide swath between the sea and the highway, where police say at least 1,200 are dead or missing, and perhaps 40,000 or more lost homes and land they might never recover.

“I’m only afraid at night now,” he said, “because it’s perfectly dark, and full of ghosts.”

He was no longer disgusted by the smell of corpses buried under debris and the throat-burning acrid air from homes and vehicles charred by towering fires, which burned out of control long after the tsunamis subsided on the cold night of March 11.

But he was aghast to see that even fish…could 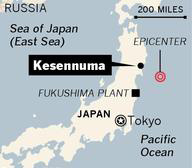 not survive the onrushing black tsunamis.

“What a waste,” he said, pointing at a plump katsuo fish, widely used in sushi.

“That one is about [6.6 pounds], and sells for over [$36.50]. This was a fish-processing community. It will be a long time before they can ever sell fish here again.”

Wearing rubber boats, gloves and a white mask – like everybody else in the zone – he sifted through debris looking for his car, a white Honda.

He finds white cars squashed under ships or perched atop houses and train tracks. Many leak gas and oil into the Okawa River, where…sea gulls sit on islands of submerged autos. None of the thousands of trashed white cars is his.

“The problem is, in Kesennuma almost everybody was driving a white car,” he said.

Although he never expected to drive his car again, and insurers will not cover losses caused by earthquakes or tsunamis, he at least wants some memorabilia – a license plate, perhaps.

He was encouraged by another survivor, Ryuichi Saito, who found his car smashed into a house a few miles from where he parked it.

“I just bought this last year,” said Mr. Saito, unscrewing the plates and taking the insurance papers from the dashboard of his Nissan hatchback. “I spent most of my savings on it, and now it’s worth nothing. But at least I can keep the plate.”

After a few hours of searching, Mr. Miura found a bicycle – with one flat tire – near a flooded elementary school where Japanese soldiers shovel out muck and park their aid delivery trucks in what used to be a soccer field.

He also uncovered a can of tuna, which he gave to an 86-year-old woman who, grateful to be alive, seemed unfazed by the menacing chaos around her.

A veteran of this hellish landscape, Mr. Miura tried to help another woman, disoriented by the total disappearance of familiar street signs and landmarks other than train tracks, sakura trees along the river, a ransacked karaoke hall and the wreckage of the South Kesennuma train station.

“I want to see if my friend is still alive, but I can’t find where she used to live,” she explained from behind a white mask. “Everything has been erased or moved.”

With cold rain or snow roiling on the horizon, Mr. Miura and the other scavengers hurried to get out before the disaster zone became a disease-ridden bowl of soup.

Near some jack-knifed trucks and tour buses, he found a garbage can from his company, Ashikawa Honten, about three miles from where he last saw it at work.

“This might be the only thing left from our workplace,” he said. “Everything else was obliterated, because we were right by the sea.”

He stared at the garbage can for a moment but decided that was not the souvenir he wanted.

“I think I’m going to look for work in Tokyo or Osaka. Maybe as a waiter or office worker, in a sanitary and sane environment,” he said.

“Most people will never come back here. There’s nothing to come back to. Only this nightmare.”

2. As referenced in the article, what types of jobs did people in Kesennuma have before the destruction?

3. Why is Kesennuma resident Hideto Miura returning to the town daily to search for his car?

4. a) How would you describe Mr. Miura’s attitude after losing everything: his car, his home, his job, his town?
b) What is Mr. Miura’s plan for the future?

5. Today’s article is a Human Interest story. A human interest story is a feature story that discusses a person or people in an interactive and/or emotional way. It presents people and their problems, concerns, or achievements in a way that brings about interest or sympathy in the reader or viewer. Was this human interest story of interest to you? Explain your answer.

6. Read about Kesennuma under “Background” and watch the videos under “Resources”. Then read about how the organization Samaritan’s Purse is offering help and hope to one community destroyed by the tsunami. What do you think our response to this disaster should be?

Read about how Samaritan’s Purse is helping in Japan at samaritanspurse.org/index.php/articles/starting_over1.

Watch two videos of the tsunami waters devastating the city of Kesennuma, Japan: