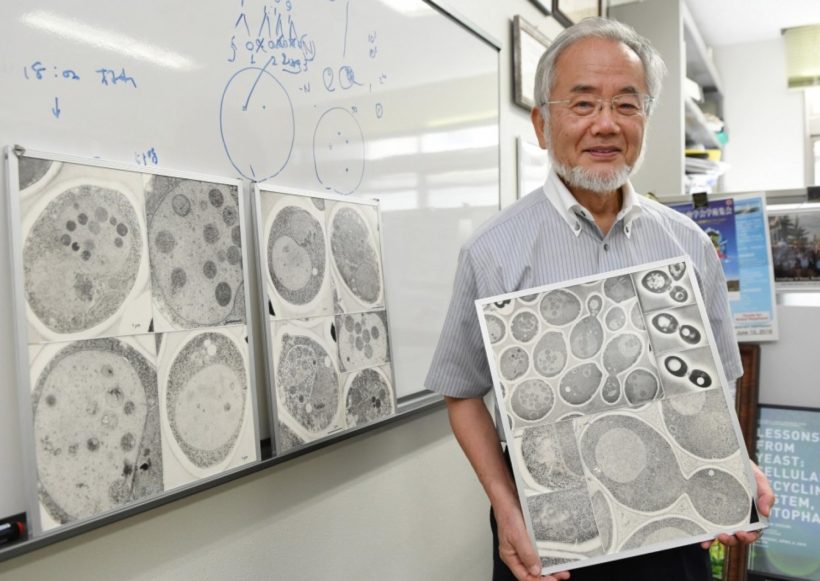 Japanese scientist Yoshinori Ohsumi was awarded this year's Nobel Prize in medicine on Oct. 3, for discoveries related to the degrading and recycling of cellular components.

(by Alastair Wanklyn, Japan Times) – Japanese microbiologist Yoshinori Ohsumi on Monday won the 2016 Nobel Prize in physiology or medicine for his work on cell autophagy, a process that helps the body remove unwanted proteins.

Ohsumi, 71, of the Tokyo Institute of Technology, is credited with discovering the mechanisms that allow cells to break down and recycle unwanted components. They enclose the item in a sack and then transport it to a recycling unit known as a lysosome for destruction.

Such knowledge may be invaluable in the fight against cancer, Alzheimer’s and other diseases.

“Difficulties in studying the phenomenon meant that little was known until, in a series of brilliant experiments in the early 1990s, Yoshinori Ohsumi used baker’s yeast to identify genes essential for autophagy,” the Nobel committee said in its citation.

“He then went on to elucidate [explain] the underlying mechanisms for autophagy in yeast and showed that similar sophisticated machinery is used in our cells.”

It said his work led to understanding of the “fundamental importance” of autophagy in many physiological processes, such as in the adaptation to starvation or response to infection. [In studying thousands of yeast mutants, Ohsumi identified 15 genes essential for autophagy. It turned out that virtually identical mechanisms exist in human cells as well.]

Ohsumi told Japanese public broadcaster NHK he felt “very honored” when he heard the news. His work, he added, was driven by the desire to do something unique. [Ohsumi, who is 71 and now serves as professor emeritus at the Tokyo Institute of Technology, called the prize the “greatest source of joy and pride” for a scientist.] [He said he chose to focus on the cell’s waste disposal system, an unfashionable subject at the time, because he wanted to work on something different. “I don’t feel comfortable competing with many people, and instead I find it more enjoyable doing something nobody else is doing,” he added. “In a way, that’s what science is all about, and the joy of finding something inspires me.”] [“Looking into bodily processes, I found that we have an ongoing renewal process without which living organisms can’t survive,” Ohsumi told NHK shortly after the announcement. “This recycling process did not receive as much attention as it deserved, but I discovered that we should be paying more attention to this autophagy process,” he said, adding that I was “lucky” to make the discovery early on in his career.

The Nobel committee noted that “autophagy has been known for over 50 years.” However, its fundamental importance in physiology and medicine “was only recognized after Yoshinori Ohsumi’s paradigm-shifting research.” This amazing graph, which was displayed on a screen when the award was announced, shows just how much other work has been built on the discovery:] Ohsumi generated an enormous interest in autophagy and is now one of the most intensely studied areas of biomedical research.

Ohsumi is the 25th Japanese to win a Nobel Prize, including individuals who later obtained citizenship of other countries, and he is the fourth to win the medicine prize.

Ohsumi is expected to attend the Nobel awards ceremony Dec. 10 in Stockholm, where he will also receive a prize of 8 million kroner (¥95 million) [$935,000].

In March last year, he was awarded a 2015 Canada Gairdner International Award, also for his work on autophagy.

[Last year’s prize was shared by three scientists who developed treatments for malaria and tropical diseases. It was the 107th award in that category since the first Nobel Prizes were handed out in 1905.

The announcements continue with physics on Tuesday and chemistry on Wednesday and the Nobel Peace Prize on Friday. The economics and literature awards will be announced next week. Each prize is worth $935,000.]

The Norwegian Nobel Committee has received a record 376 nominations this year, almost a hundred more than the previous record set in 2014.

Predicting the winners is a game of chance…the selection process is nothing if not opaque. Shortlists are never released. Nominees only become known if their supporters announce their submissions.

Compiled from a news story by Japan Times with information from The Washington Post. Reprinted here for educational purposes only.  May not be reproduced on other websites without permission from JapanTimes .co.jp.

1. Who won the Nobel Prize for medicine this year?

3. What did Japanese microbiologist Yoshinori Ohsumi discover in his research? Be specific.

4. Explain the benefits Mr. Ohsumi’s discovery could produce. (Include how others describe the possible benefits of his discovery. See “Background” below the questions.)

5. What led Mr. Ohsumi to conduct this research?

7. How does Yoshinori Ohsumi’s work inspire you?

Autophagy is the body’s internal recycling programme – scrap cell components are captured and the useful parts are stripped out to generate energy or build new cells. The process is crucial for preventing cancerous growths, warding off infection and, by maintaining a healthy metabolism, it helps protect against conditions like diabetes.

Dysfunctional autophagy has been linked to Parkinson’s disease, type 2 diabetes, cancer and a host of age-related disorders. Intense research is underway to develop drugs that can target autophagy to treat various diseases.

The word autophagy originates from two Greek words meaning “self-eating”. It refers to the process in which cellular junk is captured and sealed in sack-like membranes, called autophagosomes. The sealed contents are transported to another structure called the lysosome, once considered little more than the cellular rubbish bin.

By studying the process in yeast cells, Ohsumi identified the main genes involved in autophagy and showed how the proteins they code for come together to build the autophagosome membrane. He later showed that a similar cellular recycling process occurs in human cells – and that our cells would not survive without it.

Juleen Zierath, a member of the Nobel committee, said: “Every day we need to replace about 200 to 300g of protein in our bodies… We are eating proteins every day, about 70g, but that’s not enough to take care of the requirement to make new proteins. Because of this machinery, we’re able to rely on some of our own proteins, maybe the damaged proteins or the long-lived proteins, and they are recycled with this sophisticated machinery so that we can sustain and we survive.”

Professor David Rubinsztein, deputy director of the Cambridge Institute for Medical Research at the University of Cambridge, said that Ohsumi’s discoveries had provided deep insights into the biology underpinning infectious diseases, cancers, Huntington’s and Parkinson’s.

“I’m very happy he’s got this year’s Nobel prize, it’s very well deserved,” he said. “His lab mainly works in yeast. They did the initial screens that enabled the discovery of key genes that are involved in autophagy. So many other labs have exploited his discoveries, directly or indirectly, to see why it’s important in diseases.”

Giovanna Mallucci, a professor of clinical neuroscience at the University of Cambridge, said that Ohsumi’s discoveries were paving the way for new approaches to treating diseases, from cancer to neurodegenerative illnesses.

“I think it’s very important that this area of science been recognised,” she said. “The important principle here is going for common mechanisms in disease. It opens up avenues to treating these disorders that are different from more conventional disease-specific approaches.” (from the UK Guardian)

Visit the website to read about the Nobel Prize in medicine.