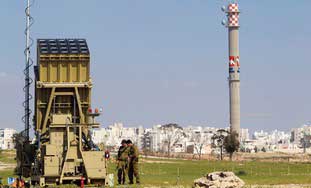 (by Arieh O’ Sullivan, JPost.com) BEERSHEBA — Zmira Almog quietly arranges a bouquet of flowers in her shop on the main road of Beersheba, Israel’s largest city in the south and latest target for rockets fired by the Palestinians from the Gaza Strip.

On Sunday, the Israeli Air Force deployed for the first time home-grown anti-rocket technology giving residents a sense of security and sending what Israeli leaders say is a deterrence message that rocket attacks will be dealt with a firm hand.

“I am happy,” Almog says. “I believe this is going to give us a sense of security. I hope that it works. I hope that we won’t need to use it and it won’t be necessary, but I have a better sense.”

The rocket shield is called Iron Dome and its first battery was deployed on the dunes on the outskirts of Beersheba facing Gaza, about 40 kilometers (25 miles) to the west on Sunday. Residents of this city of close to 200,000 residents have put pressure on the government to deploy the Iron Dome shield as quickly as possible – and a little faster than the army would like — after two Grad-type rockets slammed into the city last week, injuring one person.

Over the past two weeks, since the border between Israel and Gaza heated up, some 100 rockets and mortar shells have hit Israel, as of yet causing no fatalities. Israeli retaliatory strikes have left at least 13 Gazans dead, according to the Israel Defense Forces. While Hamas says its rockets are aimed at military installations, nearly all of them land in civilian areas. The rockets they use are very simple and inaccurate.

The new defense system, developed by the state-owned Rafael defense industries, is designed to knock down incoming rockets at a range of four to 70 kilometers. The multi-mission radar of each battery is supposed to lock in on incoming rockets and send out a firing sequence to one of its three launchers, each equipped with 20 interceptors.

“Iron Dome is a very capable system, but on the other hand it is important to highlight that we are in the evaluation phase in the operational sites,” says Brig.-Gen. Doron Gavish, commander of Israel’s air defenses. “Today we are trying to accelerate the operational tests in order to be ready as fast as we can.”

Gavish says they have “accelerated” the batteries’ deployment due to the surge in rocket attacks from the Hamas-controlled Gaza Strip over the past two weeks. He was speaking a few hours after Israeli aircraft killed at least two Islamic Jihad men who were part of a squad the Israeli army says was trying to launch a rocket attack.

Israeli Prime Minister Binyamin Netanyahu warned during his weekly cabinet meeting on Sunday that Iron Dome wouldn’t be the only defense against Palestinian rocket attacks.  “I don’t want to create an illusion that the Iron Dome system, which we are deploying for the first time today, will provide a full or comprehensive response,” Netanyahu said. “The real response to the missile threat is in the combination of offensive and deterrent measures with defensive measures, and with a firm stance by the government and public.”

Israeli media reports said that a second Iron Dome battery, which is mounted on mobile trailers, was to be deployed near the coastal city of Ashkelon, another recent target of Palestinian rocket attacks.

The home-made Qassam rockets used by Hamas and other Gaza militants have been gradually upgraded over the years. More recently [they] include Grads, knock-off versions of more sophisticated, longer range rockets originally designed in Russia.

As the rockets’ ranges and force have grown, so has the threat. Where once the rockets launched from Gaza were capable of reaching targets within a few kilometers inside Israel, a thinly populated area of farms and open stretches, today the army fears that millions of Israeli civilians are within rocket range, even if Hamas hasn’t employed its most sophisticated arms.

Iron Dome’s value to Israel extends beyond the contest with Hamas. To its north, the Lebanese Shi’ite movement, Hezbollah, is believed to have a far larger and more lethal arsenal of missiles. In Israel’s 2006 war with Hezbollah, thousands of missile rained down on the country’s north, forcing a third of the country into bomb shelters during the month-long conflict.

Each Iron Dome battery reportedly costs some $50 million and each interception costs some $25,000, a hefty sum considering that the incoming rockets cost just a few-hundred dollars to produce.

But Gavish says the cost shouldn’t be measured missile-for-rocket, but by considering the damage a rocket could cause if it hit a school, hospital or heavily trafficked street.

“It’s more important to understand if you didn’t shoot something down, what would it hit?” he says.

“This is a unique system. There is no other system in the world that shoots missiles against rockets. The Israel Air Force is working very hard to make sure that the system will be able to work at peak performance,” Gavish says.

Despite his confidence, some residents of Beersheba remain ill at ease.

“It’s not going to help 100%. If they fire 10 at one time, okay, maybe they’ll intercept four. What about the other six?” asks Nisso Kfir, owner of a small accessories store in the city, who says the Grad rocket that hit last week landed just 100 meters from his house. “The best protection is to attack. Attack is the best defense.”
But his neighbor Yigal Bar-Eli says his spirits have been boosted by the deployment of the Iron Dome battery to protect his city.

“This will really help the residents of Beersheba, so that next time there’s something like this, it will be able to stop it. It gives us a good feeling and sense of security,” Bar-Eli says.

Sgt. Nadav, an operator of one of the launchers who can only be identified by his first name under army policy, is optimistic that the interceptors will work and is itching to test it on a real incoming rocket.

“It feels good to know that the citizens of Israel depend on us and to know that we can help them against something that is not real easy to protect them from,” he says. “I’ve seen the experiments and I’ve seen how it works. It works pretty well.”

Reprinted here for educational purposes only. May not be reproduced on other websites without permission from the Jerusalem Post. Visit the website at jpost.com.

1. What is the Israeli military’s purpose for deploying Israel’s new anti-rocket system, the Iron Dome near Beersheba?

3. a) Approximately how many rockets have Hamas militants fired into Israel over the past two weeks from the Gaza Strip?
b) Do you think the militants shooting the rockets are concerned about possibly killing Israeli civilians? Explain your answer.

4. How does the Iron Dome work? (What is it designed to do?)

5. Why has the threat to Israeli civilians from Palestinian rockets grown over the years?

6. Why does Israeli Brig.-General Gavish say the Iron Dome is worth the cost ($50 million to build per battery, and $25,000 for each rocket intercepted)?

7. How do Israelis’ views on the Iron Dome differ?

8. Look at the map of Israel under “Resources” below, and find Beersheba and Ashkelon in relation to the Gaza Strip. If you lived in either of those cities, how would you view the deployment of the Iron Dome?

Hamas is a Palestinian Sunni Islamist terrorist organization that currently (since January 2006) forms the majority party of the Palestinian Authority. [It rules the Gaza Strip.]… Hamas is known outside the Palestinian territories for its suicide bombings and other attacks directed against Israeli civilians, as well as military and security forces targets. Hamas’ charter…calls for the destruction of the State of Israel and its replacement with a Palestinian Islamic state in the area that is now Israel, the West Bank, and the Gaza Strip. ….In January 2006, Hamas won a surprise victory in the Palestinian parliamentary elections….  Many [Palestinians] perceived the preceding Fatah government as corrupt and ineffective… (from Wikipedia.org)

Click here for a map of Israel (including the Gaza Strip and the West Bank.)

Read more about the Iron Dome at the Rafael defense co. website at rafael.co.il/Marketing/345-1530-en/Marketing.aspx.

Go to worldatlas.com for a map of Israel and the Middle East.

Huawei shipped goods and services to countries that are subject to U.S. sanctions including Iran and North Korea.

“I’d be surprised if most of you in the audience have not been lobbied by the Chinese Communist Party directly.”