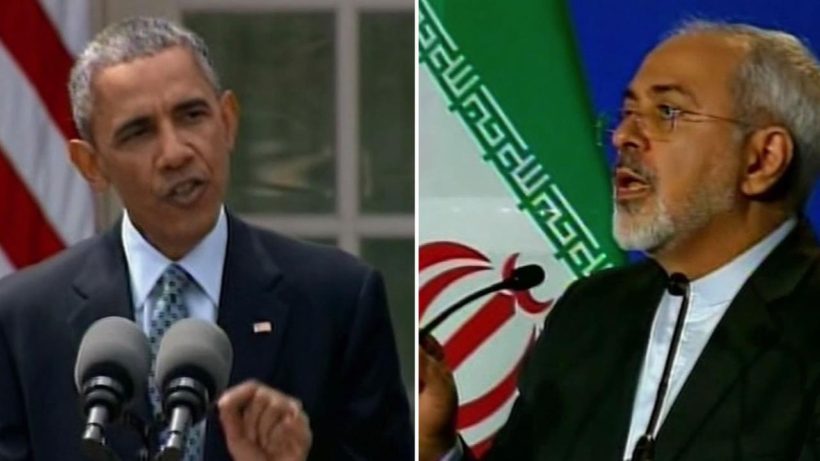 (by Geoff Earle, NY Post) WASHINGTON — US and international negotiators reached the “framework” for a breakthrough nuclear deal with Iran Thursday – but critics led by Israel [said] the deal was a givaway.

“It would increase the risks of nuclear proliferation and the risks of a horrific war,” he said, according to a series of tweets from his spokesman Mark Regev.

“Such a deal would not block Iran’s path to the bomb. It would pave it,” Netanhayu said. “This deal would legitimize Iran’s nuclear program, bolster Iran’s economy & increase Iran’s aggression & terror throughout the Middle East and beyond.”  Regev also tweeted:  “PM Netanyahu says: The alternative is standing firm and increasing the pressure on Iran until a better deal is achieved. #IranTalks  — Mark Regev (@MarkRegevPMO) April 2, 2015

Netanyahu noted that, “Just 2 days ago, Iran said ‘the destruction of Israel is non-negotiable.’”

Negotiators who have been haggling for almost two years talked through the night Wednesday in Switzerland and produced an agreement that will restrict, but not eliminate, Iran’s ability to enrich uranium to make nuclear weapons.

In return, the US and UN agreed to lift punishing sanctions on the oil-rich nation once the deal is completed by June 30.

The Obama Administration tried to sell the accord to staunch opponents like Israel, congressional Republicans, and even some pro-Israel Democrats, who feared Iran was getting more than it was giving up.

Obama delayed a trip to Kentucky to address reporters in the White House Rose Garden, declaring the outcome a “good deal.” [He said the deal will make the world “a safer place.” Netanyahu had tweeted earlier in the evening that the deal would need to “significantly” roll back the Islamic Republic’s nuclear program. Obama openly acknowledged that they “don’t agree” on how to stop Iran, while telling Netanyahu that the new deal was “the most effective” and “best option.”]

“If Congress kills this deal not based on expert analysis and without offering any reasonable alternative, then it’s the United States that will be blamed for the failure of diplomacy,” he warned.

Obama insisted that strict safeguards will prevent the Islamic Republic from cheating. “If Iran cheats, the world will know it,” he said.

But within an hour, Obama’s assurances were undercut by Iranian Foreign Minister Javad Zarif, who tweeted that the administration was spinning the details for its own purposes.

Zarif insisted that sanctions would be lifted as soon as a final deal is signed and would not be phased in. “There is no need to spin using ‘fact sheets’ so early on,” he wrote.

The administration claimed the agreement means Iran can’t build a nuclear bomb for at least a year, ominously asserting that it’s just two to three months away from that goal now.

Some Congress members on both sides of the aisle were not satisfied.

“The details deserve and must get a vote by the U.S. Congress. Until the full details are provided to Congress on June 30th, you can keep me in the ‘highly skeptical’ column,” said Rep. Steve Israel (D-L.I.).

“The Obama Administration’s efforts to get a deal at any cost, will have a greater cost than the world can bear,” House Homeland Security Chairman Michael McCaul (R-Texas) said.

Sen. Bob Corker (R-Tenn.), chair of the Senate Foreign Relations Committee, vowed to press ahead with legislation gaining bipartisan support to give Congress the ability to vote on any deal.

[The deal is also opposed by Saudi Arabia and all Sunni Arab states, which consider Iran, the leading Shi’ite Muslim country, to be a threat to them.]

Several of the restrictions in the deal apply to Iran’s enrichment of uranium, a core concern because the material can be used in a nuclear warhead.

Under the agreement, Iran would slash its centrifuges by two-thirds, to about 6,000, convert a once secret underground nuclear facility at Fordow to a “nuclear, physics, technology, research center” for 15 years, and “redesign” a heavy water reactor in Arak that can now process weapons-grade plutonium to “peaceful nuclear research.”

Iran would also ship spent fuel out of the country, reduce its uranium stockpile, and agree to numerous inspections meant to ensure it doesn’t cheat.

Zarif earlier lauded the deal at a press conference in Lausanne. “None of those measures includes closing any of our [nuclear] facilities. The proud people of Iran would never accept that,” he said.

[An Israeli government official, speaking from Jerusalem on condition of anonymity, said the following about the deal:

The framework gives Iran’s nuclear program, the sole purpose of which is to produce nuclear bombs, international legitimacy.

Iran will still have extensive nuclear capabilities. It will continue to enrich uranium. It will continue its centrifuge research and development. It will not close even one of its nuclear facilities, including the underground facility at Fordo. This and more.

The bottom line is that this deal ensures the full removal of the sanctions against Iran’s nuclear program while assuring that it will keep its nuclear capabilities.

There is no demand that Iran stop its aggression in the region, its terrorism around the world or its threats to destroy Israel, which it has repeated again over the past several days.

He concluded by saying:

The alternative to a bad deal is not war but rather a different deal, one that will significantly dismantle Iran’s nuclear infrastructure and will require Iran to stop its aggression and terrorism in the region and around the world.”]

Note to students: Before answering the questions, read the “Background” below.

1. Describe the deal the U.S. and international negotiators reached with Iran on Thursday. Be specific.

2. List the negative results Israeli Prime Minister Benjamin Netanyahu said would be the outcome if this deal is finalized as it now stands.

3. What threats did Prime Minister Netanyahu point out that back up his assertions?

4. How did President Obama defend the agreement that was made?

5. What accusation did Iran’s negotiator Foreign Minister Javad Zarif make an hour after President Obama made his remarks?

6. In addition to Israeli officials, Republicans and some Democrats in Congress, who opposes the deal made with Iran?

7. Ask a parent: what confidence do you have that the Obama administration has made a good deal?