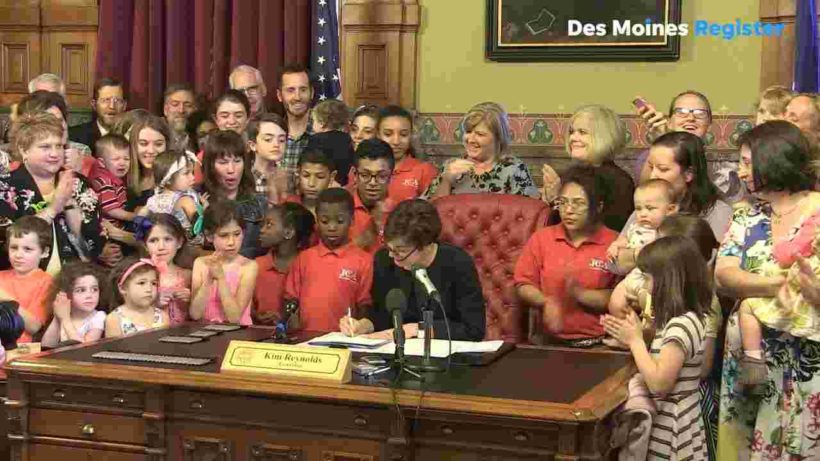 The legislation does make some exceptions for pregnancies conceived through rape or incest, as well as fetal abnormality, or if a doctor determines that a woman’s life is in danger.

It would also ban all persons from knowingly acquiring, providing, transferring, or using fetal remains in Iowa. This would not apply to medical diagnostic samples, or forensic investigations, or to fetal body parts donated for medical research after a miscarriage or stillbirth.

Previously, abortion was legal in Iowa until the 20th week of pregnancy. The new law is the strongest abortion regulation in the country [but is just the latest battleground in the fight over access to abortions].

The Iowa bill passed through Iowa’s House of Representatives on Tuesday by a vote of 51-46, and passed the Senate on Wednesday by a vote of 27-19. The bill has been significantly controversial in the state, and there have been many protests.

In a statement published on the governor’s website, Reynolds said she signed the bill as she felt it was “immoral to stop an innocent beating heart,” as well as “sickening to sell fetal body parts.”

“I believe that all innocent life is precious and sacred, and as governor, I pledged to do everything in my power to protect it. That is what I am doing today,” she said. She credited her faith as the force that “leads her to protect every Iowan, no matter how small.”

The law will most certainly be challenged in court, and is unlikely to go into effect without approval from the Supreme Court. Acknowledging this, Reynolds said that her actions on Friday were “bigger than just a law,” and that she will not be backing down.

Planned Parenthood and the ACLU promised a lawsuit against Reynolds before she signed the bill, criticizing the governor for signing a bill they say is “so clearly unconstitutional.”

If this bill is taken to the Supreme Court, it could potentially force the justices to reconsider the 1973 Roe v. Wade decision that established a constitutional right to abortion.  *******

Jeanne Mancini, president of March for Life, praised the law, saying it “will not only save lives, it also reminds us that abortion stops a beating heart.”

“We thank Iowa for recognizing that every life is a gift and that personhood has inherent dignity from the moment of conception,” she said.

[Note: Several other states have passed laws placing restrictions on abortions: Mississippi’s Republican governor in March signed into law a bill banning abortion after 15 weeks with some exceptions, sparking an immediate court challenge by abortion rights advocates. A similar court challenge is under way in Kentucky, which in April enacted a ban on a specific type of abortion procedure from the 11th week of pregnancy. Similar laws restricting abortions in other states including Alabama, Arkansas, Kansas and Oklahoma have been struck down by courts.] Reprinted here for educational purposes only. May not be reproduced on other websites without permission from Catholic News Agency (CNA).

3. a) What provision is included in the bill relating to the use of fetal remains (or: baby body parts – depending on your view of an unborn child / fetus)?
b) What exception is there to this provision?

4. Why did Republican Governor Kim Reynolds sign the bill?

5. What organizations are fighting this bill, as well as similar laws recently passed in other states that place restrictions on abortions?

Watch a report from the Des Moines Reporter: