Indonesia Is All Over This Problem Like White on Rice

(by Eric Bellman, The Wall Street Journal, WSJ.com) JAKARTA – As governments across the globe scramble for ways to contain surging food prices, Indonesia has one of the most unusual [solutions]: persuading its rice-loving population to stop eating its favorite food.

Citizens of this giant Southeast Asian nation [eat] more rice than almost any other country. With annual per-person consumption of more than 275 pounds, Indonesians [eat] more than 15 times as much rice as Americans eat, and twice what the average Japanese consumes. Many Indonesian meals feature rice as the main course, with meat and vegetables on the side. …

“We are too dependent on rice,” says Bayu Krisnamurthi, Indonesia’s vice minister of agriculture. “The price is going up, so the less we are depending on the international market, the better.” Indonesia is hoping to slash average rice consumption by more than 10% over the next four years.

So far, it has launched a “One Day, No Rice” campaign, which has First Lady Ani Bambang Yudhoyono on posters asking people to pick a day not to eat rice. The government has also started a program to subsidize thousands of villages to grow more fruits and vegetables.

It’s encouraging companies to make more foods that use cassava, [a tropical plant with thick roots that are used to make small white grains (called tapioca) that are used in cooking] whose price is also rising, and sweet potatoes. Chefs have been commissioned to re-engineer traditional foods to use other ingredients. A village named Cireundeu in Java, for example, is being commended for its “cassava rice,” a local process that shreds cassava so it can be cooked and eaten like rice.

The Department of Agriculture even produced an educational television series as part of the effort. The miniature soap operas, set in villages, tell people about the benefits of switching to cassava, sweet potatoes, corn and sago, which comes from the stem of palms.

For decades, Indonesia has struggled to achieve and maintain self-sufficiency in rice. It banned rice imports in 2006 to ensure farmers weren’t hurt by cheap imports. Still, as global grain prices climbed this year, Indonesia surprised the market by announcing plans to boost government imports as well as the country’s rice stock.

Other than controlling imports and trying to expand rice cultivation, though, the government has few ways to address food insecurities. That leaves [reducing] consumption as the only choice.

Indonesians are still stuck on their staple, though. Cassava, for one, is sometimes seen by Indonesia’s middle class as a carbohydrate only the poorest of the poor should have to suffer through.

Radio disc jockey Daud Tobing illustrates what the country is up against. The 21-year-old hosts a hip-hop show on one of Jakarta’s most popular radio stations. He speaks English like a kid from a California suburb and loves fast food. He says he can’t imagine a meal without rice.

He has rice with everything, even spaghetti or a hamburger. He prefers McDonald’s to Burger King because McDonald’s has rice on the menu. (A side of rice is 35 cents, unless you want to supersize it as Mr. Tobing often does, for 25 cents more.) Once, he went to an expensive steak house that didn’t have rice and after stuffing himself with Wagyu beef, he went straight to a roadside stall to have some rice.

“I need rice three times a day-without it I get a headache and dizzy spells,” he says. “It’s like an addiction.” He says no government campaign or even surging prices is going to get between him and his daily fix. “Substituting rice with cassava or sago? It’s not possible.” 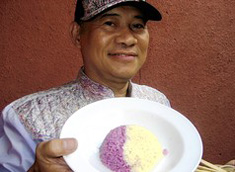 Entrepreneur Adi Kharisma (see photo) says he’s been trying to fight Indonesia’s rice addiction for years through his own business, which offers alternatives such as potato-rice.

He came up with the idea after losing family members and friends to cancer and deciding Indonesians needed more antioxidants in their diets. He launched his company, Sweet Purple, as a food-stand chain selling products made from a local purple sweet potato. He has used the potato to make ice cream, hamburgers, Chinese sweet buns, brownies and even Indonesia’s favorite streetside snack: Chicken satay with rice.

His purple-potato-powered meals are made of up to 50% sweet potato. His special purple rice is 30% sweet potato, 70% rice (see photo).

“Switching people from rice to sweet potato is asking too much so we mix them,” says Mr. Kharisma, who wears purple shirts and asks to be called “Mr. Purple.”

He knows what the government is up against. Sales at his seven stores are slow-so slow, in fact, that he has taken up hypnotherapy to find some way to reprogram people’s eating habits. But his attempts to hypnotize adult consumers into eating better foods have failed, so now he teaches the benefits of healthy foods in grade schools.

The government may eventually get its way and wean people away from piling rice on their plates, some say. But it is likely to happen as more Indonesians make more money and move to cities, which leads to a shift in dietary patterns-and people eat more meat and other grains.  …..

In the meantime, the government has changed its rice-reduction campaign slogan from “One Day, No Rice,” to “One Meal, No Rice.”

-Yayu Yuniar contributed to this article.

1. Why is a sharp increase in the price of rice such a problem in Indonesia?

2. What is the Indonesian government’s plan for dealing with the surging price of rice? Be specific.

3. Why is the government finding its attempts to get people to eat less rice very challenging?

5. How has the Indonesian government scaled back on its original campaign to reduce rice consumption?

6. a) What do you think of the Indonesian government’s attempts to reduce rice consumption in Indonesia?
b) What else could they do to address this problem?

For background on Indonesia, go to the CIA World factbook at cia.gov/library/publications/the-world-factbook/geos/id.html.

Go to worldatlas.com for a map of Indonesia.