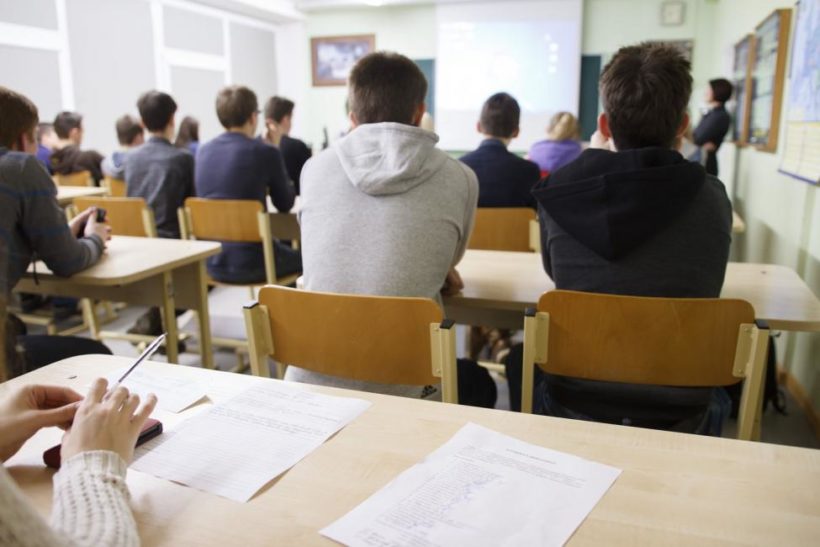 Legislatures in several states have required students to pass tests similar to those given to people seeking to become U.S. citizens. (File Photo Areipa.lt/Shutterstock)

(by Jessie Higgins, UPI) EVANSVILLE, Ind. — Indiana lawmakers are considering a bill that would require all high school students in the state to pass the United States citizenship test to graduate.

This kind of legislation has become a growing trend in states across the country. At least 13 have enacted similar laws since 2015, including Arizona, North Dakota and Kentucky.

The impetus behind the proposed law, some elected officials said, are recent surveys of Americans — especially young Americans — that show a striking lack of knowledge about how the U.S. government functions.

A 2016 study by the University of Pennsylvania, for example, showed that only 26 percent of people could name all three branches of government. And nearly one-third could not name a single branch.

“I think we’re losing out a generation of people,” said Sen. Dennis Kruse, a Republican who drafted the Indiana bill. “We just don’t have people with common knowledge of our government systems anymore — and where we came from.”

Kruse, who is 72, said he remembers civics being an important part of his elementary and high school education. But, at some point, it stopped being taught.

“Somehow, our people today are not getting it,” he said.

… The Joe Foss Institute, and others like it, began pushing for civics education in 2014. And they support bills like the one now before Indiana lawmakers that require students sit for the same test immigrants take to become citizens.

For example, multiple-choice questions ask what Benjamin Franklin is famous for and what two rights in the Declaration of Independence are.

“Our goal is to shine a big bright light on civics and bring it back into schools so it’s taught, funded and tested,” Sparato said. “The citizenship test is a good place to start.”

Published at UPI .com on February 8. Reprinted here for educational purposes only. May not be reproduced on other websites without permission from United Press International.

2. a) For what reason have lawmakers proposed this bill? Be specific.
b) How did the bill’s author, Republican Sen. Dennis Kruse, explain the reason for the proposed bill?

3. How many other states have enacted similar laws in the past several years?

4. What needs to happen for the bill to become law in Indiana?

5. a) Is the study of Civics part of your state’s required social studies curriculum?
b) What is civics?
c) Why do you think it is important to have an informed citizenry?

6. UPI also reports: The Indiana state Democrats said the bill “would do nothing beyond adding to the long list of exams that students already must pass to graduate.” They also expressed concern that it would lower graduation rates for the state.
Do you agree or disagree? Explain your answer. If you agree, what suggestion do you have for schools ensuring that students have a strong understanding of how the U.S. government works?

CHALLENGE:
a) Read the 100 questions people need to know to pass a citizenship test. Is this information that you are already being taught (or have already learned)?
b) Take the sample test under “Background” below. How many answers did you get right?
Challenge a grandparent to take the test also. Compare your scores.

2. Who lived in America before the Europeans arrived?
Canadians
Floridians
no one
American Indians

3. What do we call the first ten amendments to the Constitution?
the Bill of Rights
the inalienable rights
the Articles of Confederation
the Declaration of Independence

4. Under our Constitution, some powers belong to the states. What is one power of the states?
coin or print money
create an army
make treaties
provide schooling and education

5. What did Susan B. Anthony do?
fought for women’s rights
the first woman elected to the House of Representatives
made the first flag of the United States
founded the Red Cross

8. What ocean is on the East Coast of the United States?
Arctic Ocean
Indian Ocean
Pacific Ocean
Atlantic Ocean

13. What are the two major political parties in the United States?
Reform and Green
Democratic-Republican and Whigs
Democratic and Republican
American and Bull-Moose

15. The Federalist Papers supported the passage of the U.S. Constitution. Name one of the writers.
George Washington
James Madison
Thomas Jefferson
John Adams

17. Name the U.S. war between the North and the South.
the Revolutionary War
the War of 1812
World War I
the Civil War

19. If the President can no longer serve, who becomes President?
the President Pro Tempore
the Secretary of State
the Speaker of the House
the Vice President

22. Who is in charge of the executive branch?
the Prime Minister
the Speaker of the House
the Chief Justice
the President

23. What is the name of the national anthem?
God Bless the U.S.A.
My Country Tis of Thee
America the Beautiful
The Star-Spangled Banner

For the “100 Civics Questions and Answers with audio: uscis.gov

From the Joe Foss’ Civics Education Initiative website: “Here Are 12 Facts Every High School Kid In US May Need To Know”

Read a 2011 editorial “Who Cares About American History?”