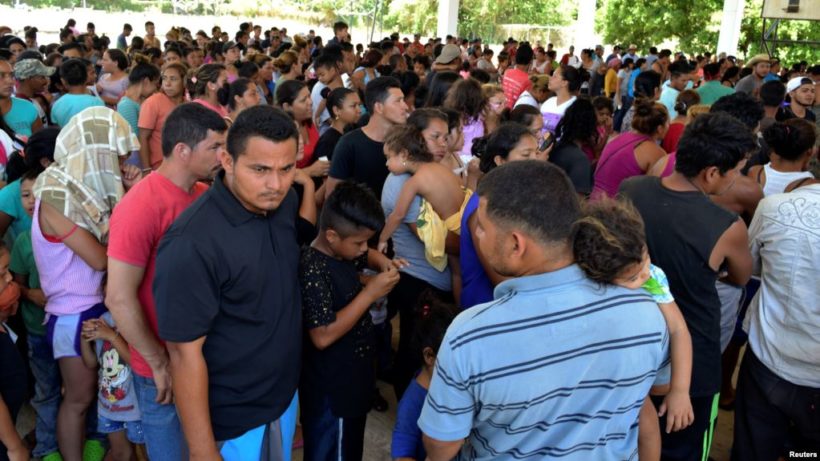 (Compiled from Miami Herald and South Florida Sun Sentinel) – The Trump administration is preparing to move hundreds of migrants from overcrowded camps along the U.S. border to Broward and Palm Beach counties, local officials said Thursday.

Broward County Mayor Mark Bogen and Palm Beach County Sheriff Ric Bradshaw said they were told to expect about two planeloads of migrants each week, starting in about two weeks. The 270 weekly passengers — about 1,000 each month — would be split, with half going to Palm Beach County and half to Broward.

“I asked if there was an end date to this and they said no,” Sheriff Bradshaw said in a news conference Thursday afternoon.

He said the number of migrants his county wants to accommodate is “zero.” Both counties have significant homeless populations and full shelters.

“We’re expecting the creation of a massive homelessness problem,” Mayor Bogen said. “The [Trump] administration is just dropping them off and saying ‘good luck.’ Then they expect our sheriff’s office to be a bus service. We are not a bus service.”

The Miami Herald has not confirmed the impending influx with U.S. Customs and Border Protection (CBP), which directed all inquires to the Department of Homeland Security. DHS directed all questions to CBP. Neither agency answered any questions Thursday afternoon.

It’s still unclear if Broward leaders are referring to just adults or children and their families. Unaccompanied minors will apparently not be a part of the influx, since those populations are managed by the Department of Health and Human Services (HHS).

“This is a humanitarian crisis. We will do everything possible to help these people. If the president will not provide us with financial assistance to house and feed these people, he will be creating a homeless encampment,” Mayor Bogen said in a statement, adding that “a sudden influx of immigrants will further strain Broward County’s social services and will cause further harm to immigrants who will be left here with no money, housing or basic knowledge of the area.”

The county is currently reaching out to local charities, non-profits, and businesses for support.

Bogen said the incoming migrants will be processed at U.S. Customs and Border Protection Offices in the two counties — in Dania Beach and West Palm Beach. He called the idea “irresponsible” and said, “I would suggest that we bring them to the Trump hotels and ask the president to open his heart and home as well.”

Senator Marco Rubio said he was told by local law enforcement that once processed, they will be released into the community pending an asylum hearing.

Palm Beach County Mayor Mack Bernard said the responsibility of caring for migrant families should not be shifted to South Florida communities.

“If so many people are coming to Palm Beach County we may have to declare a national emergency because they will spread us thin,” Bernard said, noting that the city is already wrestling with its own homelessness problem. “The burden that will affect us will be humongous, specifically our school system. We are not a border state. We are the state of Florida.”

Of the three South Florida counties, Miami-Dade is the only one excluded from the announced flights.

On April 12, President Trump had tweeted:

“Due to the fact that Democrats are unwilling to change our very dangerous immigration laws, we are indeed, as reported, giving strong considerations to placing Illegal Immigrants in Sanctuary Cities only. The Radical Left always seems to have an Open Borders, Open Arms policy – so this should make them very happy!”

Only Miami-Dade complied with Trump’s calls for an end to sanctuary policies for undocumented immigrants. Days after Trump took office, Miami-Dade Mayor Carlos Gimenez ordered local jails to resume accepting detainer requests from immigration officers. The requests apply to people booked at a jail on an unrelated local charge who are also being sought by immigration agents for potential deportation. The detainer requests ask local law enforcement to incarcerate the person an additional 48 hours in order to give ICE agents a chance to take the person into custody.

At the end of April, the president confirmed media reports that his administration would send immigration offenders from the border to sanctuary jurisdictions.

“Last month alone, 100,000 illegal immigrants arrived at our borders, placing a massive strain on communities and schools and hospitals and public resources like nobody’s ever seen before,” Trump said at an April 29 campaign rally in Green Bay, Wis. “Now we’re sending many of them to sanctuary cities…They’re not too happy about it….what did they say? ‘We want them.’ I said: ‘We’ll give them to you. Thank you.’ They said, ‘We don’t want them.’ ”

On Monday, U.S. Customs and Border Protection announced it [would be] flying migrants to less crowded locations for processing. According to the AP, U.S. Immigration and Customs Enforcement manages the flights at a cost of $6,000 each.

Compiled from articles at miamiherald .com by Monique O. Madan and Douglas Hanks and by Brittany Walllman at South Florida Sun Sentinel. Reprinted here for educational purposes only. May not be reproduced on other websites without permission.

2. How many illegal immigrants will the Trump administration move to Broward and Palm Beach Counties from the U.S. southern border?

3. What complaint/criticism does Broward County Mayor Mark Bogen have about the news? Be specific.

4. What did Palm Beach County Mayor Mack Bernard say about moving 500 illegal immigrants a month into his county?

5. What should be done with the 100,000 people who crossed the border illegally in April? What about the 100,000 detained in March?  Where should the hundreds of thousands of people be released?

6. There are 1.5 million people in Palm Beach County – and close to 2 million in Broward County. The mayors of both say adding 6,000 illegal immigrants per year to each county will overwhelm their systems.

This is a small scale compared to what is happening in border towns.

Florida Mayor Bogen said in a statement that “a sudden influx of immigrants will further strain Broward County’s social services and will cause further harm to immigrants who will be left here with no money, housing or basic knowledge of the area.”

Similarly, our border agents are not equipped to handle/house tens of thousands of people coming across the border monthly, many with children.

President Trump has been sounding the alarm that the border situation is a crisis. He has considered declaring a national emergency. He has been calling on Congress to strengthen our immigration laws and our asylum requirements.

Undocumented immigrants are being told what to say to falsely obtain asylum in the U.S. This hurts people with legitimate claims.

a) The combined population of the three countries from which the majority of migrants are coming (Guatemala, Honduras and El Salvador) is 31.9 million. Those illegally entering the U.S. say there are no jobs in their countries and the cities are full of gangs. If this is true, should we allow 31 million people to come to the U.S. and be granted asylum? Explain your answer.

b) Many in the media suggest President Trump is being vindictive to send illegal immigrants to Democrat controlled cities that support sanctuary policies. Do you think this is true, or do you think the president is trying to prove a larger point? Explain your answer.

OPTIONAL:  Write to your Senators and Representative to express your support for, or opposition to President Trump’s position on the border crisis.  Remember to be clear, concise and polite.