How the U.S. is using terrorists’ smartphones and laptops to defeat them 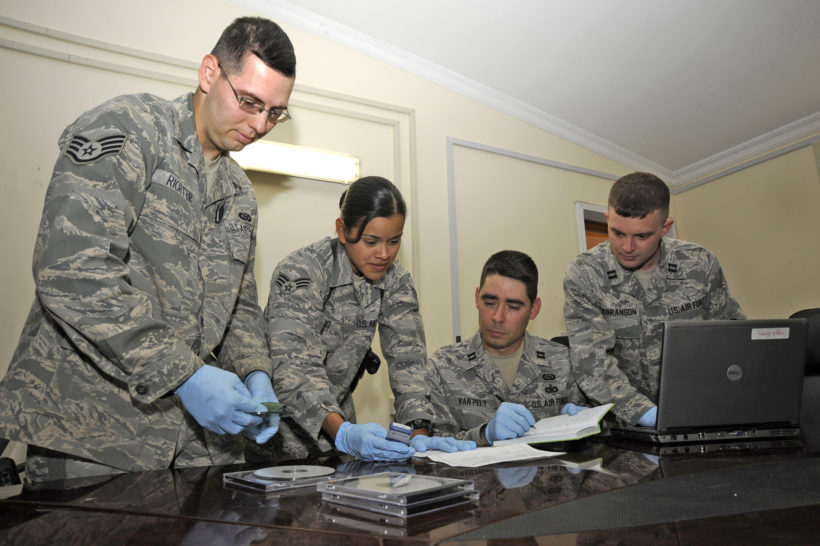 In a nondescript, highly secured building in this Washington suburb, a group of U.S. government technicians and linguists are downloading massive amounts of data from phones, hard drives, CDs and other devices, providing a huge boost to the U.S. intelligence community as it hunts terrorists.

Many of the devices have been captured from battlefields in Iraq and Syria, where the Islamic State has lost virtually all the territory it captured in 2014.

“This is the future,” Kolleen Yacoub, director of the National Media Exploitation Center, told USA TODAY in a rare interview at the center’s headquarters.

It was the first time the center, which also supports law enforcement and other agencies, has allowed a journalist into the facility, providing insight into a critical but little known part of the intelligence community.

The center grew from a handful of employees when it was established in 2003 to about 700 today, including offices overseas. It has about 100 linguists.

“The ability to exploit captured electronic hardware is a great capability that we have adopted and expanded and improved tremendously over the past 15 years,” said Jim Howcroft, a retired Marine intelligence officer and director of the terrorism program at the George C. Marshall European Center for Security Studies.

But it is the proliferation of laptops and cellphones that has fueled the growth in this type of intelligence gathering.

“What they’re saving on their devices is ground truth,” Yacoub said. “We tend to treat our digital devices, our mobile devices … as personal items and we don’t lie to them.”

“The adversaries don’t lie to them either,” she said.

The data include videos and photos that help identify militants and their leaders.

Even when a device is damaged or information is deleted, the center’s technicians recover 60% to 80% of the data. “Deleted does not mean lost” is one of the center’s mottoes.

The amount of data coming into the center has skyrocketed in the past two years, Yacoub said, mainly because of the campaign against the Islamic State, or ISIS.

The data analysis has been particularly helpful in giving intelligence analysts an unprecedented look at how the radical group operated in Iraq and Syria because of the ubiquity of smartphones and the meticulous way ISIS kept records in areas it controlled.

The data include tens of thousands of personnel records on foreign fighters and their families with dates of birth, aliases, phone numbers, jobs and other valuable intelligence.

“They have their own central government in a sense,” Yacoub said.

ISIS had departments that developed drone technology, chemical weapons, finance and propaganda operations. It also kept detailed records on the bureaucracy it created to provide services in areas it controlled.

Some of the terror leaders have been captured fleeing the battlefield with reams of information in the hopes that they can use it to keep the group active or to regroup after the loss of territory.

“If you’re committed to sustaining this organization and you’re going to take your show on the road … then you’re taking everything you can with you,” Marine Brig. Gen. James Glynn, deputy commanding general of the Special Operations Joint Task Force, said in an interview from Baghdad.

The intelligence is helping analysts map out how the Islamic State may try to evolve.

“If you don’t have a clear understanding of how ISIS is operating today, I don’t think you can really understand where they are going to next,” said Seth Jones, director of the Transnational Threat Project at the Center for Strategic and International Studies. “They are not going to disappear.”

Reprinted here for educational purposes only. May not be reproduced on other websites without permission from USA Today.

1. What is the National Media Exploitation Center? Be specific.

2. What do the technicians and the linguists at the National Media Exploitation Center do?

3. Where did the center obtain the smart phones, hard drives and other devices they are analyzing?

4. What type of critical information are the technicians and linguists at the center retrieving?

5. How is U.S. intel using the information they recover at the Center?

6. How does this news story inspire you?