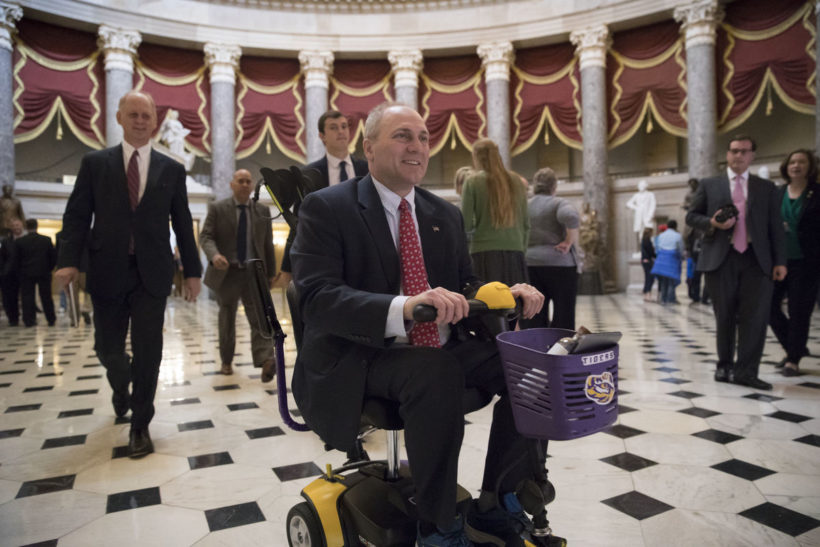 House Majority Whip Steve Scalise, R-La., makes his way to the chamber on a motorized scooter for the vote on the $4 trillion budget measure that will pave the way for a sweeping GOP tax overhaul, on Capitol Hill in Washington, Thursday, Oct. 26, 2017. Scalise was critically wounded in a shooting earlier this year by a gunman targeting Republicans at a congressional baseball practice. (AP Photo/J.Scott Applewhite)

(by Marisa Schultz, New York Post) WASHINGTON — House Republicans on Thursday narrowly passed the Senate’s $4 trillion budget proposal, despite grumblings about the impact on the deficit and the elimination of state and local tax deductions.

Even with 20 Republicans joining all Democrats in voting no, the budget passed 216-212.

The House had already passed its own budget that directed upcoming tax reform legislation to be deficit-neutral. (The House budget called for tax cuts that would not add to the federal deficit, which the Senate’s bill will to do. The House version coupled the tax cuts with $200 billion in spending cuts over 10-years.) But to speed up the process toward their ultimate goal of tax cuts, the House (gave up the spending cuts they wanted and) passed the Senate plan that would allow tax cuts to add $1.5 trillion to the deficit.

“By passing this budget today, we can send a clear message to the American people: Real tax reform is on the way,” said Ways and Means Committee Chairman Kevin Brady (R-Texas).

The budget vote opened a process called reconciliation* that will allow the upcoming tax reform legislation to pass the Senate with a simple majority vote — and without any Democrats. (*Reconciliation is a legislative process that allows expedited passage of certain budgetary legislation on spending, revenues [taxes], and the federal debt limit with a simple majority vote in both the House (218 votes) and Senate (51 votes).)

Democrats blasted the plan as “the billionaires’ budget” that will roll back Medicaid and Medicare spending to deliver tax relief to the wealthiest Americans. …

Rep. Diane Black (R-Tenn.) said Democrats shouldn’t make assumptions about a tax plan that hasn’t even been written yet. …

Republicans and President Trump believe they can deliver a massive tax cut to Americans and businesses this year that will create economic growth and deliver relief to the middle class.

One major sticking point is how to pay for those tax cuts. The current plan would eliminate the deductibility of state and local taxes to save about $1.3 trillion over the decade. (Lammakers from high-tax states were upset about this elimination and mostly voted “no” on the budget.)

More than 44 million people rely on those deductions, especially in high-taxes states like New York, New Jersey and California.

Rep. Faso said he couldn’t support “a budget resolution that singled out for elimination the ability of New York families to deduct state and local taxes.”

(Republicans will move quickly to the tax measure in hopes of passing it into law this year. House and Senate leaders want to pass companion measures before Thanksgiving with a final compromise coming before year’s end. Congressman Brady said immediately after the vote that he’ll release the tax measure on Nov. 1 and that a panel vote is expected the week of Nov. 6.)

NOTE: There will be no new posts next week (the week of October 30) as we must dedicate our full attention to fundraising. Regular posting will resume November 7. Please see note at top of “Answers” emails for more.

2. What was the outcome of the final vote?

3. a) How was the Senate plan different from the House’s budget proposal?
b) Why did the House pass the Senate’s budget?

5. When will the House release the proposed tax reform bill? When do Republicans aim to pass the final bill?

CHALLENGE – on upcoming tax reform – Watch Mick Mulvaney, Director of the Office of Management and Budget (OMB), explain the reason for eliminating state and local tax deductions (see videos under “Resources” below). What do you think?

For information on “How a Bill Becomes a Law,” click here. Put the steps in order here.