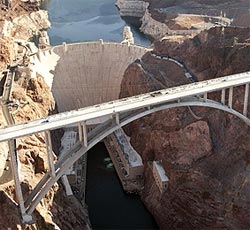 (by Sean Holstege of The Arizona Republic, adapted by USAToday.com) – …When the Mike O’Callaghan-Pat Tillman Memorial Bridge opens to traffic later this week, it is expected to become an instant tourist attraction while providing a quicker, safer drive between Phoenix and Las Vegas.

The Hoover Dam bypass bridge is [the following]:

But what sets the bridge apart most of all is the setting.

It is [built] 890 feet above the … Colorado River, wedged between rock cliffs that form Black Canyon, with commanding views of Hoover Dam and Lake Mead.

The four-lane bridge near Boulder City, Nev., was dedicated Thursday, just two weeks after the 75th anniversary of the dam’s opening ceremony. …

The first study recommending a bypass was written in 1968, and over the years, 27 more studies followed. Yet it wasn’t until March 2001 that the Federal Highway Administration approved the plan.

Full funding would materialize only after Arizona, Nevada and various federal agencies agreed to split the cost. …

The terrorist attacks in September [2001] quickly made it clear that Hoover Dam wasn’t just a traffic bottleneck and safety hazard but also a target.

Commercial traffic was immediately [permanently] banned from U.S. 93 across Hoover Dam, forcing [commercial vehicles to take] a 75-mile detour. The urgency to build the bridge accelerated.

The bridge and the new stretches of U.S. 93 leading to it will open to traffic this week. Combined, the projects came in within the $240 million budget. …..

Congress had designated the name of the bridge in a 2004 transportation bill. It honors two people from the states that the bridge connects. Pat Tillman is the Arizona Cardinals linebacker who joined the U.S. Army after the Sept. 11, 2001, attacks and was killed by friendly fire during combat in Afghanistan. Mike O’Callaghan was a two-term Nevada governor and decorated Korean War veteran.

A public celebration was held Saturday.

Denver resident Mike Capps, 64, has relatives in Kingman, Ariz., and visits them often. “We’ve been watching this bridge being built for the last eight years,” he said. “We made the trip just for this. Just to be a part of it.”

Views from cars crossing the dam will be partly obscured by a barrier. But pedestrians are allowed to cross on the upstream side. From there, they can look straight down through the railing at the rocks and river far below.

They also get a new perspective on the dam.

Studies from 2001 showed a motorist will save an average of 17 minutes when crossing from one side of the canyon to the other. On busy holiday weekends, the time savings could be more because the bridge eliminates tourist travel congestion and security checkpoints that have caused two-hour delays at the dam. …..

As the bridge [was being built], the 1,200 workers and 300 engineers on the project found inspiration a quarter-mile upstream.

“If any one of us had a day when we felt tired or rundown or in doubt, working in the shadow of that dam really helped,” project manager Dave Zanetell said.

“Hoover Dam was the greatest engineering accomplishment in our nation’s history,” he said. “We had an opportunity to be as great for our generation.”

Reprinted here for educational purposes only. May not be reproduced on other websites without permission from USA Today. Visit the website at usatoday.com.

1. For what purpose was the Hoover Dam bypass Bridge built?

3. What was significant about the date of the bypass bridge dedication?

4. Studies recommending that a bypass bridge be built have been done since 1968. When was the plan for the bypass bridge approved by the Federal Highway Administration?

5. What is the official name of the bypass bridge? Explain.

Go to AZ Central’s website for “Illustrated time-lapse: 41-second animation shows how the bridge was assembled” and other photos and videos of the bridge building and dedication. (Scroll down for video links.)