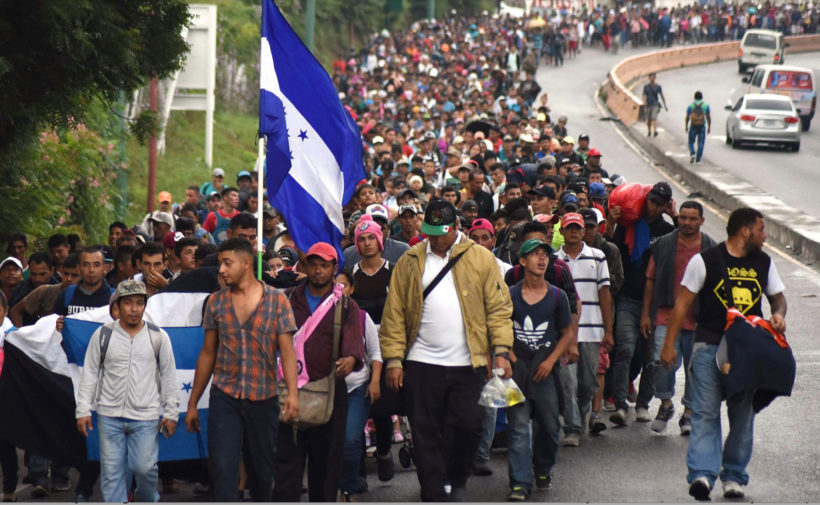 Hondurans walk towards the United States in Chiquimula, Guatemala on Oct. 17, 2018. A caravan set out on Oct. 13 and was headed north on the journey through Guatemala and Mexico to the U.S. border and plan to enter the country illegally. (Orlando Estrada / NBC News / AFP - Getty Images)

(Compiled from reports by Sonia Perez D., Associated Press in CHIQUIMULA, Guatemala and by Doina Chiacu and Jorge Cabrera, Reuters in ESQUIPULAS, Guatemala) — U.S. President Donald Trump threatened Tuesday to cut aid to three Central American nations if they let people travel to the U.S. illegally, reacting to a caravan of some 3,000 migrants advancing through Guatemala with hopes of reaching the U.S. border. [The group left Honduras Friday, just days after Secretary of State Mike Pompeo warned South American citizens against crossing into the U.S.]

Late Tuesday, Trump said via Twitter that the U.S. had conveyed the same message to the governments of Honduras, Guatemala and El Salvador, telling them that U.S. aid will stop if they allow migrants to travel from or across their countries with the intent of entering the United States without permission.

“Anybody entering the United States illegally will be arrested and detained, prior to being sent back to their country!” he added. “We have today informed the countries of Honduras, Guatemala and El Salvador that if they allow their citizens, or others, to journey through their borders and up to the United States, with the intention of entering our country illegally, all payments made to them will STOP (END)!” he said.

The group’s numbers have snowballed since about 160 migrants departed Friday from the Honduran city of San Pedro Sula, with many people joining spontaneously carrying just a few belongings.

Earlier Tuesday, Trump had [issued a warning to] Honduras. However, the Central American nation’s ability to do anything appeared limited as the migrants already crossed into Guatemala on Monday, twice pushing past outnumbered police sent to stop them — first at the border and then at a roadblock outside Esquipulas. The Honduran Foreign Ministry called on its citizens not to join the group. In a statement, it accused unidentified “political sectors” of organizing the caravan with “false promises” of a transit visa through Mexico and the opportunity to seek asylum in the United States.

It urged the migrants not to let themselves “be used by a movement that is obviously political and seeks to upset governability, stability and peace in Honduras and the United States.”

Honduran president Juan Orlando Hernandez said in a public address on Tuesday evening some Hondurans in the caravan had already returned home and the government was preparing to support them. He did not specify how many had turned back.

Over the border, Guatemalan police officers detained Bartolo Fuentes, a former Honduran lawmaker, from the middle of the large crowd that he and three other organizers had led from San Pedro Sula, Honduras, since Saturday. [Fuentes is the ex-deputy of the leftist Honduran Liberty and Refoundation Party. Their members are supporters of the former Honduran President that was ousted by the military in a coup back in 2009.  The party wanted to form a partnership with both Hugo Chavez and the Castros to create some kind of South American Communist mega alliance.]

The Honduran security ministry said Fuentes had been detained because he “did not comply with Guatemalan immigration rules” and would be deported back to Honduras in the coming hours.

Security officials at the Honduran border with Guatemala in Agua Caliente blocked the road to prevent another much smaller group from getting through.

Guatemala’s government said it did not have official figures for how many migrants from the caravan had already crossed the border.

Meanwhile, Mexico’s immigration authority sent out a fresh warning late Monday that only those who meet entry requirements would be allowed into the country and each migrant would have to satisfy Mexican migration agents. Hondurans need visas to visit Mexico in most cases. Adult citizens of Guatemala, Honduras, El Salvador and Nicaragua need only present national identity cards to cross each others’ borders. That rule does not apply when they reach Mexico.

Still, it remains unclear if Mexico and other governments in the region — many of whose own people are migrants — have the political will to physically halt the determined border-crossers, who are fleeing widespread poverty and violence in one of the world’s most murderous countries.

“In Honduras there are no jobs, and the jobs that do exist aren’t enough to live on,” said Jose Francisco Hernandez, a 32-year-old from Copan state in western Honduras. “We can’t go to the city because it is full of gang members, and that is hurting us. We decided to migrate from the country to see if we can find a better life.”

Last week, U.S. Vice President Mike Pence urged leaders in Honduras, El Salvador and Guatemala to persuade their citizens to stay home and avoid the long, risky journey to the United States. Pence told leaders that the United States was willing to help with economic development and investment if they did more to tackle mass migration, corruption and gang violence.

On Tuesday, Pence tweeted that he had spoken with Honduran President Juan Orlando Hernandez.

“Delivered strong message from @POTUS: no more aid if caravan is not stopped. Told him U.S. will not tolerate this blatant disregard for our border & sovereignty.”

In the evening, Pence tweeted that that he had spoken with Guatemalan President Jimmy Morales and “made clear our borders & sovereignty must be maintained. We expect our partners to do all they can to assist & appreciate their support. Reiterated @POTUS’ message: no more aid if it’s not stopped!”

Since 2014, the United States has committed $2.6 billion in aid for Honduras, Guatemala and El Salvador. For 2019, Washington has earmarked $65.7 million in aid to Honduras for security, democracy building, human rights and economic and social development programs.

Compiled from articles at Associated Press and Reuters. Reprinted here for educational purposes only. May not be reproduced on other websites without permission

2. a) Name the countries the President was referring to in his warning.
b) What led up to President Trump’s warning?

3. a) For what reasons are people trying to come to the U.S. illegally from these three countries?
b) What is the total population of these three countries?
c) Everyone has empathy for the plight of the people trying to reach the U.S. News reports are full of anecdotal stories about real people and the hardships and danger in their own countries that motivated them to try going to the U.S. But what is a lasting solution? – Should there be U.S. immigration laws or limits on the number of people who can move here? Allow anyone who wants to come here to do so? How many millions? Please explain your answer.

4. a) Who is Bartolo Fuentes?
b) Why do you think as a lawmaker in Honduras Mr. Fuentes did nothing to improve the safety and economy in the country, and instead says the best way to help people is to lead them into the U.S.?

5. What is Mexico’s policy on the citizens of neighboring countries entering Mexico?

6. a) How much U.S. taxpayer money has the U.S. given to the three countries in the past 4 years?
b) What responsibility do the governments of these countries have to establish law and order and improve their own economies? (Some of them say promised U.S. business investment has not materialized. What should those leaders do to persuade U.S. companies to invest there?)
c) The leaders of these countries ignored Vice President Pence when he “urged” leaders to persuade their citizens not to make the long, risky journey to the U.S. Do you think they believe President Trump’s threats? Explain your answer.

7. Watch the videos under “Resources” below. Are you more or less likely to agree or disagree with President Trump’s policy on the migrants? Explain your answer.