Homeless Man with ‘Golden Radio Voice’ Gets His Chance 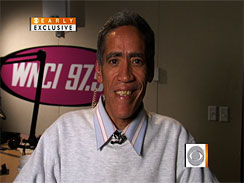 (by Phil Helsel, NYPost.com) – The homeless man with the “golden radio voice” wanted a second chance — and did he ever get it.

As soon as Ted Williams, a panhandler who became an online hit after video of him begging on an Ohio roadside was posted to the Internet, appeared on a local radio show this morning the offers began pouring in — including a dream job with the Cleveland Cavaliers and a free house. (photo of Mr. Williams, right, at the radio station courtesy of CBS Early Show)

“The Cleveland Cavaliers just offered me a full-time job and a house! A house! A house!,” repeated a stunned Williams, 71, on local radio station WNCI.

A caller to the show who said she represented the Cavs offered Williams, who shot to stardom after local newspaper the Columbus Dispatch on Monday posted video of his perfectly-pitched panhandling, a full-time job doing voiceover work for the team and parent company and a free home in Cleveland.

The Bedford-Stuyvesant, Brooklyn, native trained to be a radio announcer before drugs and alcohol ruined his chances at a career, and he was reduced to begging on the side of a road in Columbus, Ohio, before the newspaper found him.

Local police would refer to Williams as “Radio man,” when chasing him from his usual begging spots, where he earned around $30 an hour, Williams said.

“I’ve been out there about a year; I just didn’t know anything like this would ever happen,” an overwhelmed Williams said earlier in the show. “There’s so many words. I’ve already been compared to [Scottish singing sensation] Susan Boyle … I’m just so happy.”

Before the Cavs made their bid, the station said a group of credit unions offered Williams a contract worth up to $10,000; a caller claiming to rep MTV expressed interest in having him guest-announce a show; and callers who said they were the voiceover actors behind plugs for “The Simpsons” and “Entertainment Tonight” said they wanted him to compete on their upcoming “America’s Next Voice” — where the prize includes a home studio.

For a man suddenly thrust from an Ohio roadside into the hearts of the world, Williams set his sights low.

BEFORE answering the questions, watch the video clip of Mr. Williams under “Resources” below after reading the article.

2. How long has Mr. Williams been panhandling in Columbus, Ohio?

3. What has happened as a result of the youtube video of Mr. Williams, and his subsequent appearance on a local radio show this morning?

4. What career did Mr. Williams train for in school?

5. Watch the video under “Resources” below. What does Mr. Williams say led to his homelessness? Why will he avoid getting into the same situation again once he gets back on his feet?

6. What does Mr. Williams want in life now?

7. What can you learn from Mr. Williams’ choices in life?

Watch the video of Ted Williams below: