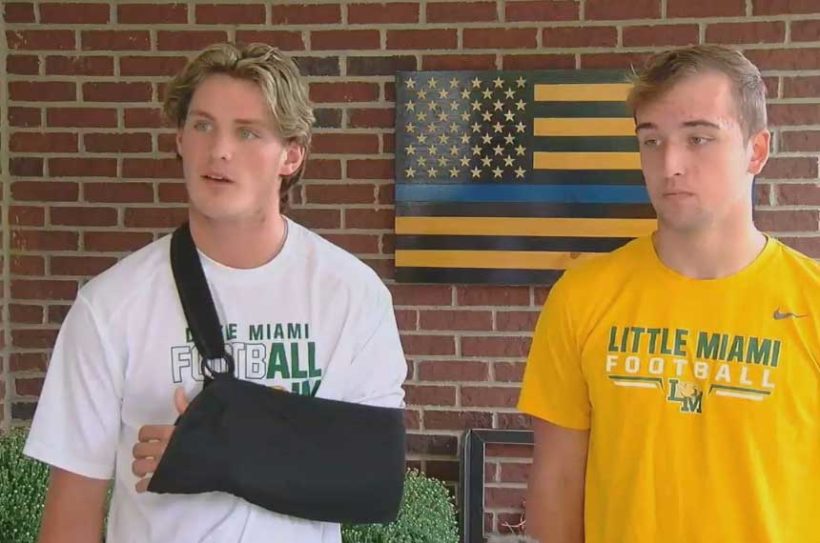 (Compiled from articles at FOX19 NOW, CBS Local12 WKRC, Cincinnati Enquirer, NY Post) —  Two Ohio high school football players were suspended from the team after they ran onto the football field with a thin blue line and thin red line flag before the school’s Patriot Night game on 9/11.

A spokesperson for Little Miami Schools says the players did ask for permission in advance to run with the flags but were told no. As a result, Williams and Bentley heard from the athletic director Monday afternoon and received an indefinite suspension. Local 12 spoke with the superintendent a few hours earlier.

“We can’t have students who decide to do something anyway after they’ve been told that they shouldn’t be doing it,” said schools superintendent Gregory Power.

Power says he saw the flags as symbols of a political point of view and didn’t want to set a precedent.

“We did not want to place ourselves in a circumstance where another family might want a different flag to come out of the tunnel, one that may be [one that] many other families may not agree with from a political perspective,” Power explained.

The school district sent this statement in response to FOX19 NOW:

“Little Miami is saddened to see this story take such a negative turn. While we understand these students’ desire (to) show their support of first responders, they did not obtain permission from district officials. Administrators must act when students break the rules.”

“The Patriot Night program to memorialize the victims of 9/11 was already part of our pre-game ceremonies on Friday and the American flag is the first thing through the tunnel every Friday night. Little Miami enjoys an outstanding relationship with local first police and fire agencies and a Little Miami school resource officer is also a high school football coach.

“Little Miami always has – and always will – support our first responders, our veterans, and all who sacrifice to maintain our freedoms.”

A petition on change .org urging the district to lift the suspension had more than 18,000 signatures Tuesday morning.

“(Jarad) and Brady took a Thin blue and red striped flag out on the field after they were told not to,” the petition said. “The school suspended them indefinitely for supporting their fallen hero’s (sic). Sign this petition to help unsuspend the 2 student-athletes who have lost their senior season.”

When asked by Local 12 news if they were trying to make some kind of a political statement here, Brady Williams, a senior cornerback answered, “No, not at all. I was just doing it to honor the people that lost their lives 19 years ago.“

Williams was holding the Thin Blue Line flag as he rushed onto the field Friday. His father is a police officer, and he says he wanted to honor all the cops who lost their lives trying to save others on 9/11.

“I was all for it,” he said. “Because my dad is a firefighter, and if it had been him killed on 9/11, I would have wanted someone to do it for him.”

Following widespread support for the players, on Tuesday the school reversed the suspensions. School board president Bobbie Grice said,

“The results [of an investigation of the two players’ actions] show that there were no political motivations behind this display of support for first responders on 9/11, but there were stances of insubordination. Moving forward, Little Miami is returning the players to active status and this matter will be addressed as an Athletic Department Code of Conduct issue, with any potential consequences to be handled by coaching staff.”

The story of the two boys has not only struck a nerve in town, but also across this entire country. At one point, the story was getting 1,000 views a minute on Local 12’s website. Now, about a million people have viewed the story.

The school district says the boys could still be disciplined by their coach for insubordination, but they will remain on the team.

Going forward, Grice said the only flags that will come through the tunnel the rest of the season will be the American flag and the Little Miami spirit flag.

2. Why did Williams and Bentley carry the flags, despite being told by school officials they could not do so?

3. Why did school officials bar the players from honoring police and firefighters on 9/11?

4. Why were the players suspended from the team indefinitely?

5. Why did school officials say they were reversing the suspensions?

6. Before his suspension was reversed, Brady Williams said, “I don’t care what my consequences are, as long as my message [support police/firefighters on 9/11] gets across I’ll be happy.”
What do you think?