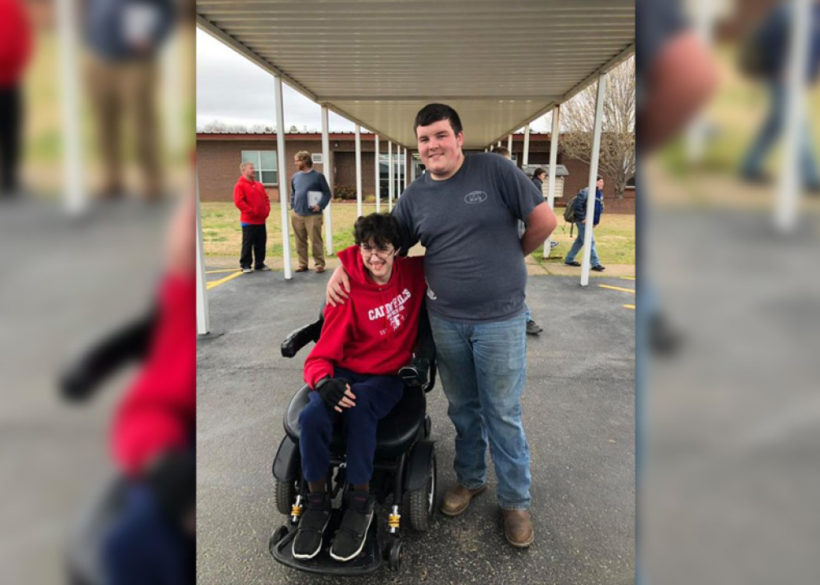 (Compiled from KTHV, NY Post and CNN) –NORMAN, Ark. — Navigating high school just got a little easier for one Montgomery County senior, thanks to his friend who surprised him with a gift he could only dream of.

Roaming the hallways of Caddo Hills High Schools is now one of Brandon Qualls favorite things to do.

“It’s awesome, I may hit a few doors but it’s worth it!” Brandon said.

But getting around was not always this easy for Brandon. For years, he used a manual wheelchair to get to class.

“My arms would get really tired and I would have to stop and take rests,” he said. “It’s been my dream to just have one of these. And my dream came true.”

Brandon’s friend, Tanner Wilson, saved up his own money to buy Brandon his own electric wheelchair. He worked part-time at a local car mechanic shop to save up for the purchase. It took him two years to save enough money. He did not share the price of the wheelchair, but they typically cost several thousand dollars.

Tanner surprised Brandon during class on Feb. 26. Brandon said he was completely shocked when he rolled it in.

“They came in and my face just blew up…crying everywhere…just like ‘Wow, can’t believe he did that for me!’” Brandon said.

“There’s many people out here that have troubles and need a little bit of help. Sometimes they can’t do it for themselves,” Tanner said.

Wilson’s mom, Colleen Carmack, told CNN that her son is grateful that his kind act is getting attention on social media.

“They both deserve the attention because they’re both great and wonderful kids,” Carmack said.

Is she surprised at her son’s behavior? Not at all. “That’s him. He’s always been about everybody else and not himself.”

She said Tanner has “had some bad experiences over the last year, so him being able to help somebody else has really brought him out — being able to know that he made a difference. And I can see a difference in him — like wanting to get out and do more.”

Tanner and Brandon have been friends for years, Carmack said. “They talk about cars a lot and trucks and that kind of stuff. I’m really proud of both of them.”

Tanner said he searched for the right wheelchair for about a year, before finding this one for sale on Facebook.

The chair will remain at school for Qualls until the family can get a car to accommodate the chair.

Compiled from articles at KTHV and by Alexandra Klausner at NYPost .com. and Thom Patterson, CNN. Reprinted here for educational purposes only.

1. What did Arkansas high school student Tanner Wilson do for his friend Brandon Qualls?

3. What was Brandon’s response?

4. Watch the videos under “Resources” below.
a) What 2 adjectives do you think best describe Tanner Wilson? Explain your answer.
b) What inspires you most about Brandon Qualls?

5. Many students raise money for a class trip, their sports team or cheerleading, band, etc. by standing outside a store asking people to donate money, rather than working for it.
Tanner worked (and for a long time) to raise money to buy his friend the wheelchair. He exhibited patience and selflessness.
a) People use the expression “hard work builds character.” Merriam-Webster Dictionary defines character as: the good qualities of a person that usually include moral or emotional strength, honesty, and fairness. How would hard work build character?
b) What do you think about the idea of working to earn money for your cause? (Consider the question regardless of your circumstances – whether you come from an affluent family or one of modest means.)