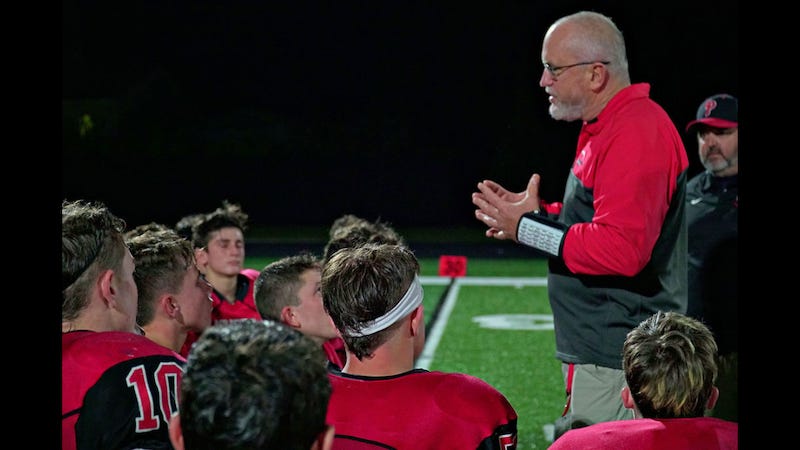 (byJim Baumbach, Newsday) – Plainedge High School football head coach Rob Shaver has been suspended for one game under a Nassau County sportsmanship rule designed to prevent teams from running up the score against opponents.

Shaver is the first varsity coach to be issued the ban under the “lopsided scores policy,” which has been in place for three seasons. He will miss his team’s regular-season finale this weekend against Lynbrook after Nassau’s “lopsided score committee” determined that Shaver kept his top players in the game too long into the fourth quarter during the Red Devils’ 61-13 victory over previously unbeaten South Side on Friday night.

The rule mandates that the coach of a team that wins by more than 42 points must submit in writing the lengths to which they went to avoid running up the score. If the committee determines the coach acted appropriately, there is no suspension.

Shaver, who has a 149-70-1 record in 23 years at Plainedge, said he was not running up the score and doesn’t agree with the committee’s interpretation of the rule.

“They thought it was a mismanaged game, which my opinion is, that isn’t the rule,” Shaver said. “It should be: You ran up the score on purpose. That’s what the intent of the rule is for.”

“What made me the most upset, to be honest is, listen, if the South Side coach complained and said, ‘This guy definitely ran up the score on us,’ well, then they should investigate. Because that’s the intent of the rule. The spirit of the rule is to prevent better teams from running up on lesser programs and sportsmanship and dignity and all that stuff. I get it. That didn’t happen.”

South Side coach Phil Onesto said: “I had no issue with how the game went. I had spoken to coach Shaver, I told him I had no issues.”

…Shaver submitted his explanation in writing on Monday and defended his decision in person to the six-person committee on Tuesday.

Shaver said it was “a highly competitive game” between the top teams in the conference. Both teams were 6-0, with Plainedge ranked No. 1 and South Side ranked No. 4 in Newsday’s Small Schools poll heading into the game. Shaver said he didn’t take his starters out leading by 35 points at the beginning of the fourth quarter because he was worried about giving South Side an opportunity to stage a comeback.

The committee voted unanimously Tuesday to suspend Shaver, according to Matt McLees, the football chairman in Nassau County and one of the committee’s members.

“He expressed his opinion that he did not purposely run up the score and that he’s had frustrations throughout the year that he could have beat teams by 60 points and didn’t,” said Manhasset athletic director Jim Amen, a member of the committee. “The score was 48-13 at the end of the third quarter. I wasn’t there, but I’m not so sure that South Side was going to come back and score one, two, three touchdowns.”

Before the victory over South Side, Plainedge’s three previous wins were all by 42 points. Shaver said his starters played only six plays in one game, 11 in another and were removed with five minutes remaining in the third quarter in the other.

“By leaving the starters in the game in the fourth quarter, was the head coach demonstrating that he’s trying to avoid a lopsided score?” McLees said. “That’s the question the committee had and we didn’t get an answer to that.”

The rule is unprecedented in New York. Todd Nelson, assistant director of New York Sports Public High School Athletic Association, said “to my knowledge” no other sport or county has any rule that penalizes a coach for a lopsided score.

[Next door] Suffolk County leaves it up to the schools to deal with coaches involved in lopsided scores, according to Tom Combs, executive director of Section XI, the governing body of high school sports in the county.

McLees said the rule came about three years ago after superintendents in Nassau County expressed concern over the number of lopsided scores in high school football games. He said there was an average of 22 games decided by more than 40 points from 2014-16, and now there are only a handful per year.

He said the committee suspended a junior varsity coach in 2017 because his team kept blitzing the quarterback during a blowout. He declined to identify that school or coach.

McLees said the committee’s interpretation of the rules has led to more playing time for backups, as opposed to a strict interpretation that would have forced coaches to do anything possible to keep score differentials under 42.

“What we don’t want is to desecrate the game. We don’t want teams taking a knee at midfield or fumbling the ball on purpose to avoid going over 42 points.”

The school district’s Superintendent sent a letter to parents in which he said the team’s coach was “done wrong.”

“The rule is not in place anywhere else in New York, not in Suffolk County, why in Nassau County? Connecticut tried it and realized it was a failed model and eliminated the rule,” said Plainedge Supt. Dr. Edward Salina in a letter.

Published at Newsday .com on October 30, 2019. Reprinted here for educational purposes only. May not be reproduced on other websites without permission from Newsday.

1. What is Nassau County’s lopsided scores policy? What is the purpose of the rule?

3. How did Coach Shaver explain his reason for keeping his starting players in for the whole game?

4. For what reasons did the committee determine the coach violated the lopsided scores policy?

What do you think? Is the rule necessary? Is it unsportsmanlike conduct to run up the score? Was the coach wrong? Is the Athletic Association wrong? Explain your answers.

In the spring of 2017, the Section 8 Superintendent’s Board, Athletic Council, High School Athletic Association, and Football Committee all approved the Lopsided Scores Policy. The Policy states the following:

There is recognition that there is no place for lopsided scores in the sport of football. The Varsity, Junior Varsity, and Modified levels are educational programs designed to encourage safety, participation and sportsmanship. Football scores with a final point differential more than 42 points or more will be defined as lopsided.

As a result of a lopsided score, the head coach and athletic director of the winning team are obligated to fill out the lopsided scores form in the Football Coaches Handbook.

The paperwork is to be submitted to the Football Coordinator on the following Monday after the game by 12PM.

The Football Coordinator will review the form in conjuncture with the Executive Director and Assistant Director.

A decision will be made to either suspend the head football coach for the next game or dismiss the issue if it’s unfounded. If the Athletic Director and Head Coach wish to appeal the suspension they may do so and it will be heard by the Lopsided Scores Committee. (from nassauboces.org Athletic Association handbook)