Helicopters Used to Save Fla. Crop from Rare Chill 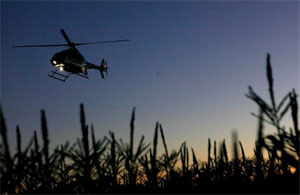 (from YahooNews.com) AP, ST. PETERSBURG, Fla. – Dozens of helicopters are whirring above Florida’s valuable and sensitive veggie crops, an unusual approach by farmers worried that an uncommon freeze could wipe out their harvests.

Farmers are especially nervous because an 11-day freeze in January wiped out many crops, from corn to kumquats. Florida is the largest winter producer of sweet corn in the U.S. – the kind people eat.

John Hundley, a corn, bean and sugar cane farmer in Palm Beach County, said that if winds are too high – as they were expected to be early Tuesday – he won’t be able to hire the helicopters. When asked what he will do to protect his crops, Hundley sighed.

“I can get on my knees and pray right now,” he said. “It looks like it’s pretty much out of our hands.”

The stakes are high: in 2009, the value of production of sweet corn from Florida was $227 million.

“They have hundreds of thousands, millions of dollars in crops,” said Paul Allen, president of the Florida Sweet Corn Exchange.

The helicopters may be the last line of defense if temperatures dip below freezing as expected Tuesday night, though it’s an expensive technique. It costs about $2,500 an hour to fly one helicopter over the crops, and the length of flights depends on a mix of temperatures and wind conditions.

Here’s how it works: The air 50 feet above the crops is warmer than the air near the plants. The helicopter blades push the warm air down and the temperature goes up, said David Sui, a University of Florida expert on vegetables and tropical fruits. The warmer air prevents cold and frost from settling on the plants.

“Even if it raises the temperature a couple of degrees it may save the crops,” he said.

The technique isn’t a new one, as farmers have long hired helicopters to keep their crops from freezing. And growers in California also have used helicopters. …..

Green beans and sweet corn are cultivated in the nutrient-rich muck soil located near the Florida Everglades, though farmers in other parts of the state are also scrambling to protect their fruits and vegetables, many of which are near harvest.

Strawberry farmers are spraying water on the plants, so the heat lost from the crop to the surrounding air is replaced with the heat released as water changes to ice. Citrus farmers are using ground-level heaters to warm the air near tree trunks. And tropical fish farmers are moving their fish or covering the outdoor tanks.

January’s cold snap damaged large swaths of Florida’s crops, including strawberries and tomatoes. Nearly all of the kumquat crop died.

When Florida’s crops die, shoppers pay more at the grocery store because replacement produce is usually imported from outside the U.S.

Already this year, several hundred acres of green beans have been lost.

Gov. Charlie Crist on Sunday declared a state of emergency because of the threat of severe crop damage. That news prompted orange juice futures to rise over concerns the weather would damage this year’s crop.

It’s unusual for temperatures to be this cold this early in the season, said Lisa Lochridge, a spokeswoman for the Florida Fruit and Vegetable Association.

Temperatures are expected to dip into the teens in north Florida, and in the high 20s in central and South Florida – though temperatures between 60 to 78 degrees are more common this time of year.

“When you’re talking about temperatures as cold as those predicted, virtually everything is in peril,” she said.

Copyright ©2010 The Associated Press. All rights reserved. Reprinted here for educational purposes only. The information contained in this AP News report may not be published, broadcast, rewritten, or redistributed without the prior written authority of The Associated Press. Visit news.yahoo.com/s/ap/20101214/ap_on_bi_ge/us_cold_florida_crops for the original post.

1. How are Florida farmers using helicopters to save their vegetable crops? Be specific.

2. What previous weather event is causing farmers to worry more over the crops they’re trying to save now?

3. a) How did farmer John Hundley respond when asked what he would do if he were not able to use helicopters due to high winds?
b) What do you think of his response?

4. How much does it cost to use the helicopters?

5. a) What methods are strawberry and citrus farmers using to save their crops from a freeze?
b) How are tropical fish farmers coping with the unusually cold weather?

6. How will consumers be affected if Florida farmers lose large amounts of their crops?

7. Has this article given you a new appreciation for American farmers? Explain your answer.

Read previous articles on weather affecting crops in the U.S.: