Haley ‘taking names’: Report reveals which nations have America’s back at UN – and which ones don’t 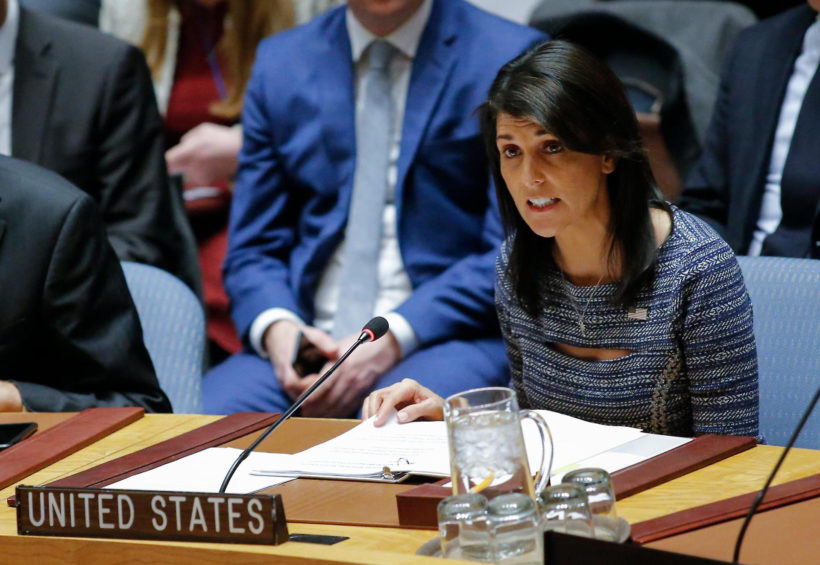 (by Ben Evansky , Fox News) – When Nikki Haley started as U.S. ambassador to the United Nations, she warned she’d be “taking names” of countries that do not have “our back.”

Now, a newly released annual State Department report on voting records at the world body will tell her who exactly is in America’s corner – and who is not.

The report found that U.N. member states only voted with the United States 31 percent of the time last year on resolutions at the U.N. General Assembly – down 10 percent from the prior year.

Reacting to the new report, Haley said in a statement that it was not an “acceptable return” on the United States’ investment and suggested this could factor into aid decisions.

Haley emphasized that U.S. taxpayers pay for 22 percent of the U.N. budget – more, she said, than the next three highest donor nations combined. Haley noted that the U.S. cares more about “being right than popular and are once again standing up for our interests and values” but said:

“Either way, this is not an acceptable return on our investment. When we arrived at the UN last year, we said we would be taking names, and this list of voting records speaks for itself. President Trump wants to ensure that our foreign assistance dollars – the most generous in the world – always serve American interests, and we look forward to helping him see that the American people are no longer taken for granted.”

First published in 1984, “The Report to the Congress on Voting Practices in the United Nations” reviews voting of the 193 members of the U.N. General Assembly (UNGA) and the 15 members of the Security Council, as well as several other items including resolutions related to Israel.

According to the report, the country that voted least with the U.S. was Zimbabwe – having voted zero times with America. According to the United States Agency for International Development (USAID) foreign aid explorer website, Zimbabwe received $58 million in aid for this year.

As the largest contributor to the United Nations, U.S. taxpayers gave $10 billion in 2016 for voluntary and assessed contributions. Voluntary contributions go to fund agencies such as UNICEF and the World Food Program (WFP). Assessed contributions are obligatory payments made by all member states and based on such things as per capita income and population. It funds peacekeeping and the regular budget of the U.N. …..

According to the report, the country that voted most with the United States in the U.N. General Assembly was Israel. The other nine on the top 10 list were U.S. allies Micronesia, Canada, Marshall Islands, Australia, United Kingdom, France, Palau, Ukraine and the Czech Republic.

Asked if the new report could lead to the U.S. cutting funding to the U.N., Stephane Dujarric, the spokesman for U.N. Secretary-General Antonio Guterres, told Fox News that, “Obviously member states vote the way they want to vote. For the Secretary General the engagement of the United States, engagement with the United States at the United Nations is critical, it is very important.” He concluded “that as for the scale of assessment, that’s a member state issue.”

Jonathan Wachtel, a former director of communications for Haley at the U.S. Mission to the U.N., told Fox News that as the United States is the largest contributor and most powerful member of the world body, “it is understandable that frustration arises when Washington’s foreign policy goals come under assault at the institution.”

Wachtel continued, “While it is important for the United States to turn to the U.N. to work with other nations to achieve peace and security in troubled parts of the world, it is wrong for the U.S. to simultaneously turn a blind eye to dismissive practices by irresponsible countries.” It is also wrong, he said, for enemies of the U.S. to use the U.N. to boost their power, manipulate the system to get aid and yet work to compromise U.S. sovereignty. …..

Reprinted here for educational purposes only. May not be reproduced on other websites without permission from Fox News.

1. Who is Nikki Haley? What did she warn UN member countries of when she started her job?

2. a) How many countries are UN members?
b) What percent of the UN budget do U.S. taxpayers contribute?
c) How much money did we contribute in 2016?

3. What did Ms. Haley have to say about the money the U.S. contributes to the UN? (What is the Trump administration’s goal at the UN?)

4. Of the 10 countries that voted the least number of times with the U.S. as noted in the the “Voting Practices in the UN” report which was just released, how many received aid money from the U.S.? How much did each receive?

6. Why shouldn’t the U.S. give money to countries that don’t “have our back”?

USAID (United States Agency for International Development) is an independent agency of the federal government that is primarily responsible for administering civilian foreign aid and development assistance. President John. F. Kennedy created USAID by executive order in 1961 to lead the US government’s international development and humanitarian efforts.

Read the report to Congress “Voting Practices in the United Nations, 2017”

Visit the USAID website for the amount of money the U.S. gives to each country.