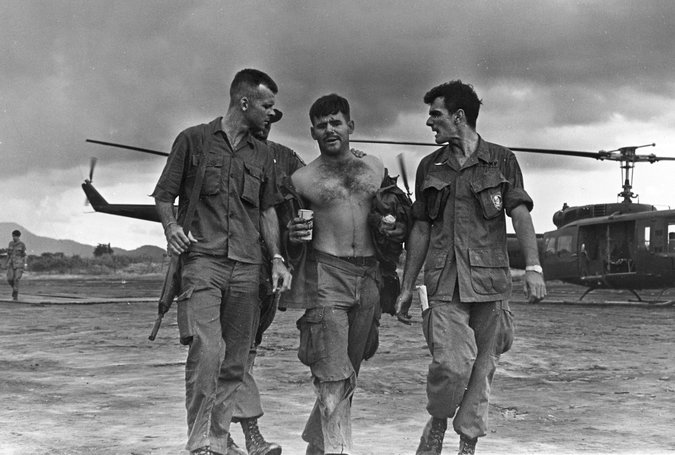 (by David Martin, CBS News) – The nation’s highest military honor was awarded Monday to retired Army Capt. Gary Michael Rose, who goes by Mike, for extraordinary acts of heroism in a secret war.

During the ceremony, President Trump said Rose’s love for fellow soldiers and devotion to the country inspires us all.

Rose was a Green Beret medic in 1970 when he and 15 other Americans were sent on a top-secret mission inside Laos, which helps explain why it took so long to award him the Medal of Honor.

All Rose was told was to bring extra medical supplies. CBS News asked Rose what [he was told] about the mission.

Helicopters carried the Americans and a company of about 120 Montagnard tribesmen (Vietnamese fighters) 50 miles inside Laos.

“We took two casualties going in. And we hit the ground running and it became a running gun battle for the next four days which seemed like one long day,” Rose said.

(No Americans were killed during that four-day battle in Laos, and there were only three fatalities overall. This mission was also a success from an operational standpoint: They came home with a trove of intelligence. “This trove of documents gave MACV [Military Assistance Command Vietnam] its most complete understanding of this [Ho Chi Minh] trail network,” said military historian Eric Villard.) According to the citation*, Rose “continuously exposed himself to intense fire as he fearlessly moved from casualty to casualty.” He is credited with treating 60-70 wounded. (*A citation is a note accompanying an award, describing the reasons for it.)

Rose himself was hit by shrapnel in the foot and showed that the wound was almost a finger-length long.

Rose was on the last chopper out and saved the life of a crewman who had been shot through the neck.

“He was going into shock and I remember leaning down to him and said, ‘Listen, you [son of a gun], if you were going to die, you’d already be dead.’ And he came out of shock,” Rose told CBS News.

Five decades later, Rose accepted the Medal of Honor on behalf of all the soldiers who fought in Laos.

“You just keep putting one foot in front of the other,” Rose said. “That’s what you do. I mean, either that or you, you give up. Are you going to give up?  No, you’re not going to give up. …

(While attending the ceremony at the White House, retired Lt. Col. Eugene McCarley, Rose’s commanding officer during the battle said, “Mike never stopped. I know he never slept. I don’t know that he ever took time to eat because from day one he had his hands full. I can’t think of anyone any more deserving than Mike to receive this award. It’s an effort we pushed and we fought for for many, many years, and finally it looks like it’s coming to pass.”) 1. a) Define classified as used in the article.
b) Why was Captain Rose’s mission classified?

2. List the who, what, where and when of Capt. Rose’s mission.

3. What was the purpose of the mission/what did they accomplish?

4. For what actions did Captain Rose receive the Medal of Honor, according to the citation he received?

5. What is the Medal of Honor? Be specific.

6. Read the “Background” and watch the videos under “Resources” below the questions. How does the story of Captain Rose’s mission inspire you?

Read about the Medal of Honor at history.army.mil.

Read about Capt. Rose’s Medal of Honor at army.mil.

Watch the entire Medal of Honor ceremony at the official WhiteHouse YouTube page.

Watch a brief news report on Capt. Rose and the Medal of Honor ceremony: