(by Andrew Hough, Telegraph.co.uk) – The world’s most expensive military cemetery, a $35 billion center dubbed “The Boneyard”, has been pictured in a spectacular series of new high-resolution Google Earth satellite images.

The 2,600 acre facility, officially known Davis-Monthan Air Force Base, is home to thousands of outdated aeroplanes and helicopters mothballed by the United States Air Force and other allied forces.

The 60 year-old facility, the size of 1,300 football pitches and sprawled across the desert in Tucson, Arizona, houses the 309th Aerospace Maintenance and Regeneration Group (AMARG) and is America’s only storehouse for out-of-service aircraft. 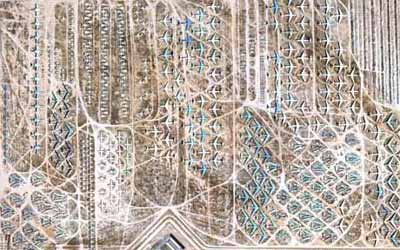 Now for the first time, a series of stunning high resolution satellite images of the four-square-mile facility, nicknamed “the Boneyard”, have been produced by Google Earth.

Commonly used as a final resting place for thousands of decommissioned machines, the centre, originally designed in 1946, is also is used as a spare parts resource for the United States military.

Among cabins, wings and undercarriages are more than 4,200 of the western world’s military aircraft, said to be worth £22.6 billion ($US35 billion) that were at one point in history the most advanced weapons of the air.

Some of the dismantled aircraft include B-52 flying fortresses, F14 Tomcats, seen in the Tom Cruise 80s blockbuster film “Top Gun”, and the A-10 Thunderbolt “tank busters”.

Resident aircraft are either stored long term, dismantled for spare parts, kept in tact for shorter stays or sold off.

Over the past 25 years more than a fifth of the aircraft have been returned to flying status, officials said.

Similar to a large-scale recycling plant, hundreds of staff sift and sort almost 20,000 pieces of junk.

Its landscape has also come to the attention of Hollywood, with several blockbuster movies including Transformers: Revenge of the Fallen, shot there.

Most of the aircraft are vacuum packed in the hope they can be restored and returned to service or sold to other nations.

“309 AMARG does not own the aircraft stored here, they still belong to the delivering military services and government agencies,” said a base spokesman.

“This area was selected for two reasons. The first is Tucson’s dry climate minimises damage caused by corrosion. The second reason was the ground under the site consists of about six inches of dirt topsoil.”

He added: “Beneath that is a claylike sub layer called ‘caliche’. This extremely hard subsoil makes it possible to tow and park the planes in the desert without constructing new parking ramps.”

2.  When was the AMARG (Boneyard) designed?

3.  a) How does the U.S. military use the AMARG today?
b)  What is done with the aircraft stored at AMARG if not used for this purpose?

4.  What percent of the aircraft held at AMARG have been returned to flying in the past 25 years?

5.  Why are most of the aircraft held at AMARG vacuum packed?

6.  For what two reasons was the Davis-Monthan Air Force Base chosen to house the AMARG?

Visit the Davis-Monthan Air Force Base website at dm.af.mil/index.asp.

Immediately after World War II, the Army’s San Antonio Air Technical Service Command established a storage facility for B-29 and C-47 aircraft at Davis-Monthan AFB. Today, this facility is the 309th Aerospace Maintenance and Regeneration Group (309 AMARG), which has grown to include more than 4,400 aircraft and 13 aerospace vehicles from the Air Force, Navy-Marine Corps, Army, Coast Guard, and several federal agencies including NASA.  Visit the 309 AMARG page at the Davis-Monthan Air Force Base website at dm.af.mil/units/amarc.asp.