Google CEO denies any bias in the company 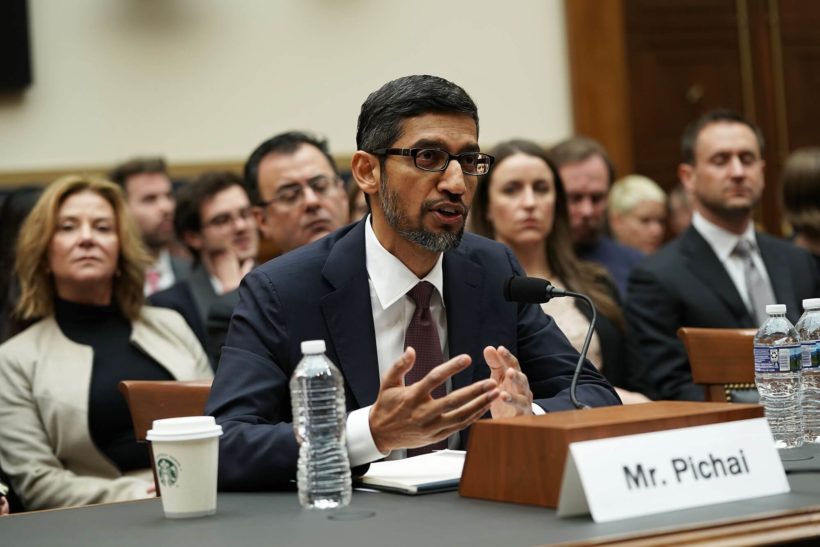 (by Crystal Woodall and Amber C. Strong, CBN News) WASHINGTON – GOP lawmakers pressed Google CEO Sundar Pichai on Tuesday over allegations of employees’ anti-conservative bias and how that may unduly influence the company’s business practices. … Pichai told House Judiciary Committee members he runs the corporation without partiality toward any ideology.

“By ranking pages, Google’s search always favors one page over another. This process, however, turns much more sinister with allegations that Google manipulates the algorithm to favor the political party it likes.”

“If you Google the word idiot under images, a picture of Donald Trump comes up – I just did that. How would that happen?” she asked the Google CEO.

“We try to rank and find the best results for that query.” Pichai replied.

“So it’s not some little man sitting behind the curtain figuring out what we’re going to show the user?” Lofgren said.

However, a study from Pew Research reveals concerns of bias are bipartisan. Researchers found that 85 percent of Republicans and 62 percent of Democrats believe social media companies intentionally censor viewpoints they find objectionable.

Even so, Pichai denied the charges.

“I lead this company without political bias and work to ensure that our products continue to operate that way,” Pichai said in his opening remarks. “To do otherwise would go against our core principles and our business interests. We are a company that provides platforms for diverse perspectives and opinions – and we have no shortage of them among our own employees.”

Critics say there’s so much evidence, in fact, that there’s now a whole movie about the controversial issue. It’s called “The Creepy Line” (see video under “Resources” below)

In the 80-minute documentary, former Google CEO Eric Schmidt explains that “Google policy on a lot of these things is to get right up to the creepy line and not cross it.”

“We saw how upset some of the top people in Google were, and for you to come in here and tell us, ‘There is no political bias in Google,’ tells us you’re either being dishonest – I don’t wanna think that – or you don’t have a clue how politically biased Google is,” Rep. Louie Gohmert (R-TX) charged.

Meanwhile, in a National Review op-ed, Kyle Smith explains how the tech giant keeps track of users both on and offline using what he calls a “surveillance business model.”

“Google knows more about you than your spouse does,” he wrote. “It even has drafts of emails you didn’t send. Oh, and they have the power to block information from reaching you, too.”

“Just by bumping undesirable stuff to the second page of search, Google can more or less make it disappear,” he continued. “Hey, good thing Google doesn’t have any overt political or cultural preferences you might not agree with, right?”

The Google chief also faced tough questions over whether his company was planning to build a search engine for China. The tech giant  pulled out of that country in 2010 in a high-profile dispute with its communist government’s policies.

Pichai indicated Google had no plans to do so “right now.”

Reprinted here for educational purposes only. May not be reproduced on other websites without permission from CBN.

1. What allegations about Google were being questioned during a House Judiciary Committee hearing on Tuesday?

3. What concerning fact did Democratic Rep. Zoe Lofgren question Mr. Pichai about?
b) How did Mr. Pichai respond?

4. What did a recent Pew poll reveal about Americans’ view of social media companies?

5. It was reported in September:
“Google has secretly built a prototype of a censored search engine for China that links users’ searches to their personal phone numbers, thus making it easier for the Communist government in China to monitor people’s searches.”
a) How did Google CEO Pichai respond to Congress members’ queries about this?
b) Google co-founder Sergey Brin claims to be a refugee from the Communist Soviet Union. How would you describe his considering providing a censored search engine to China?

“I lead this company without political bias and work to ensure that our products continue to operate that way. To do otherwise would go against our core principles and our business interests. We are a company that provides platforms for diverse perspectives and opinions – and we have no shortage of them among our own employees.”

Watch the video clip from an hour-long Google meeting recorded shortly after the 2016 presidential election, which was leaked to Breitbart News in September 2018. Excerpted from the Breitbart article:

The video of the Google meeting following the 2016 election reveals an atmosphere of dismay amongst the tech giant’s leadership, coupled with a determination to thwart both the Trump agenda and the broader populist movement emerging around the globe (including opposition to Brexit).

These individuals, who preside over a company with unrivaled influence over the flow of information, can be seen disparaging the motivations of Trump voters and plotting ways to use their vast resources to thwart the Trump agenda.

Co-founder Sergey Brin can be heard comparing Trump supporters to fascists and extremists. Brin argues that like other extremists, Trump voters were motivated by “boredom,” which he says in the past led to fascism and communism.

The Google co-founder then asks his company to consider what it can do to ensure a “better quality of governance and decision-making.”

VP for Global Affairs Kent Walker argues that supporters of populist causes like the Trump campaign are motivated by “fear, xenophobia, hatred, and a desire for answers that may or may not be there.”

(This follows an earlier September 2018 article that reported how Google tried to boost turnout among the Latino population to help Hillary Clinton, only to be dismayed as the usually solid Democratic voting bloc switched to the GOP in record numbers.)

Following the release of the video, Google said in a statement:

“Nothing was said at that meeting, or any other meeting, to suggest that any political bias ever influences the way we build or operate our products. To the contrary, our products are built for everyone, and we design them with extraordinary care to be a trustworthy source of information for everyone, without regard to political viewpoint.”

What do you think? Many/most Google employees are politically liberal. Should all Google users be concerned that Google (and other social media) have/will try to manipulate the data/information/posts users see? Explain your answer.

Stossel on “The Creepy Line” documentary: