Germany to Forsake Its Nuclear Reactors

(by Patrick McGroarty and Vanessa Fuhrmans, The Wall Street Journal, WSJ.com) BERLIN – Germany on Monday said it would close all of its 17 nuclear reactors by 2022, a sharp policy reversal that will make it the first major economy to quit atomic power in the wake of the nuclear crisis in Japan. 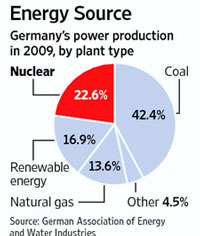 German Chancellor Angela Merkel announced that she plans to follow a government-appointed commission’s recommendation to shut eight of the country’s reactors immediately and close most of the others by 2021. Three plants may be kept online into 2022 as a source of reserve power, she added.

“After what was, for me anyway, an unimaginable disaster in Fukushima, we have had to reconsider the role of nuclear energy,” Ms. Merkel said, announcing the decision at a news conference with several of her cabinet ministers.  “This path sets out a great challenge for Germany,” she added, but “we can be the first industrial country to make the transition into an age of highly efficient and renewable energy.”

Germany’s move – marking a contrast with the U.S. and other countries that have largely stuck to plans to continue pursuing nuclear power – is a U-turn from a contentious plan that Ms. Merkel engineered just last fall that would have extended the lifetimes of some of Germany’s reactors into the 2030s, more than a decade longer than previously scheduled. Ms. Merkel’s latest move is effectively a return to an agreement to phase out nuclear power approved in 2002 by a center-left Social Democrat-Green coalition.

It’s unclear whether a formal ban on nuclear-energy imports will be a part of the final law, but Ms. Merkel has said that it would be senseless to scuttle Germany’s nuclear industry only to import electricity produced by reactors in neighboring countries.

Just days after the first explosion at Japan’s tsunami-stricken Fukushima Daiichi plant in March, Ms. Merkel shut down seven of Germany’s oldest reactors and ordered a review of its nuclear strategy. Germany’s youngest nuclear-power plant, the Neckarweistheim II reactor north of Stuttgart, went online in 1989. The government’s decision Monday, based on the outcome of that review, marks the most dramatic shift yet in a nation’s nuclear-energy policy in reaction to the Japanese crisis. Switzerland’s government also has approved a plan to decommission its nuclear plants. Under the Swiss plan, however, the nuclear phase-out may not be completed until well after 2030.

But apart from Japan, which has quit plans to build more reactors, few countries have altered long-term nuclear energy policies. Many, instead, are still examining how or whether to proceed with plans for new reactors. More than 150 are planned world-wide, in addition to the 64 under construction, according to the International Atomic Energy Agency. China, Taiwan and Italy have suspended plans for new reactors, pending safety reviews, while the U.S. and the U.K. have also conducted reviews.

On Monday, the Obama Administration repeated that the U.S. intends to push ahead with efforts to revive the U.S. nuclear-power industry while learning lessons from the accident in Japan. “The administration is committed to increasing our nation’s clean energy share through a broad range of energy sources,” White House spokesman Clark Stevens said. President Barack Obama, whose home state of Illinois relies on nuclear power for nearly half its electricity, has long supported expanding nuclear energy as part of an effort to increase power sources that emit little or no carbon dioxide. 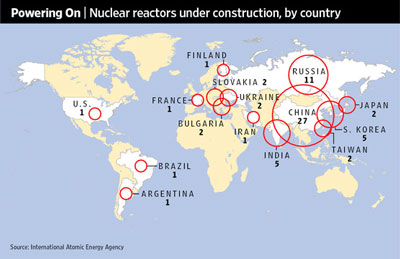 Since the Japan accident, the Nuclear Regulatory Commission, which oversees civilian uses of nuclear power in the U.S., has been conducting special investigations of nuclear reactors. The chairman of the U.S. Nuclear Regulatory Commission, Gregory Jaczko, has expressed confidence in the safety of U.S. nuclear reactors, but recently threw the industry a curve by saying there are “technical issues” with a new type of reactor some U.S. operators are using for their next-generation nuclear plants.

Germany’s largest neighbor, France – where nuclear energy makes up three-quarters of the electricity mix – said Ms. Merkel’s move wouldn’t sway its nuclear policy. “I respect the choice that Germany made,” French Prime Minister François Fillon said in Strasbourg on Monday, but “it’s not the choice that we are making-we think that nuclear energy is a solution for the future.”

In few countries is nuclear energy the hot-button issue it is in Germany, where polls show some 70% of the populace opposes it, the legacy of a broad-based antinuclear movement that harks back to the 1986 Chernobyl accident. Since the Fukushima accident, antinuclear protests have taken place across the country. …..

German industry leaders, while not surprised by the announcement, lashed out at what some called a politically driven decision that would increase energy prices and threaten German competitiveness.

Dieter Zetsche, chief executive of Germany luxury car maker Daimler AG, aired qualms about Germany’s shift in nuclear policy. “People expect orientation, and with that in mind, too many changes in direction are to be viewed critically,” Mr. Zetsche said in an interview in the German tabloid Bild-Zeitung. Mr. Zetsche added that the huge power requirements of Germany’s heavy manufacturing companies-a pillar of its economy-need to be considered alongside the concerns raised by the Fukushima disaster.

Germany’s electricity prices, which have more than doubled in the past decade, are a sensitive issue for industry, whose domestic sites consume nearly 50% of the country’s electricity.

Currently, Germany derives 42.4% of its energy supply from coal-fired plants, but phasing out nuclear power, which now makes up nearly 23% of the country’s energy supply, could force it to rely more on coal. The big variable is the cost of natural gas, the preferred, cleaner alterative. But procuring cheaper gas from other countries is complicated, in part because long-term contracts that many German utilities have signed with Russia lock them into a price tied to the price of oil.

Shares in German utilities E.ON and RWE AG, which operate most of Germany’s 17 nuclear reactors, fell sharply Monday on news of the plan. Though the utilities will no longer reap the potential profits of operating their nuclear plants longer, the government said they will still be subject to a new tax on nuclear-fuel rods introduced this year to offset those potential gains.

1.  What decision has German Chancellor Angela Merkel made about Germany’s nuclear power plants?

2.  What is significant about Germany’s decision?

3.  Why has Chancellor Merkel changed her position on nuclear energy and implemented this new policy?

4.  How are other countries responding to Japan’s nuclear crisis (including the U.S., France, Switzerland, etc.)?

5.  What percent of France’s electricity comes from nuclear power?

8.  What challenges will Chancellor Merkel’s decision create for the electric companies in Germany? (see para. 16)

NOTE:  “Answers by Email” has ended for the summer–daily news postings will end June 10th — have a great summer!

NUCLEAR POWER IN THE U.S.