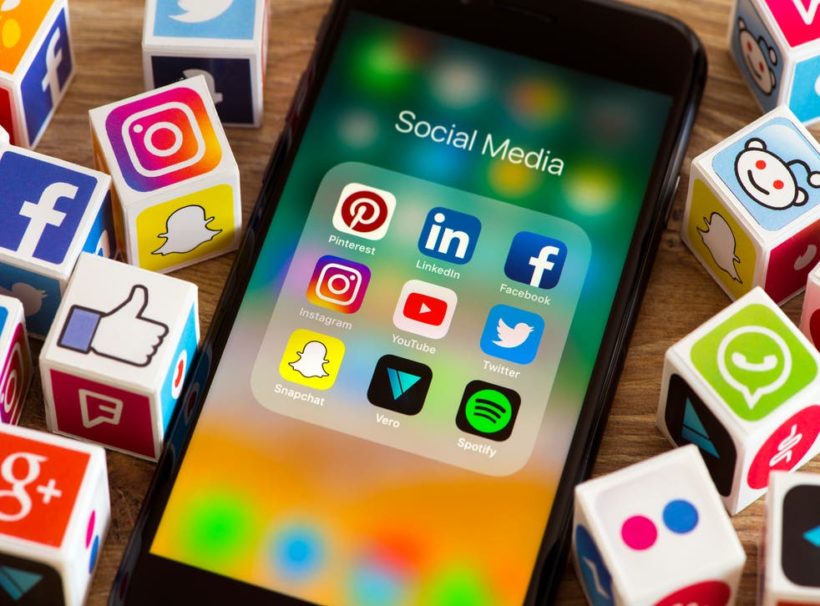 The governor made lengthy comments from Tallahassee Tuesday morning about big tech companies, saying that Floridians deserve to have their online data and their ability to participate in social media online protected.

“It’s high time that we step up to the plate to ensure the protection of the people and their rights,” DeSantis said, while standing alongside legislative leaders at the Florida Capitol.

He said [“these platforms have changed from neutral platforms that provided Americans with the freedom to speak to enforcers of preferred narratives. Consequently, these platforms have played an increasingly divisive [creating great disagreements, disunity] role in elections and have negatively impacted Americans who dissent from orthodoxies favored by the Big Tech cartel.”]

“As these companies have grown and their influence expanded, big tech has come to look more like Big Brother with each passing day,” DeSantis said.

Florida’s Speaker of the House Chris Sprowls tweeted, “If democracy is going to survive, we must stand up to Big Tech oligarchs and demand transparency. Proud to stand with @GovRonDeSantis [and others] to roll out our proposal to give users control of a type of modern-day public square” (and included the image below in his tweet) 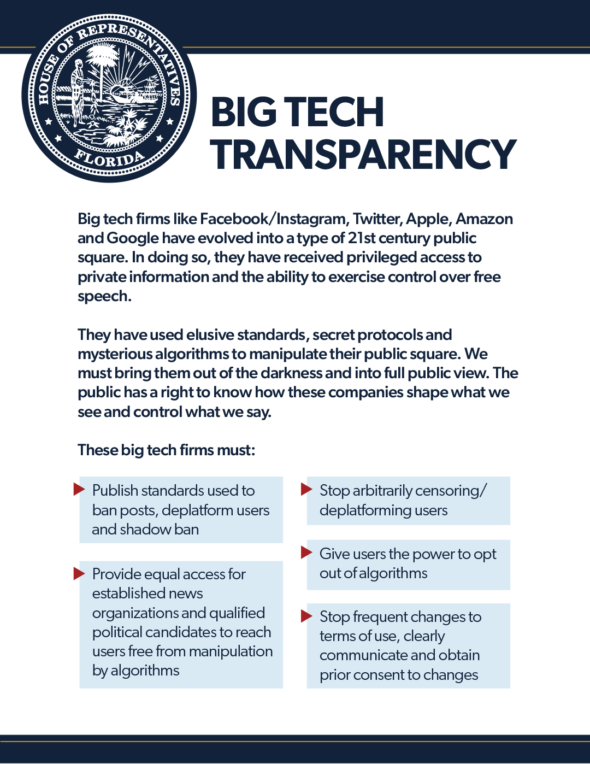 The companies have been the subject of criticism after they suspended then-President Trump from their platforms [last month] and removed [Twitter alternative] platform Parler [which was founded by a libertarian]. (Apple and Google removed the Parler app from their app stores, then Amazon web services kicked Parler off their servers, effectively shutting down the company, which was a platform that did not censor comments.)

[DeSantis said, “When 2.8 million Americans chose to download the application Parler and share information with friends, family, and colleagues, what was the result of that? Canceled by Amazon, Google, and Apple”].

The governor said Trump being taken off Twitter was a double standard since other people like the Ayatollah Khamenei of Iran still have an account despite calling for the destruction of Israel. … “No group of people should exercise such power, especially not tech billionaires…”

Saying that the legislation will address “censorship” and “deplatforming,” DeSantis said he plans to tackle “viewpoint discrimination” against conservative voices and force big tech companies to be transparent about their regulation of content.

“When a social media company applies these standards unequally on users, this is discrimination, pure and simple,” DeSantis said.

He said legislators seek to do the following things this term:

During his speech, the governor also took aim at the election, saying that the companies have been altering algorithms to give a leg-up to the candidates of their choice.

That’s why DeSantis said the proposed legislation would also seek to penalize companies who “deplatform” a candidate for elected office in Florida.

“Under our proposal, if a technology company deplatforms a candidate for elected office in Florida during an election, the company will face a daily fine of $100,000 until the candidate’s access to the platform is restored,” DeSantis said.

As part of that, any company that promotes a candidate for office against another candidate must record the value of that free promotion as a “political campaign contribution.”

Companies could also face daily fines for using algorithms to promote or suppress content related to a particular candidate or cause.

“The message is loud and clear,” DeSantis said. “When it comes to elections in Florida, big tech should stay out of it.”

The governor pushed back on the notion that the media did not run more Hunter Biden stories because they thought the information came from hacking or was dispersed by foreign governments and “wanted to beat Trump.”

…When asked what he thought about President Trump’s comments surrounding the riot at the U.S. Capitol on Jan. 6 and whether or not he believed Trump’s repeated [assertion that] the election being “stolen,” DeSantis pointed to comments made by others in 2016.

The governor [noted] that people were allowed to tweet false information about the investigation into collusion between President Trump and Russia.

“To not deplatform some but then to deplatform others when they’re making claims, I just don’t see how that would be fair,” DeSantis said. “But those claims of collusion [between Trump and Russia that were proved false] were amplified by big tech. They were amplified by social media for years. It was the dominant point of discourse in our country and it was without a factual basis.”

Published at ABC27’s WTXL .com. Reprinted here for educational purposes only. May not be reproduced on other websites without permission.

NOTE TO STUDENTS: Before answering the questions, watch the videos under “Resources” below.

4. What will the proposed “Transparency in Technology Act“ legislation do, according to Gov. DeSantis?

5. How do social media companies/big tech discriminate against conservatives and Trump supporters?

6. a) What do social media companies do during elections to give the candidates they support an advantage over the other candidates?
b) How will Florida address this in the proposed legislation? Be specific.

7. a) What do you think of Florida Gov. DeSantis’s assertions about big tech?
b) Do you think every state should pass legislation to protect Americans from online social media censorship? Explain your answer.

8. a) Why should every American be highly concerned by big tech’s censoring/deplatforming of people with whom you disagree politically?
b) Ask a parent the same question.

CHALLENGE: Consider the video (at the bottom of the article page) on Section 230–the 1996 Communications Decency Act.

Donald Trump and his supporters say Section 230 should be eliminated as it allows big tech’s liberal bias and has granted Big Tech almost blanket immunity.

DeSantis called for open, robust debate on issues that affect Americans rather than the outright censorship that big tech companies are currently engaging in. The governor said that companies are discriminating against citizens when they change their rules as it suits them, without warning or consistency.

Tech companies would have to give users advance notice of a rule change and before shutting down an account and apply the rule consistently.

“And lastly, [if] a technology company uses their content and user-related algorithms to suppress or prioritize the access of any content related to a political candidate or cause on the ballot, that company will also face daily fines,” DeSantis added.

Florida’s House Speaker Chris Sprowls said, “With our proposal, we are going to bring into the sunshine what I call the five families of darkness:

“Facebook, Twitter, Google, Amazon, and Apple… have access to private information and the ability to exercise control over individuals’ free speech. We’re pushing the barriers to finally call out their convoluted and inconsistent standards for censoring, banning, and de-platforming.” 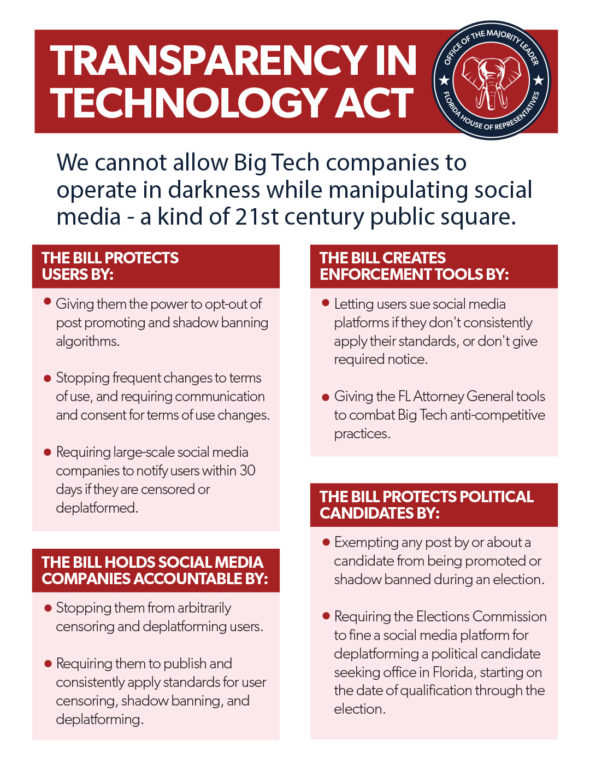