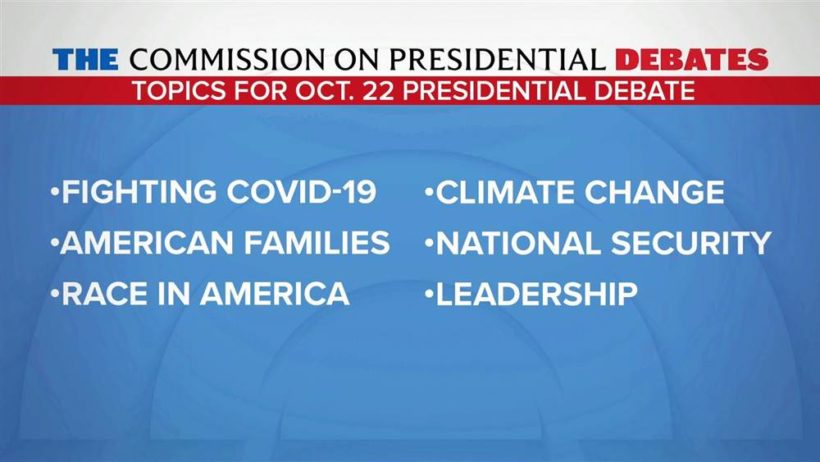 (Compiled from NBC News and CNN) – President Donald Trump and Joe Biden will have their microphones cut off during Thursday’s second and final presidential debate while their opponent delivers initial two-minute answers to each topic, the Commission on Presidential Debates announced Monday.

The Commission said both microphones will be on, however, during open-discussion segments of the debate.

Trump and Biden’s only previous debate last month saw frequent interruptions mainly from the president, leading to the Commission changing the debate rules to allow the moderator to cut off each candidate’s microphone while his opponent spoke.

The commission said in its statement that both camps had already agreed to each candidate having two minutes of uninterrupted time to make remarks at the beginning of each 15-minute segment of the debate, that it was enforcing the rules and not making a complete rule change.

The final debate between Trump and Biden is scheduled to take place from 9 to 10:30 p.m. ET in Tennessee. The format is the same as the first debate: Each segment will last about 15 minutes, and the candidates will have two minutes to respond after the moderator, NBC’s Kristen Welker, opens each segment with a question. Welker will then use the rest of the time in the segment to facilitate further discussion on the topic.

Prior to the mic announcement, the Commission on Presidential debates announced the six topics for the debate.  The topics are:

Trump’s campaign manager Bill Stepien sent a letter objecting to the selected topics for Thursday’s debate and said that both campaigns had agreed that the subject would be foreign policy. It said that other topics benefit Biden and that there is little focus on foreign policy.

“It is completely irresponsible for the Commission to alter the focus of this final debate just days before the event, solely to insulate Biden from his own history,” Stepien wrote in a letter to the debate commission.

Stepien also wrote in the letter in part to the Commission:

We write with great concern over the announced topics for what was always billed as the “Foreign Policy Debate” in the series of events agreed to by both the Trump campaign and Biden campaign many months ago.

The topics announced by moderator Kristen Welker (Fighting COVID-19, American Families, Race in America, Climate Change, National Security, and Leadership) are serious and worthy of discussion, but only a few of them even touch on foreign policy.

Indeed, almost all of them were discussed at length during the first debate won by President Trump over moderator Chris Wallace and candidate Joe Biden.

As is the long-standing custom, and as had been promised by the Commission on Presidential Debates, we had expected that foreign policy would be the central focus of the October 22 debate. We urge you to recalibrate the topics and return to subjects which had already been confirmed.

Biden’s campaign did not immediately comment on the change but disputed that the campaigns had agreed on a foreign policy focus.

“The campaigns and the Commission agreed months ago that the debate moderator would choose the topics,” TJ Ducklo, the Biden campaign’s national spokesman, said. “The Trump campaign is lying about that now because Donald Trump is afraid to face more questions about his disastrous Covid response.”

(Compiled from NBC News and CNN)

1. What topics did the Commission on Presidential Debates choose for the final debate?

2. What topic did the Trump campaign say had been agreed upon for this debate?

3. How did the Commission respond to the campaign’s letter?

4. How did Joe Biden’s campaign respond?

5. Trump’s campaign manager Bill Stepien wrote Monday in a letter to the Commission on Presidential Debates that the debate “was always billed as the ‘Foreign Policy Debate’” as was “agreed to by both the Trump campaign and Biden campaign many months ago.”
Read the letter Mr. Sepien sent to the Commission.
Do you think he makes valid points or is unreasonable? Explain your answer.

7. What do you think the purpose of a political debate is / should be?

1. List a question moderator Kristen Welker asked on each of the six topics in the debate:

2. What do you think of each candidate’s initial answer?

3. A debate moderator’s role is to act as a neutral participant, to hold participants to time limits and to try to keep them from straying off the topic of the questions being raised in the debate. Do you think Kristen Welker fulfilled this role? Explain your answer.

5. Do you think the moderator’s questions were fair to each candidate? Explain your answer.

“The Commission on Presidential Debates is supposedly bipartisan w/ an equal number of Rs and Ds. I know all of the Republicans and most are friends of mine. I am concerned that none of them support @realDonaldTrump. A biased Debate Commission is unfair,” Dole tweeted.

Background on the 2020 debates. Three 90 minute presidential debates were scheduled.

1st Debate, Sept. 29: Fox News’ Chris Wallace moderated the first debate. He chose the topics and released them one week before the debate. They included:

Mr. Wallace partly ignored his list and asked a question about climate change and spent 10 minutes of the 90 on this unannounced section. Wallace is known to dislike Trump; Trump supporters felt Mr. Wallace spent half the time debating Trump himself; Biden supporters had no problem with Wallace.

2nd Debate, October 15: After the president returned from the hospital where he was treated for Covid, the Commission on Presidential Debates announced the 2nd debate would be virtual, with each candidate off-site and only the debate moderators and some audience members on-site. The president said as his doctors declared him covid free he would not participate in a virtual debate. The Commission then canceled it: Biden then scheduled a town hall with ABC for that night and Trump then accepted a town hall with NBC at the same time.

The original moderator for the cancelled 2nd debate was C-SPAN’s Steve Scully. Scully, a former intern for Joe Biden asked (in what he thought was a private tweet) anti-Trumper Anthony Scaramucci for advice on how to “respond” to Trump during the debate. Scaramucci replied. Scully then claimed his Twitter account had been hacked when he realized it was public. When it became evident that Scully was lying, he admitted it. C-Span then suspended Scully indefinitely.

NBC News correspondent Kristen Welker is the moderator. She is viewed as biased against Trump; her family has donated tens of thousands of dollars to Democratic candidates, including $20,000 to former President Barack Obama and Biden’s 2020 campaign, according to a report from the New York Post.; she deleted her Twitter page after Steve Scully of C-Span was suspended. Trump supporters believe she is biased against Trump. The media across the board dismisses these assertions of bias on the part of the moderators. 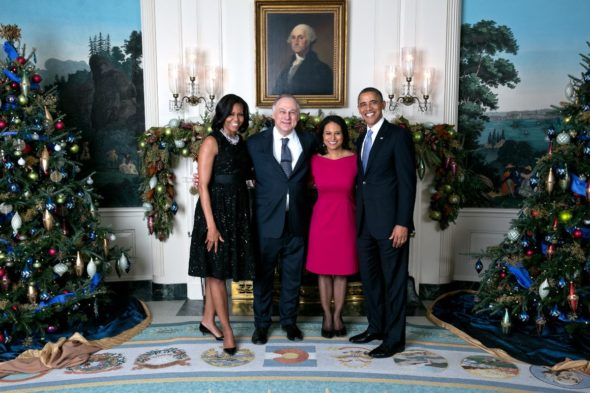