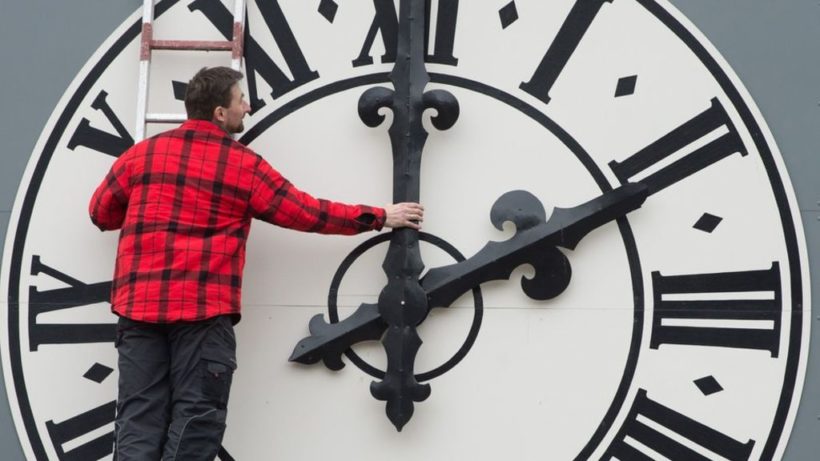 A technician changes a clock on a church in Dresden, Germany in March 2018. (Photo: Sebastian Kahnert/AFP/Getty Images)

(Compiled from articles at Sky News, BBC, DW and Reuters) –The European Union’s parliament on Tuesday voted by a large majority to end Daylight Saving Time in the EU by 2021.

Under the Commission’s proposal, initially planned for this year, EU countries would not be able to change their clocks forward and backward during the year in future, but would be free to decide which time zone they wanted to be in.

From April 2021, governments opting to make Summer time (Daylight Saving time) permanent would adjust their clocks for the last time on the last Sunday of March 2021.

For those choosing permanent Standard time the final clock change would be on the last Sunday of October 2021.

All 28 member states would need to inform the European Commission of their choice ahead of the proposed switch, by April 2020. The Commission stressed that states must co-ordinate their choices, to minimize the risk of economic disruption from a patchwork of different time systems.

Politicians passed the measure by 410 votes to 192 – meaning seasonal time shifts, which were introduced during World War One to save energy, will end in 2021.

The practice of switching clocks was first introduced in World War One and brought back during the 1970s oil crisis, aiming to save energy by prolonging evening daylight in summer.

Fewer time differences, it was argued, would facilitate cross-border trade and travel in the EU. The extra daylight hours in summer could reduce spending on artificial lighting and help outdoor leisure activities.

But the energy savings from DST have proven to be quite marginal. And some of the EU’s major trading partners – among them China, Russia and Turkey – do not operate under DST.

The UK government has indicated it will stick to the current system of seasonal changes after it leaves the European Union (Brexit).

The majority of countries outside Europe and North America do not adjust their clocks twice a year.

Compiled from articles at Sky News, BBC, DW and Reuters.  Reprinted here for educational purposes only.

5. Florida has proposed a bill to make Daylight Saving Time permanent. The U.S. has gone through periods of year-round daylight saving time, once from 1942 through 1945 and again from 1974 through 1975. Ask a teacher and a parent which they prefer – and to explain their answer:

In the United States, President Trump recently said he approved of making daylight saving time permanent after it was suggested in legislation introduced by Florida lawmakers.

Hawaii and most of Arizona do not observe daylight saving time. (The Hill)

In Australia, daylight savings has featured in some parts of the country since at least 1971, but every year it causes a nation-wide debate about whether all states and territories should join in on winding the clock forward.

Farmers have long protested against it, arguing it cuts productivity. Dairy farmers say the cows never adapt to the new schedule. (from Australia’s SBS News)

Finland called for daylight saving to be abolished EU-wide, after a petition gathered more than 70,000 signatures from citizens calling for such a change.

Opposition to the clock changes tends to be greater in northern countries, where seasonal differences in daylight hours are greater than in the south.

In June, Finland has 18.5 hours of daylight, but in December only 5.5 hours. The corresponding figures for Greece are 14.5 hours and 9.3 hours. Yet both countries are in the same standard time zone – Eastern European Time (GMT+2). What are the EU’s time zones? (from BBC News)

During the winter, spring and autumn, when DST is not applied, there are three standard time zones: