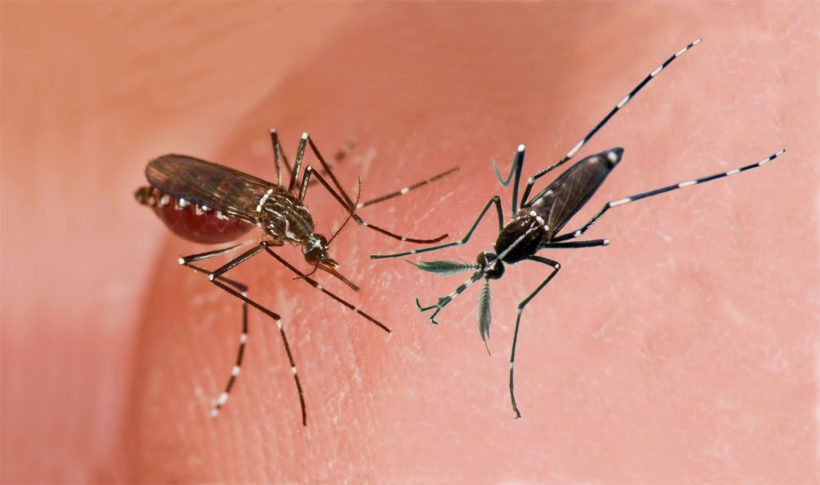 (by Bonnie Burton, CNET.com) – On Nov. 3, the Environmental Protection Agency (EPA) approved a new approach from the biotech company MosquitoMate to eradicate certain mosquitoes. The goal is to destroy populations of wild mosquitoes that could be carrying (yellow fever, dengue and Zika) viruses, according to a report from Nature magazine.

Instead of relying on genetic engineering, MosquitoMate infects lab-grown mosquitoes with the common bacterium Wolbachia pipientis, which affects mosquitoes but not animals or humans.

[The company will rear the infected mosquitoes in its Kentucky lab, sorting non-biting males from females. Then those males will be released at treatment sites to mate with wild females, producing eggs that don’t hatch because the paternal chromosomes don’t form properly due to the effects of the bacterium. The idea is that over time, as more male mosquitoes are released to mate with wild females, the population dwindles—without having to resort to pesticides that are not only harmful to people and the environment, but rapidly dwindling in efficacy (effectiveness)].

MosquitoMate plans to release its insects this summer in 20 US states and Washington DC, starting with Kentucky (where the company is based).

[One drawback is that] the MosquitoMate lab techs still have to separate the male from the female lab-grown mosquitoes by hand. The process is time consuming to say the least.

Considering that it must take millions of these lab mosquitoes to be released in a city in order to suppress the population of wild mosquitoes, the company will probably have to consider creating a faster more efficient way of separating the sexes.

“Unlike traditional mosquito control, we don’t show up after you have a problem,” according to MosquitoMate’s FAQ. “By acting proactively, your population of Asian Tiger mosquitoes will not reach a nuisance level.”

Reprinted here for educational purposes only. May not be reproduced on other websites without permission from CNET. Visit the website at cnet .com.

NOTE: The tiger mosquito is native to Asia. It is believed the species spread to the Western Hemisphere as a result of the international trade in used tires. The United States imports millions of tires from Asia due to the high rubber content of Asian tries, for remanufacturing purposes. Tiger mosquitoes are closely associated with used tires, which are used as sites for egg deposition and larval development. It is likely that tires imported to Houston, Texas from Japan in 1985 brought tiger mosquitoes to the United States. The trade of used tires within the U. S. has dispersed the mosquito throughout the eastern and midwestern states. (from mda.maryland.gov)

2. When/how did the Asian tiger mosquito most likely first appear in the U.S.?

3. What is the goal of the biotech company MosquitoMate?

4. How will MosquitoMate accomplish this goal? Be specific.

5. When and where will MosquitoMate conduct its release?

6. What challenge does the company face in rolling out on a large scale?

7. What is your reaction to this solution that addresses the problem of deadly virus carrying mosquitoes?

The EPA restricted the release of MosquitoMate’s product, called ZAP males, to 20 states and Washington DC. The agency has previously said that those places “are similar in temperature and precipitation to areas where efficacy of the ZAP males was tested” — Kentucky, New York and California. The EPA decision excludes much of the southeastern United States, which is home to dense populations of mosquitoes and a long mosquito season, because MosquitoMate did not conduct field trials there.

MosquitoMate plans to begin selling its mosquitoes locally, in Lexington, and will expand from there to nearby cities such as Louisville, Kentucky, and Cincinnati, Ohio. The company will work with homeowners, golf courses, hotels and other customers to deploy its insects, according to Dobson. “Now the work starts,” he says.

The company will have to start small. Suppressing the mosquito population of an entire city is likely to require the weekly production of millions of these mosquitoes. To reach that level, Dobson’s company must find a way to efficiently separate male mosquitoes from females. The company’s technicians now separate them both by hand and mechanically, Dobson says.

Another group that is also developing mosquitoes infected with Wolbachia to control wild populations has succeeded in producing large quantities of their insects. Researchers from Sun Yat-sen University in Guangzhou, China, and Michigan State University in East Lansing say they are releasing 5 million Wolbachia-infected A. albopictus each week in Guangzhou.

The scientists use mechanical sorters to separate males from females, on the basis of size differences at the pupal stage, at more than 99% efficiency, says Zhiyong Xi, a medical entomologist and microbiologist at Michigan State University, who leads the project. They expose the remaining mosquitoes to X-ray radiation at a dose that sterilizes any remaining females, but is too low to affect the males. (from nature.com)

Read about the Asian Tiger mosquito