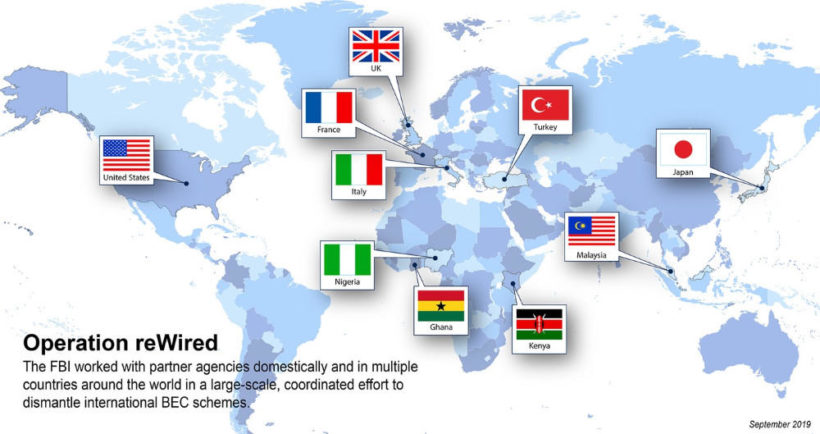 (by Bart Jansen, USA Today) WASHINGTON – Ever wonder what became of the Nigerian romantic in a financial jam or the lottery winner who needed your help to claim his winnings?

The Justice Department announced Tuesday that it had arrested 281 of them – including 74 people in the United States – and charged them with wire fraud, money laundering and other crimes for a wide range of digital scams designed to prey on the unsuspecting. The arrests were part of a four-month crackdown on digital schemes called Operation reWired. (See Justice Department report.)

The scams tended to target real-estate buyers, the elderly and others by convincing them to make wire transfers to bank accounts that the suspects controlled, according to the department. The suspects would impersonate a key employee to make a transfer after gaining access to the victim’s email account, or perhaps sensitive employment or tax records, often through romance or lottery scams, according to the department.

The arrests included 167 people in Nigeria, 18 in Turkey, 15 in Ghana and others in France, Italy, Japan, Kenya, Malaysia and the United Kingdom. Authorities seized nearly $3.7 million, the Justice Department said.

“Anyone who engages in deceptive practices like this should know they will not go undetected and will be held accountable,” Deputy Attorney General Jeffrey Rosen said in a statement.

Attorney General William Barr has called fraud against the elderly a “massive problem” that is often perpetrated by transnational criminal organizations. The cost can be especially high and the losses catastrophic for the elderly, he said in a March speech.

“We have to prosecute an all-out attack on these despicable crimes,” Barr said.

The latest enforcement effort followed one called Operation Wire Wire announced in June 2018 that resulted in the arrest of 74 people, the seizure of nearly $2.4 million and the recovery of about $14 million in fraudulent wire transfers.

The scams prosecutors alleged in the latest series of arrests included:

• Romance: where victims were tricked into sending or laundering money under the guise of helping a paramour with an international business transaction.

• Employment: where victims provided their personal identification numbers and then overpaid, so that they had to send back the apparent excess funds to the employer.

• Online sales: where victims were persuaded to buy nonexistent goods and prepaying with gift cards.

• Rentals: where victims receive a bad check in excess of an agreed upon deposit and are asked to refund the extra before the check bounces.

• Lotteries: where victims convinced they’ve won an international lottery must pay fees or taxes before receiving the payout.

Many of the suspects have either pleaded not guilty to the charges, or were arrested so recently they had not yet formally appeared in court to enter a plea.

“The FBI is working every day to disrupt and dismantle the criminal enterprises that target our businesses and our citizens,” FBI Director Christopher Wray said.  “Cooperation is the backbone to effective law enforcement; without it, we aren’t as strong or as agile as we need to be.”

Published at USAToday .com on September 10, 2019. Reprinted here for educational purposes only. May not be reproduced on other websites without permission from USA Today.

1. a) How many people were arrested this week in worldwide email scams?
b) What charges did the U.S. Justice Department bring against those arrested?

2. How did the scammers trick people into giving them money?

3. In addition to the U.S., in what other countries were scammers arrested?

4. Some of the scammers also stole identities. How many identities did they steal? What did they do with the information?

5. How did most of the suspects plead?

6. What do you think is a just punishment for this type of crime? Explain your answer.

Watch an August 22 CBS report on previous arrests made in August: